To save a prince – Anglo-zulu war

Last Sunday the lads at the club played an epic game was set in the heart of Zululand in the closing stages of the war, but our Zulu’s were still very aggressive and active in the defence of their homeland. On one side was the British Imperial forces consisting of six companies of infantry (two companies of 3/60thRifles and four companies of the 3rdRegt. of Foot), two troops of Mounted Infantry, a section of RA, a Naval Brigade detachment, one troop of the 1stDragoon Guards, one troop of the 17thLancers, a small Commando of Boers and a mixed troop of Natal Mounted Police and Newcastle Mounted Rifles.

On the Zulu side the left horn consisted of four units of warriors, the right horn – six units of warriors and the head another six warrior units. In addition, there were three small units of Zulu skirmishers armed with rifles.

Concerning the rules, we utilised the basic Black Powder rules with a few additions from other rule systems, including the Sand of the Sudan play cards, which certainly made for a fun game and the move system from Sword & the Flame (using the roll of the dice to determine movement distance).

The game started very well for the British forces as they managed to maintain the initiative for the first three turns and the Prince Imperial headed off back to the British lines quite rapidly as too did the Mounted column, which managed to gain a toe hold on the Zulu side of the river in those first turns……however, with each turn and with each draw of the cards the Zulus were soon appearing in mass. Additionally, a wheel fell off one of the RA guns and it would take six turns to repair, the Prince Imperial was affected by a slight case of heat stroke and he took his team off the track and into the brush, and then the local Zulu village on the British side of the river decided to join their brothers and charged from their village into a British Infantry company. Not only that but once the fight to hold the river against the Zulus one of our most effective weapons with the Navy lads, the Gatling gun, was forever jamming ……it was very frustrating for the British commanders.

In the end the British Infantry lads managed to hold both river crossing, but the cost was very high, a gun was lost (because they could not get their wheel fixed in time), the Boers were cut down to a man (they never had a chance) and the Prince Imperial, though he survived the days battle (but lost not only his horse but his two companions to Zulu bullets and spears) he still did not make it the British side of the river.

Thanks go to Brian Buskell and David Lowe (the Zulu Commanders) and Tim Jolly (our British Commander) for the afternoon fun and gamesmanship. Figures belong to the collections of Myself, Brian Buskell, David Lowe and John Maguire. The figures are all 28mm and come from a mixed ranged of mainly Empress Miniatures, Warlord Games, Foundry and Old Glory Miniatures. 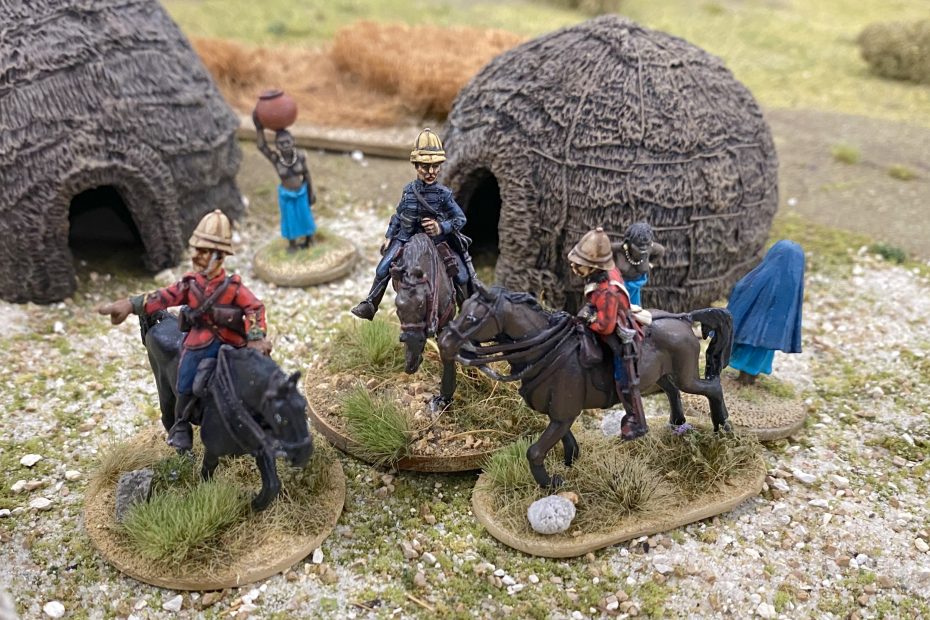