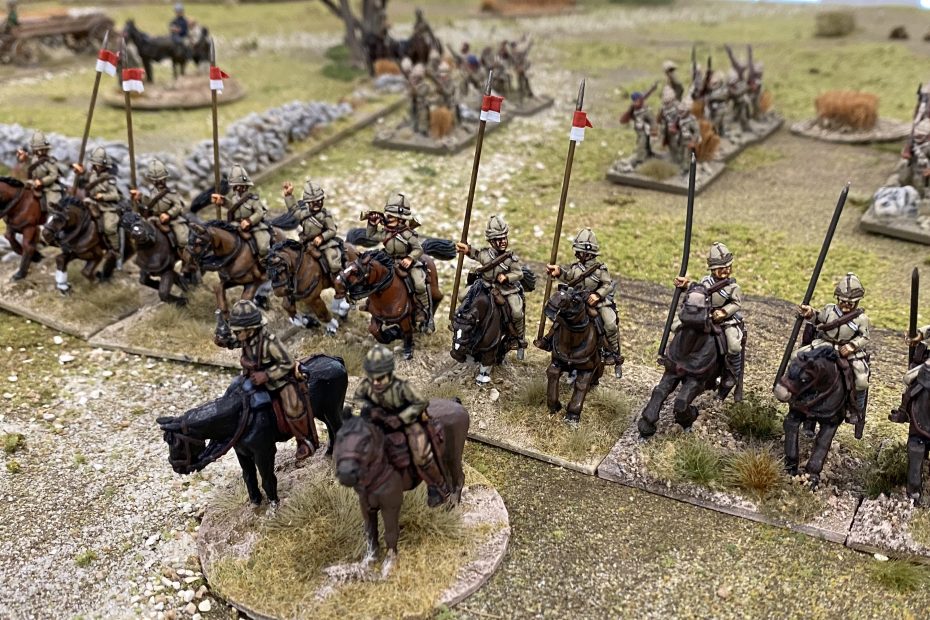 Last Sunday Myself and a couple of local lads, Brian Buskell, Tim Jolly and David Lowe, got together and played a small 2ndBoer War game using the Blackpowder 2 rule set. The scenario was for the British column to support a supply wagon across a river crossing and through to a small besieged garrison (off table). And the Boer forces, as you can guess, was to prevent the British getting through.

Boer forces were considerable smaller in numbers and consisted of two Kommandos, one with four units and the other with three. A wagon laager was also deployed but hidden from view with another small unit of Boer Wagon drivers protecting it. Finally, the Boers also had two Pom-Pom guns deployed to cover the two approaches across the river and a Boer Marksman with the role of trying to shoot the British commanders.

To start the game, I asked the Boer Commandant (Dave) to draw a map and preposition his Pom Pom guns, one of his Kommandos and his marksman. The other Kommando was designated to conduct a flanking attack on the British troops on turn six.  With the map drawn the game was soon on in earnest.

Turns one through to four saw the Mounted Bushman spread out across the table scouting out any possible locations of hidden Boers. Soon the Boer marksman was spotted hiding in and around a deserted Boer farm. A unit of Bushmen was dismounted and order to lay down some supressing fire in order to pin him in place.  Another two units of Bushmen spread out to clear a small Hill (Kop?) situated on the left flank of their march. The high ground was soon cleared however, hidden on the other side in a small copse of trees was another unit of Boers.

The Boers opened up fairly effective fire on the Bushmen, who at the time were still mounted. The Bushmen though taking some heavy fire from the hidden Boers did manage to hold their grown and in turn fired on the Boers pinning them in place for an effective charge to be made by a supporting unit of British Mounted Infantry. The Boers, realising they were going to be overrun quickly withdraw from their position and were forced off the table.

The small victory the British forces was short lived as the forward movement soon brought the British troops and range of the Boer Pom Poms. The Pom Poms were to prove the decisive weapon of the battle as they were able to successful fire on and pin down various British units without receive any effective counter battery fire from the enemy.

Turns six through to eight saw the Boers launch their long-awaited flank attack, which caught the British with their pants down. The Boer flanking Kommando was soon laying down some very accurate fire on not only the British artillery but also hitting a British lancer unit and one British Infantry column in the flank. The lancers were soon seen rushing to the rear and the British infantry suffered such heavy casualties that they had to fall back, taking no further in the game.

However, the British commander was quick to react and ordered the artillery to deploy and engage the closer Boer unit with case shot and then just as quickly ordered the last remaining lancer squadron to charge the Boers closest to the guns. Well what a charge………the Boers stood their ground, unable to pull back and decided to fight it out. They soon delivered a volley of well-aimed shots felling many a lancer from his saddle and then as by some grace of God won the melee!!! The Lancers went back in retreat.  The British Commander could not believe what was happening. He called for his last reserve of troops close at hand and order two companies of infantry to push back the Boer flanking attack.

The British Tommie proved his worth wit the bayonet and drove back two Boer units from the hill. Another Mounted Bushmen unit was also successful in attacking the Boers, hitting them in the flank and taking many prisoners.  Things were finally looking up for the British Commander.

However, in the last three turns of our game the British troops were not able to push much further ahead to achieve their mission. Though one unit of Mounted Infantry was able to make it to the river after a vicious hand to hand fight with a few Boers stuck on the British side of the river, they were the ‘High Water Mark’ of the British advance. The Boer Pom Poms proved to good at suppressing the enemy and managed to deter the British from making any further advances.

After a long hard battle, the Boers were victorious, two British columns were in taters and had sustained heavy casualties and the last remaining British troops were to few in numbers to make any further effective attacks. The Boers had also suffered heavily with their flanking Kommando suffering 2/3 causalities, but they had won the day by stopping the British supply column getting through. Well down to the Boer Commander (Dave) and to Brian and Tim for playing the British. The majority of figures are from the extensive Old Glory 28mm range and the remainder are a mix of Wargames Foundry and Empress Miniatures. The Boer troops are from my collection and the British are from Brian Buskell’s collection.