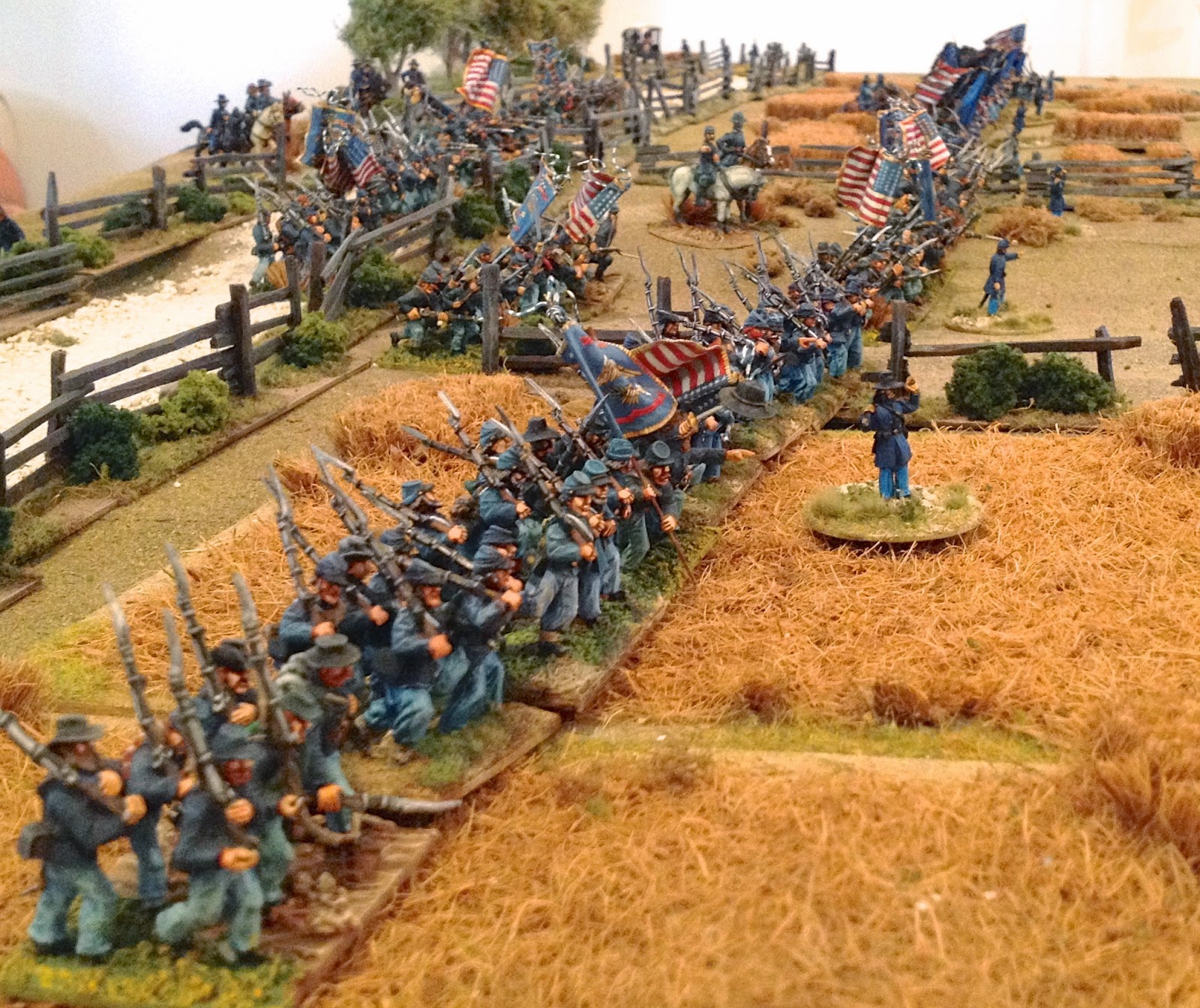 The Struggle for the Wheatfield – Gettysburg 2nd July 1863

Yesterday Myself, Brian Buskell and Dave Lowes had a fantastic game of Regimental Fire & Fury. The scenario for the day was ‘The Struggle for the Wheatfield’- Gettysburg 2nd July 1863, which I pulled from ‘The Maps of Gettysburg’ by Bradley Gottfried. We used page 171 for the initial and fought it through until the arrival of Wofford’s brigade on the Federal right flank.

Our battle was as bloody as it was on the day with the Federal brigades pushing across the Wheatfield and eventually forcing back Anderson’s Georgian brigade. However Kershaw’s and Semmes brigades proved to strong for Caldwell’s Division and by our last turn three of his brigades had taken massive causalities and were withdrawn from the battle. With the lost of Caldwell’s division and Wofford’s Confederate brigade approaching on their right flank the last two Union Brigade (Day’s and Burbank Regulars) put up spirited fight but eventually withdraw leaving the Wheatfield in Confederate hands. Four hours of play and loads of bullets (dice) whizzing around the table made for a great day of gaming. As Cross moves his brigade out into the Georgian killing ground, Kelly’s ‘Irish Brigade’ (sorry I did not have the correct colours or figures for the Irish) moves up in direct support. As the battle intensifies Kershaw is reinforced by the 2nd & 15th South Carolina and his line stops the Union advance. 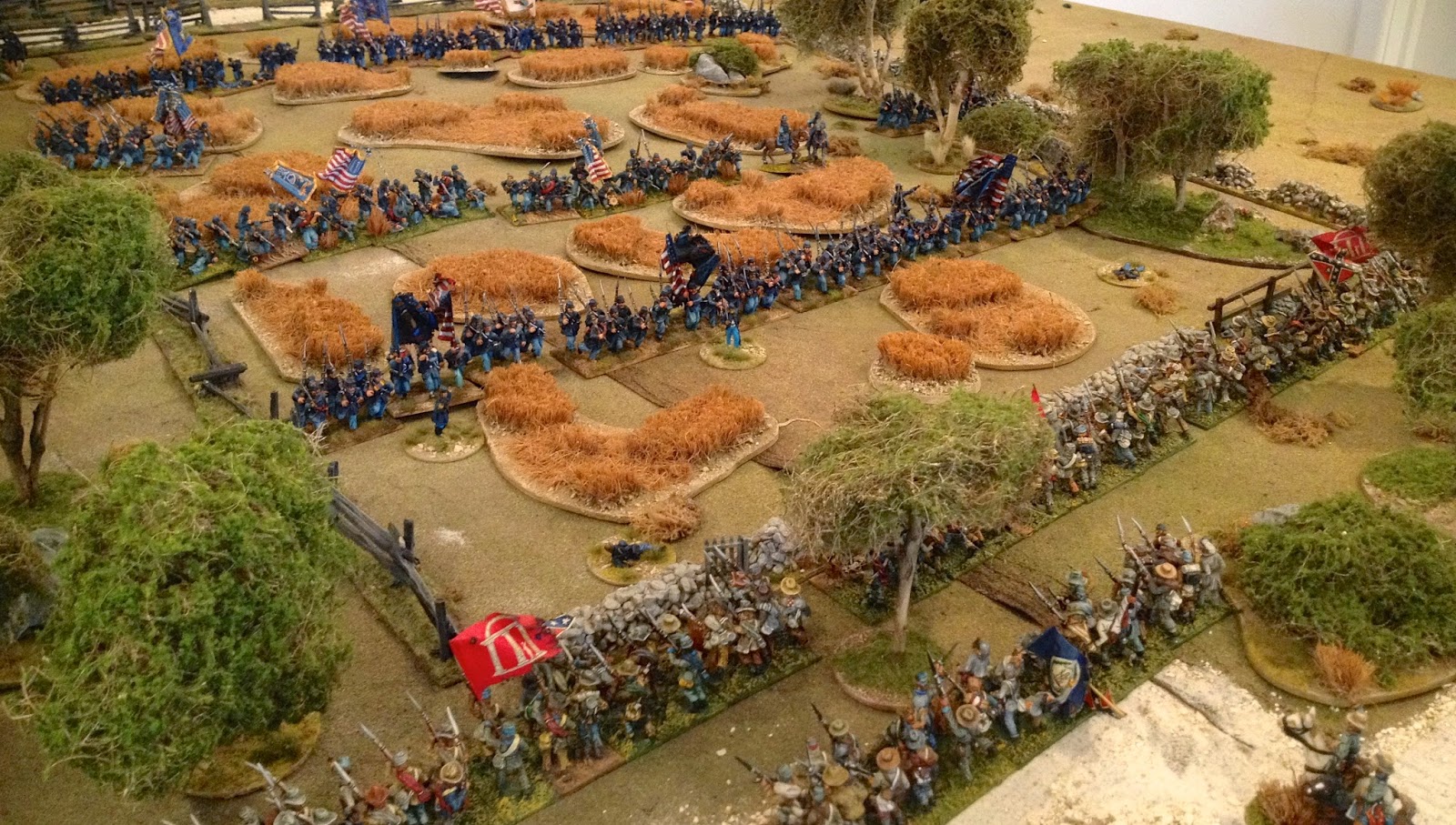 Above and the images below show the slow but awe inspiring advance of the Federal brigades across the Wheatfield. The Georgians however put down a withering fire into the massed blue ranks. 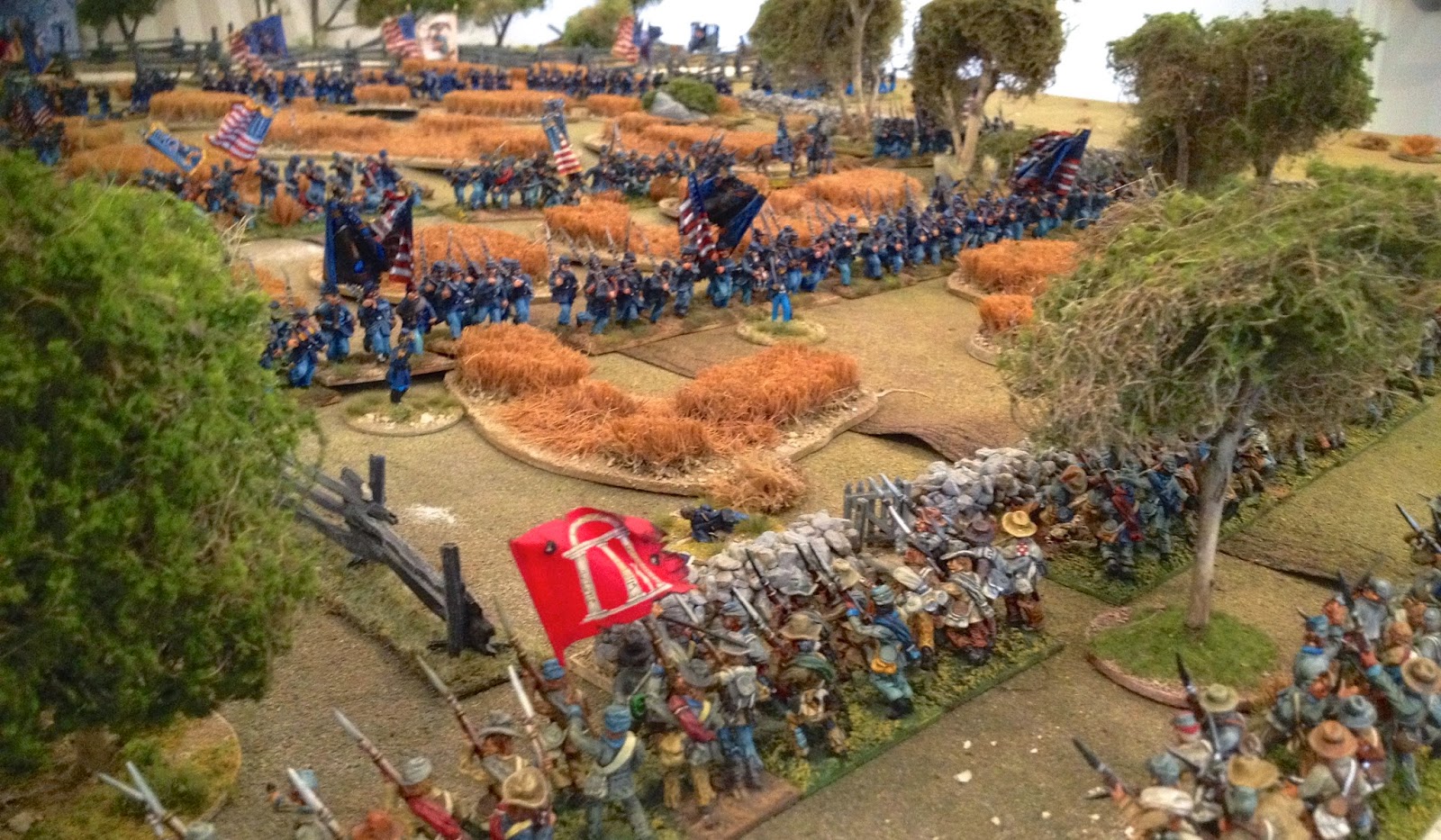 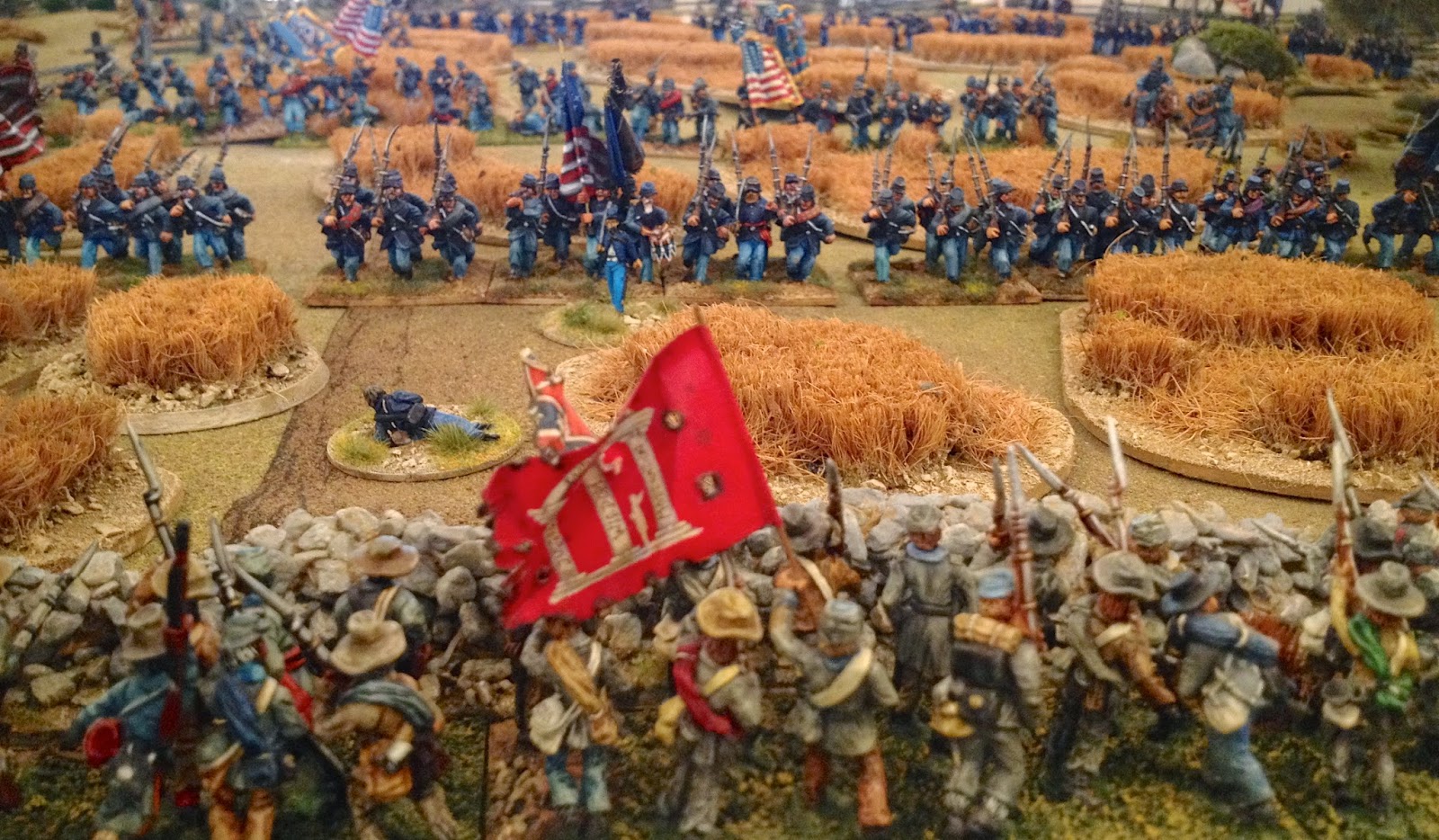 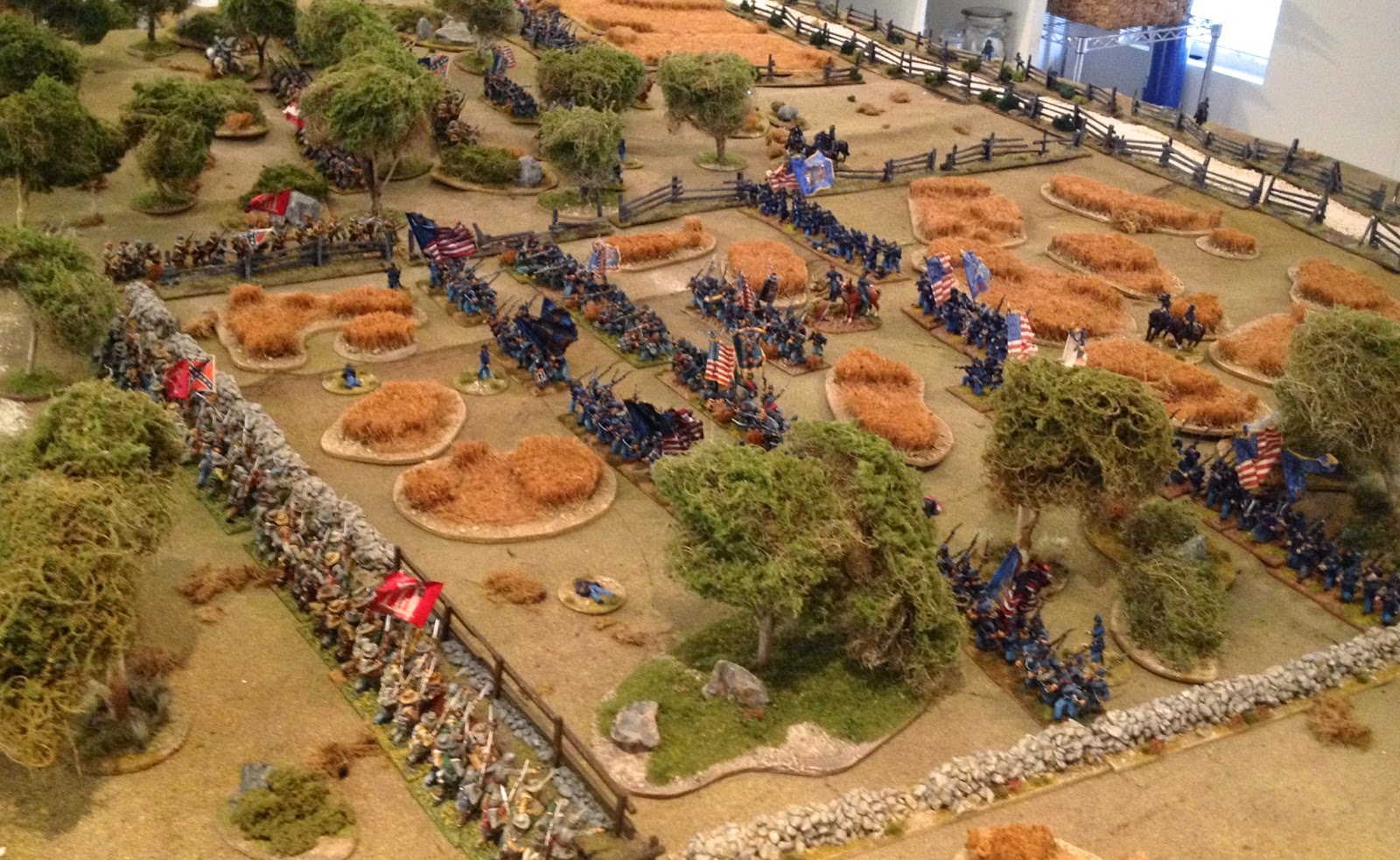 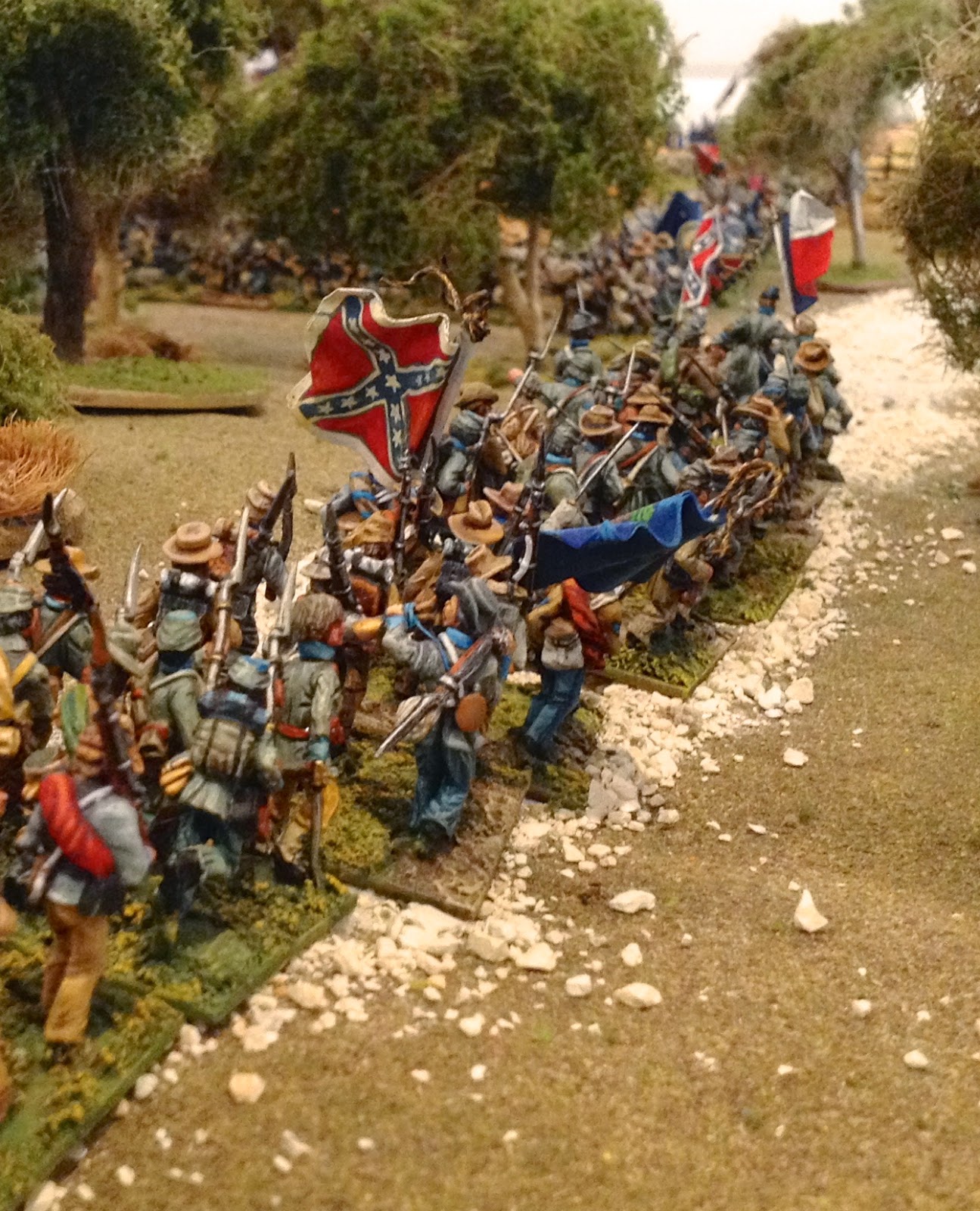 Three Union brigades now seen advancing across the Wheatfeild. Cross leading and taking heaving causalities in the front, followed by Kelly’s Irish and then finally Brooke’s Brigade in the third line. 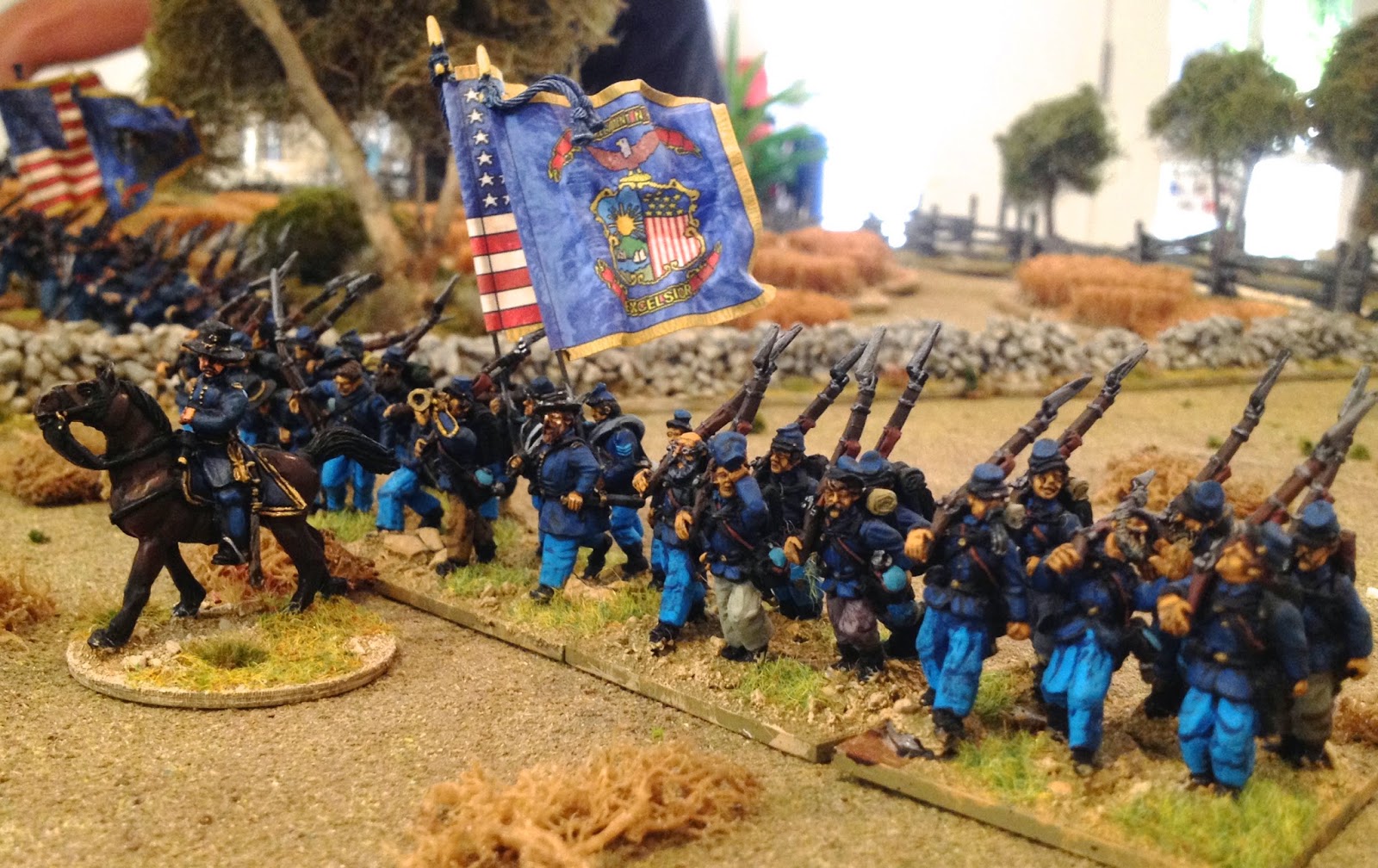 The 2nd Delaware of Brooke’s Brigade 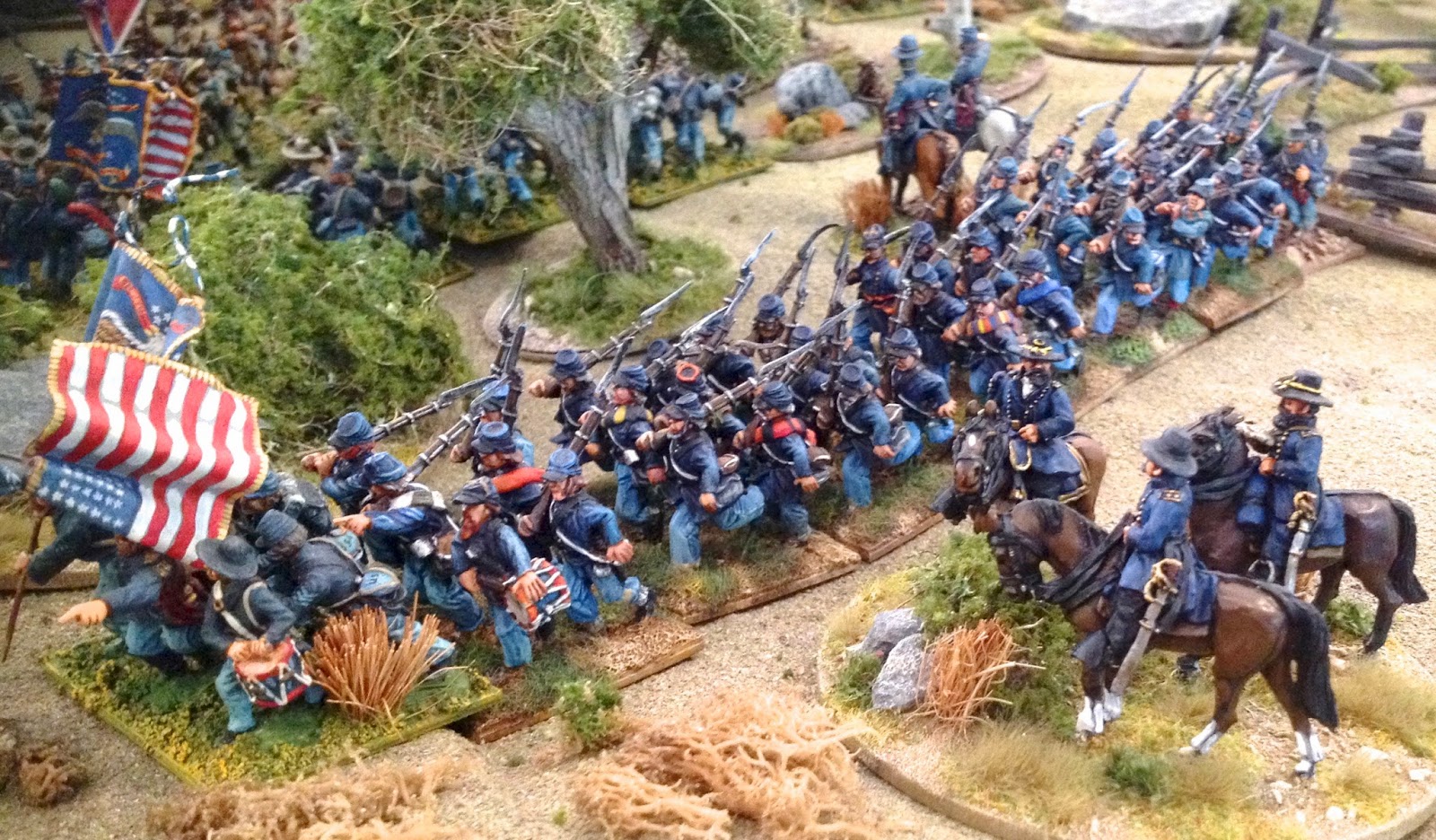 Pressure starts to be felt on the Union right flank and supporting artillery support withdraws in front of a rapid Confederate advance……the Peach Orchard has fallen and Wofford’s Georgian Brigade can been seen advancing on their flank. Caldwell thus directs Zook’s Brigade to fall back and take up a more defensible position in the Wheatfield. 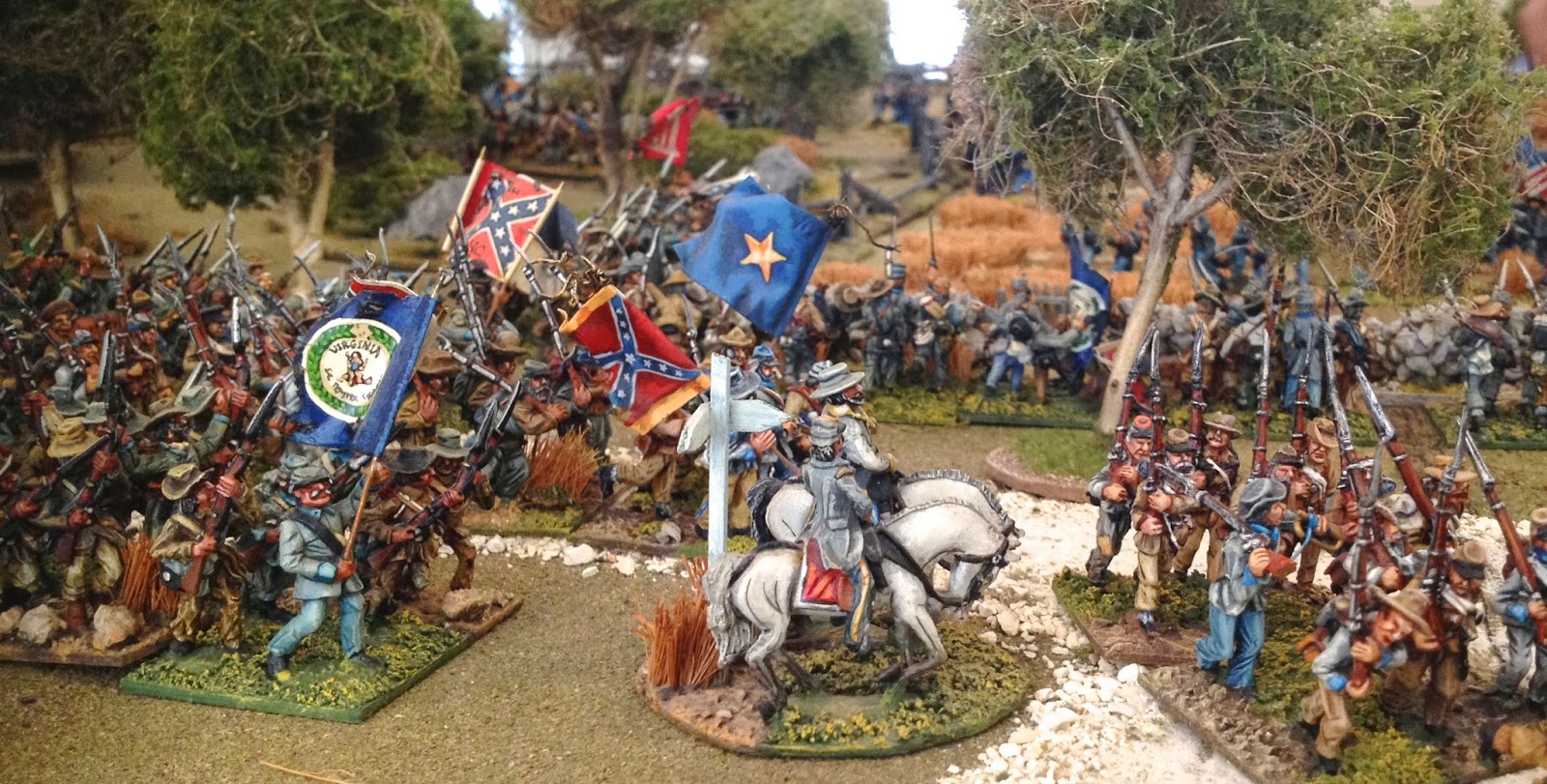 Semmes and his troops near the battlefield and start to deploy in support of Anderson’s boys.

Murderous rifle fire has withered down Cross’s Brigade and it is forced from the battlefield. Next in the firing line comes the Irish Brigade. Fighting hard they too succumb to the heavy Georgian fire..but they push on. 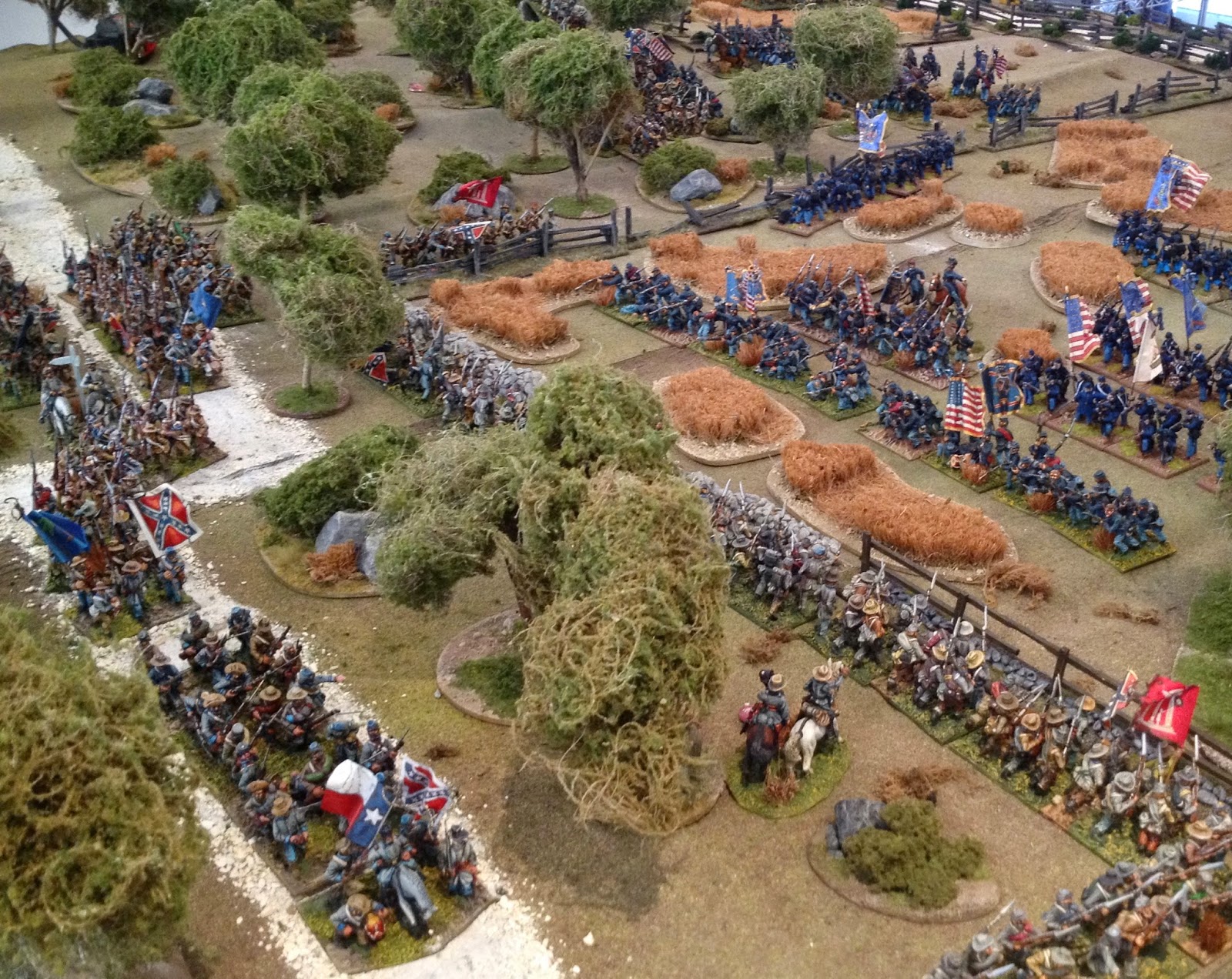 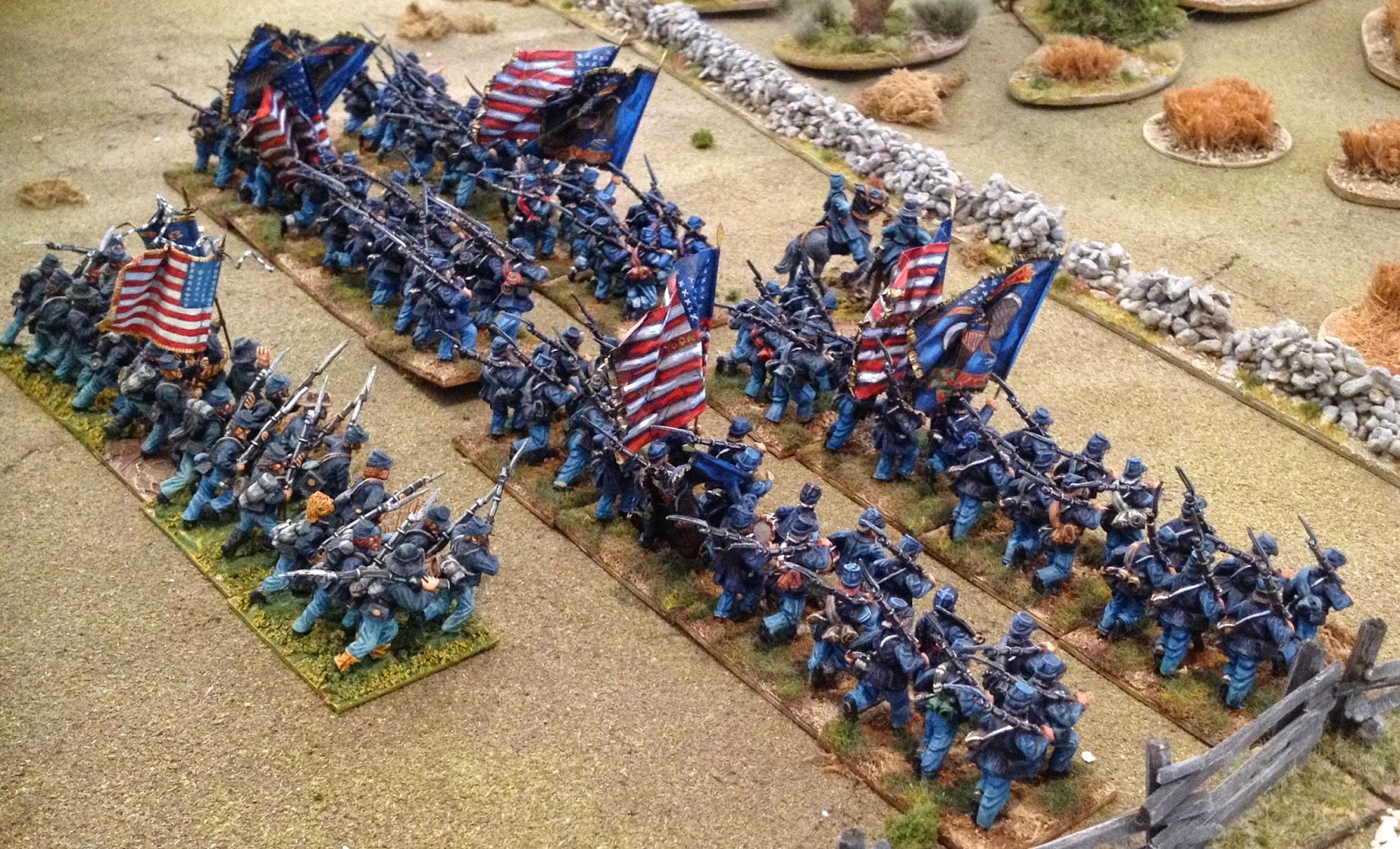 The last of the Federal reserve arrives (above and below) – A brigade of US Regulars under the command of Col Hannibal Day. They advance westwards in hope of stopping the collapse of the Union right flank 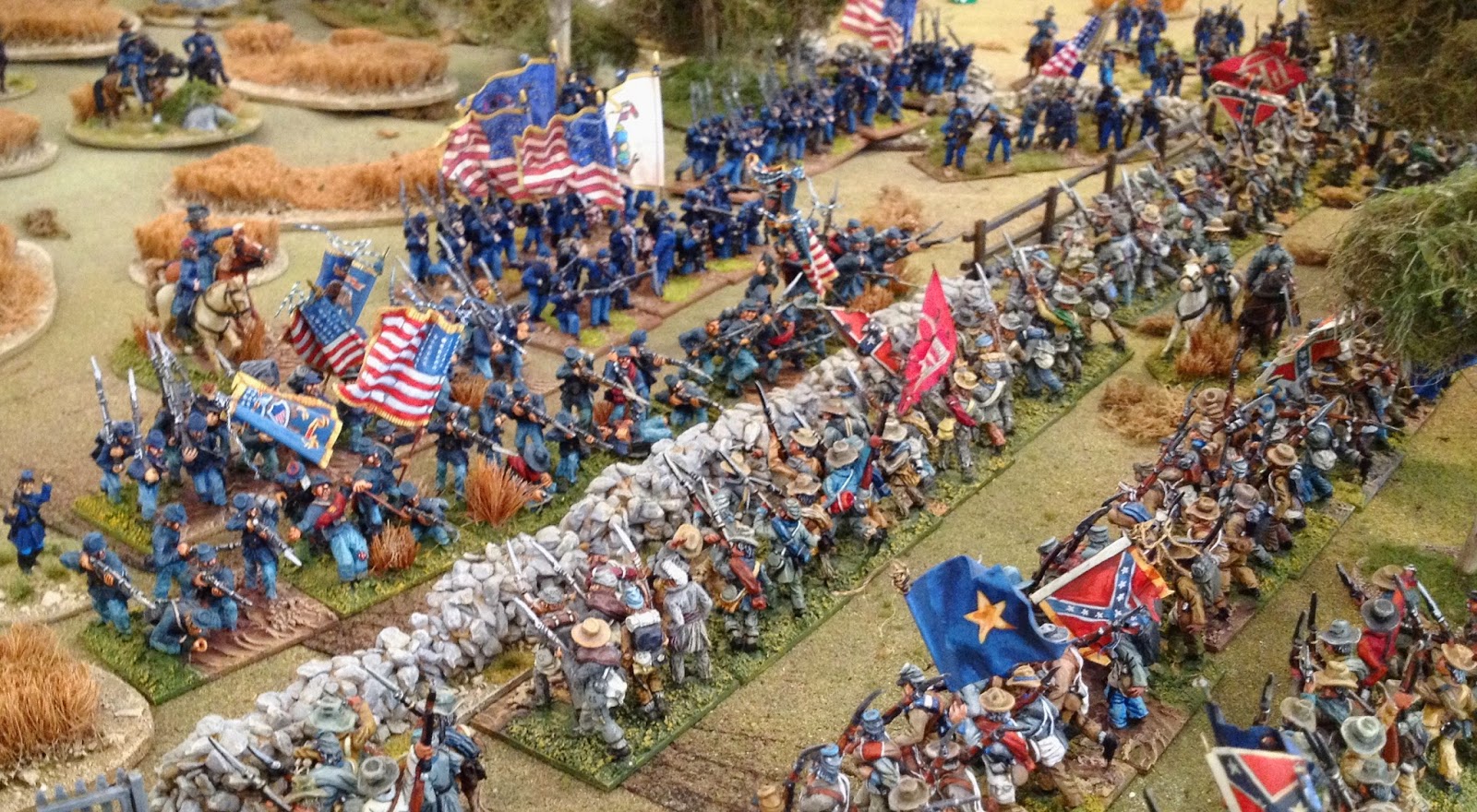 But Day’s regulars advance rapidly in support of their volunteer comrades. 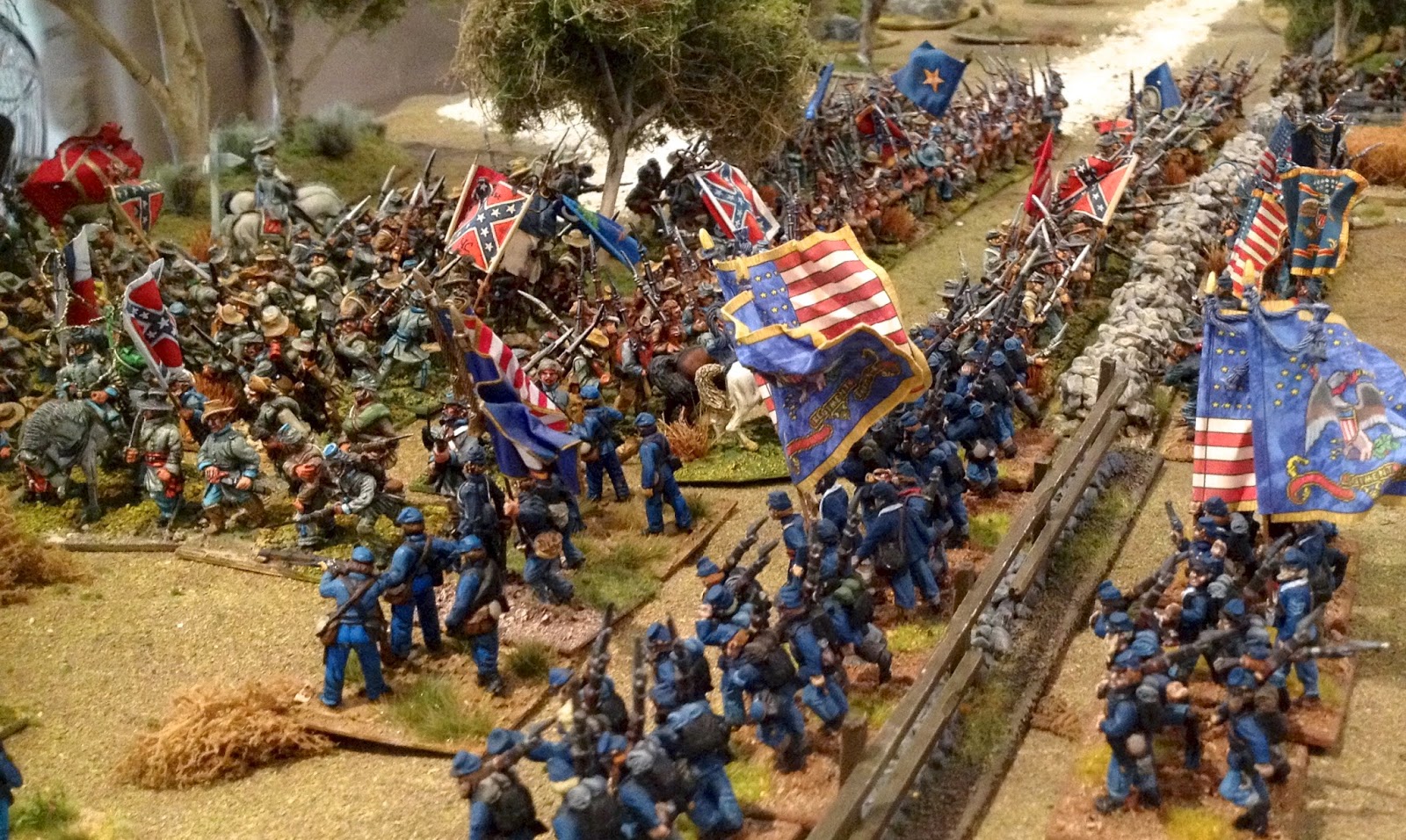 Above and below – finally the Union troops are successful in pushing the Confederates away from the southern end of the Wheatfield. Burbank’s US Regulars the 17th & 11th US were the first over the fence, closely followed by Brooke’s regiments.

However over the last two turns of our game Caldwell’s Division receives of 65% causalities and after a Division moral is rolled the fail and withdraw from the field of play. This left only the US Regulars holding the crumbling Union right flank. They hold for one more turn but are slowly pushed back and the game is won…another local Confederate victory. 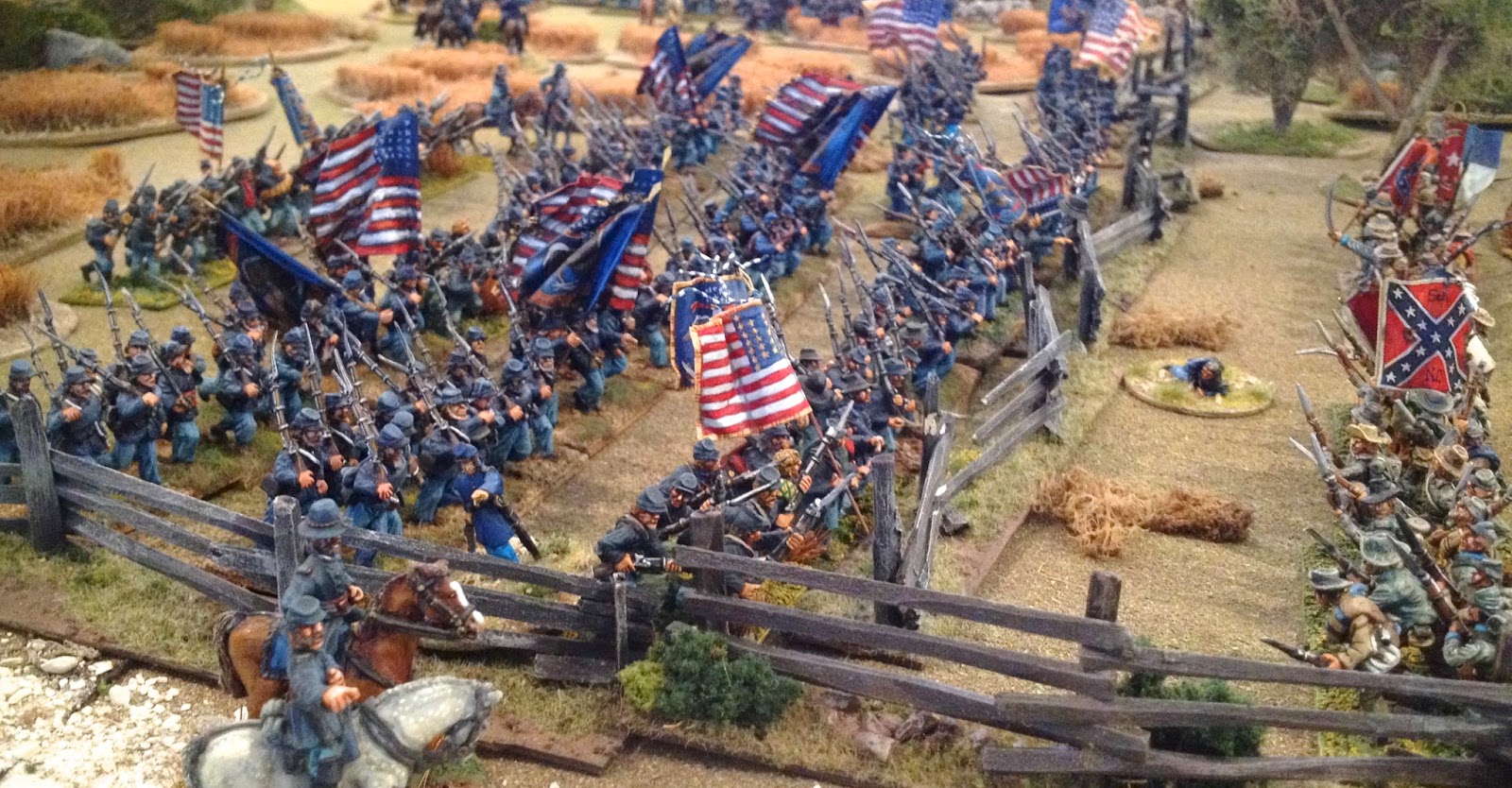 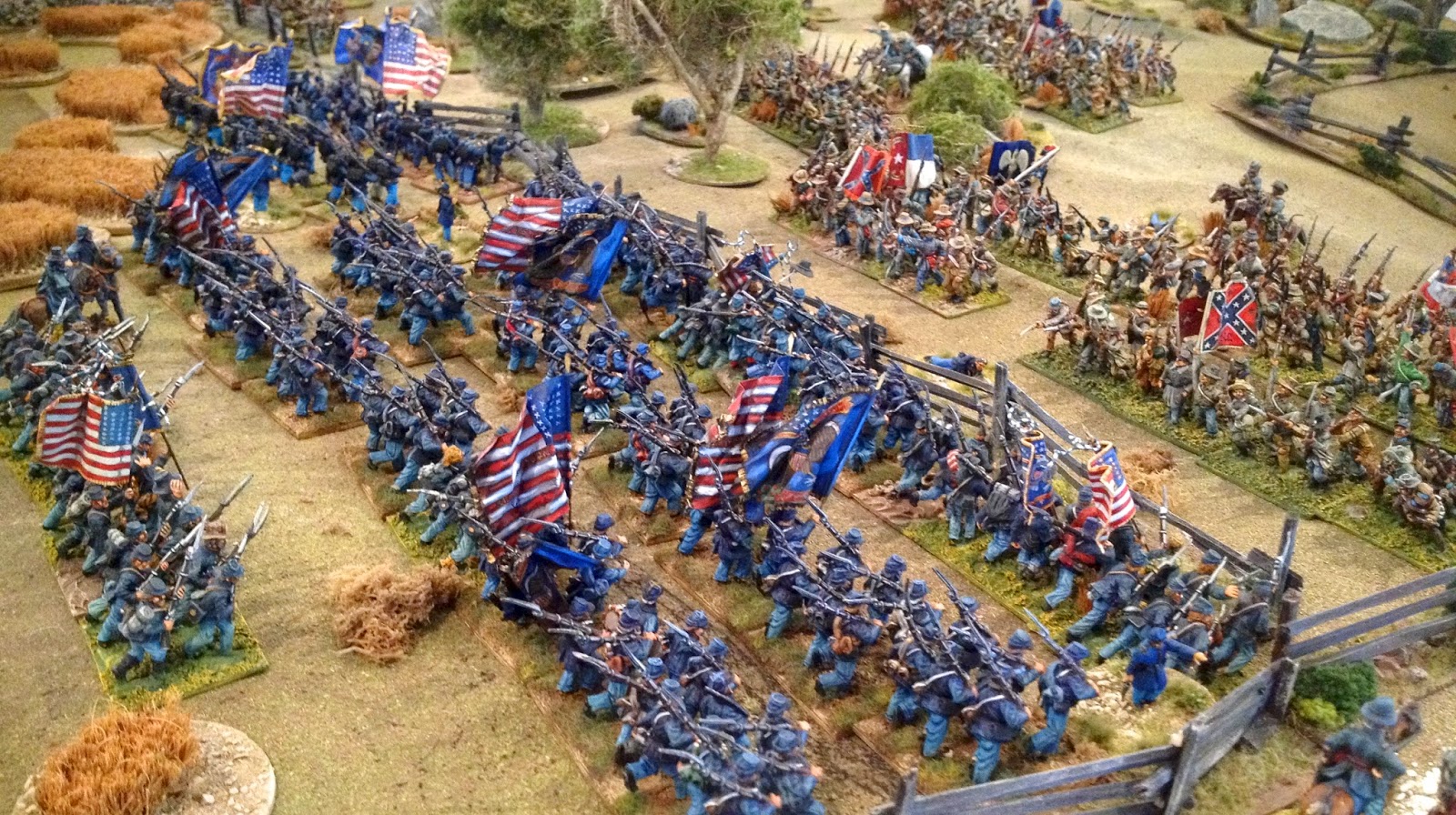 The last great defence by the Federal line on the western flank of the Wheatfield. They Regulars and what remains of Zook’s Brigade but are eventually forced back by Wofford’s veterans. 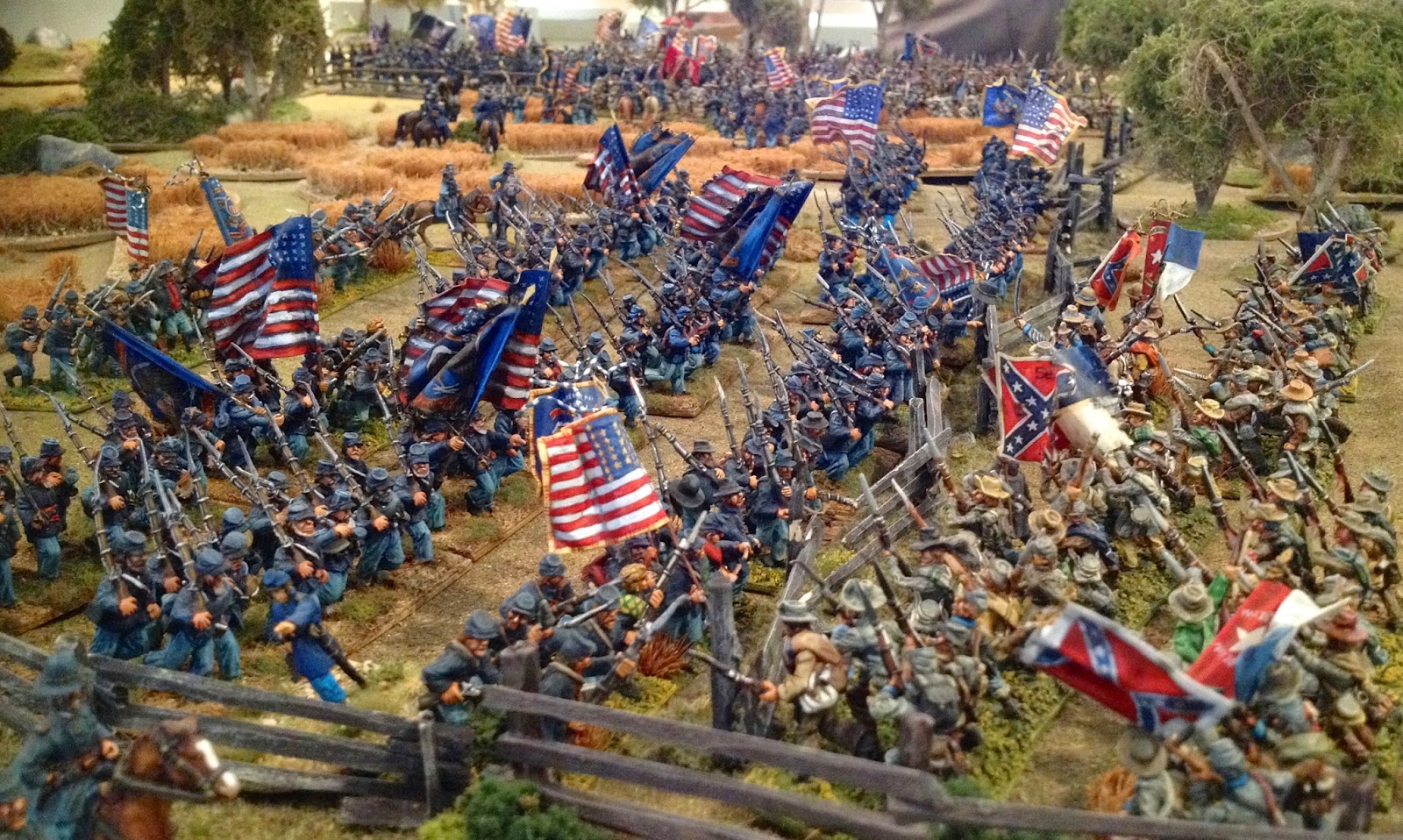 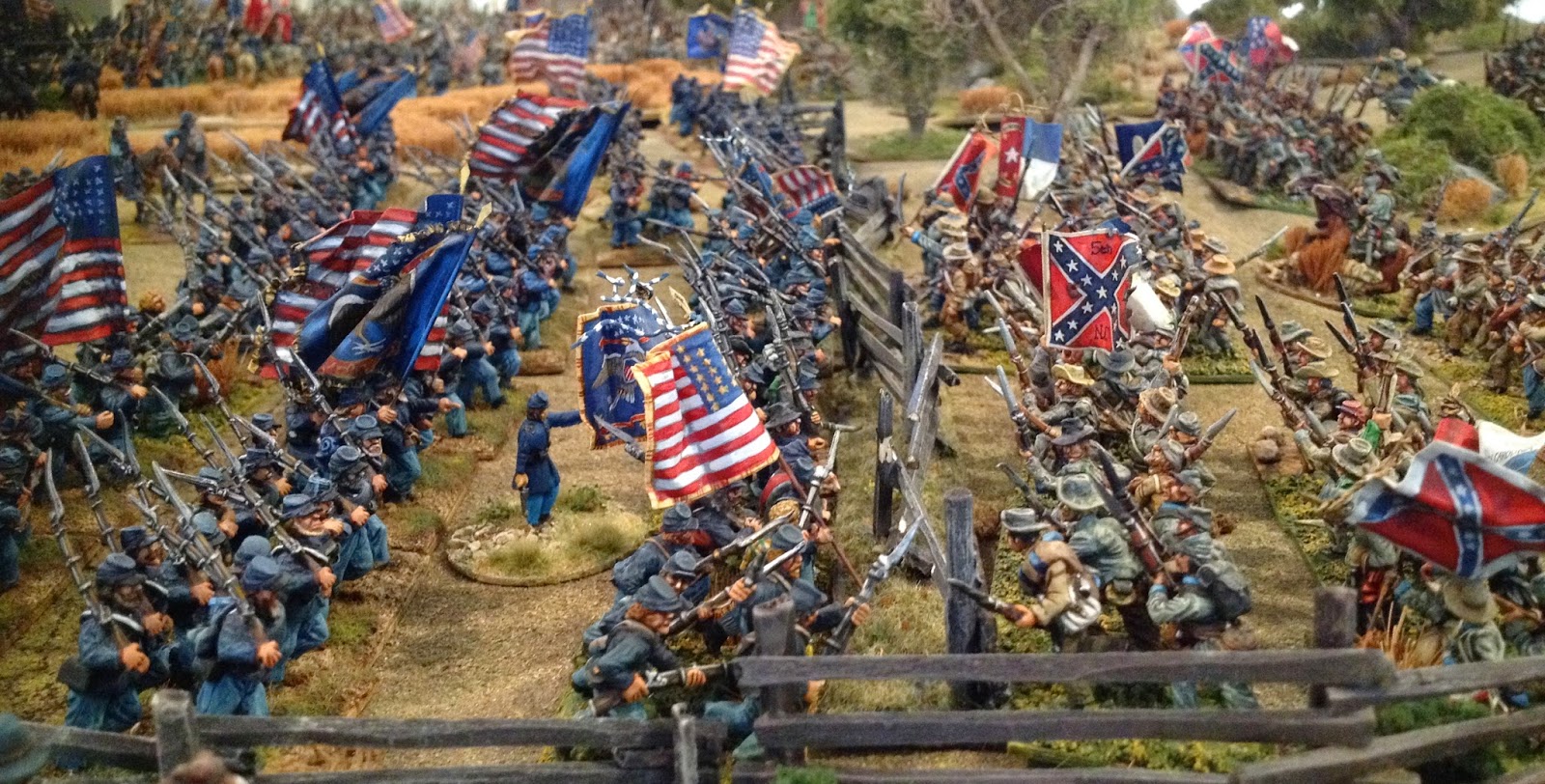