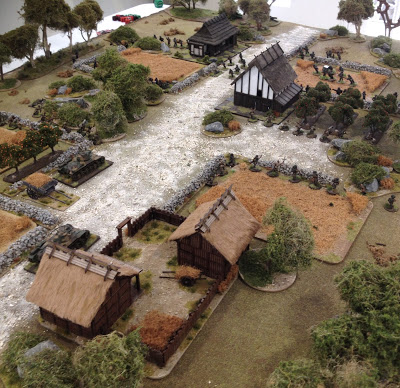 Just a few images from our little Russo-Japanese game Dave Lowe and Terry Moran played at the club today. Both armies had never been on the table before so this was there first outing and it was bloody. The Russian troops overwhelmed the Japanese infantry but were finally halted by the two Japanese medium tanks..well at least for a short while. Eventually one was knocked out and the other withdrew. Good game and something different. 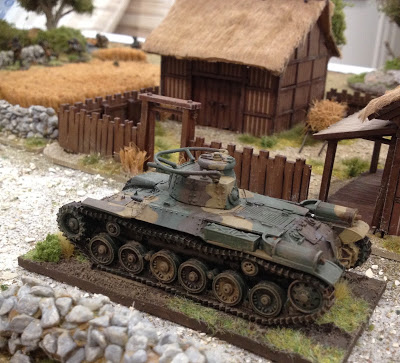 After seeing many posts and images of games on either the Western or Easter fronts I thought it would be a good idea to play a completely different theatre war, so we moved our game to the Russo-Japanese front and to 1945, where Russian invaded the Kuril Islands in a last minute land grab before peace was declared. It also got us out of  the jungle where the majority of games against the Japanese seem to be played. 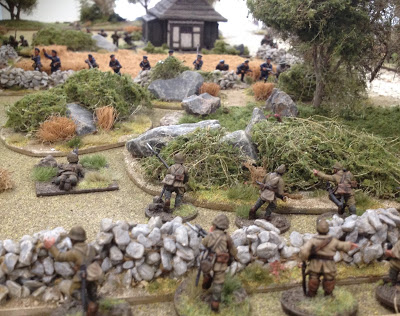 We did not work on a point system for this game and just basically placed what troops we had on the table. The Japanese fielded three small squads, PHQ, a sniper team, light mortar and two Type 97 Chi Ha tanks. The Russian forces were however greater in numbers, but I did not allow them to have any armour. They fielded four large squads of infantry, one squad of veteran Naval troops, PHQ, one HMG and a medium mortar. 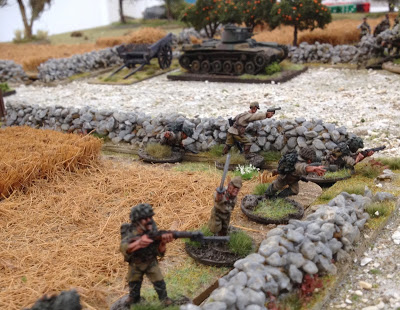 Just the small arms firepower of the Russian was able to suppress and then destroy the small Japanese squads with relative ease…however there was one Banzai charge, which put the wind up the Russian player but alas after three rounds of drawn combat the Japanese veteran squad died to the last man. 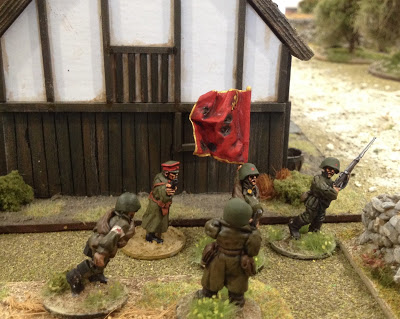 So in the end all that was left of the Japanese troops was the light mortar team, PHQ and the two tanks. The two tanks however  catch two Russian squads in the open and before one tank was destroyed, managed to destroy both Russian squads…a little pay back for the Japs. 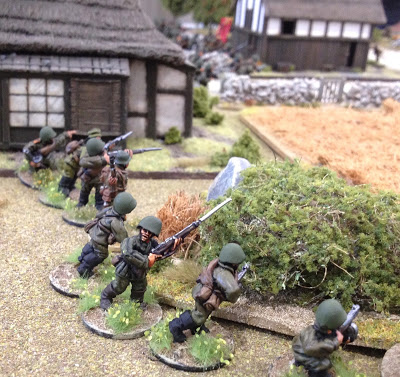 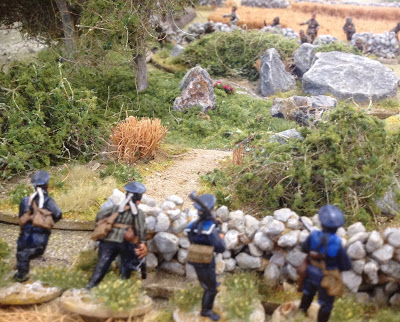 Tough Russian veteran sailors suppress the Japanese while other Russian troops move up to support. 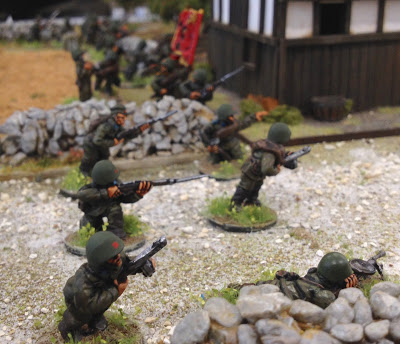 Most of our battlefield was open rice fields and a few farmers cottages. 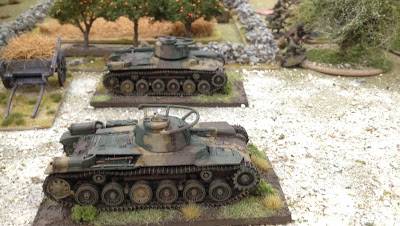 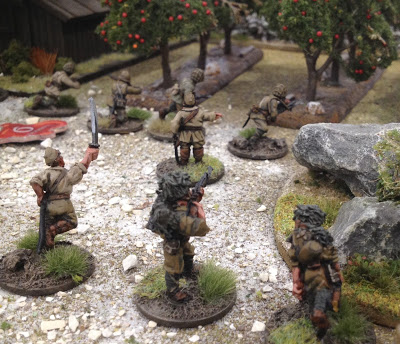 The Japanese Veteran squad digs in and stubbornly holds ground. 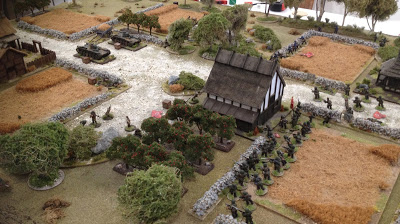 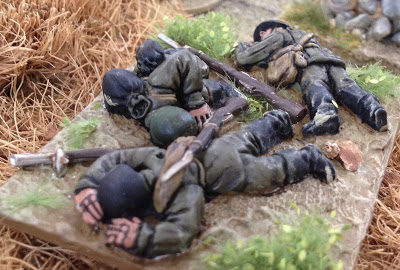 Russian casualties were many The Japanese PHQ seeks cover behind a stone wall. 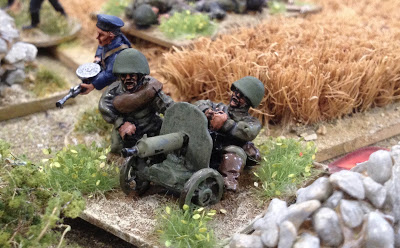 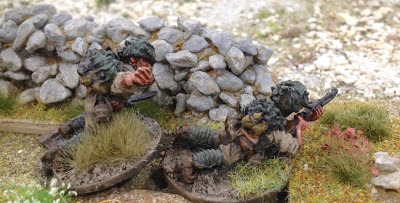 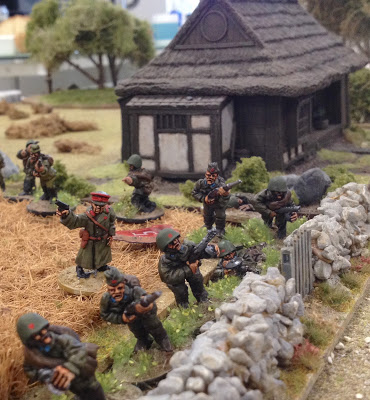 The Russian Political Commissar fires his pistol over the heads of the troops in order to encourage then to keep going forward. Both side fight well in hand to hand combat but the overwhelming numbers of Russians finally tell and the veteran Japanese died to the last man. 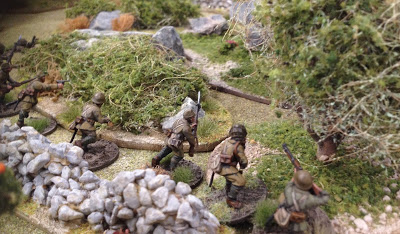 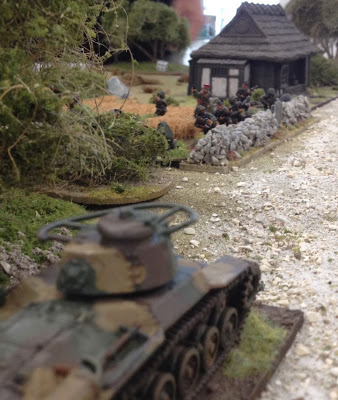 One of the type 97’s slowly moves forward and engages the Russian HMG and supporting troops. 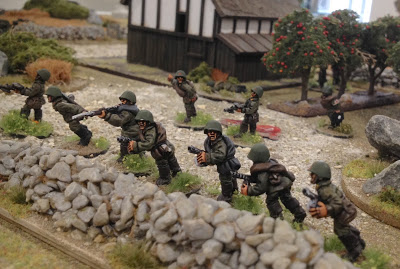 Russian troops breakthrough the Japanese left flank and into the open ground…only to be destroyed by the Japanese tanks. 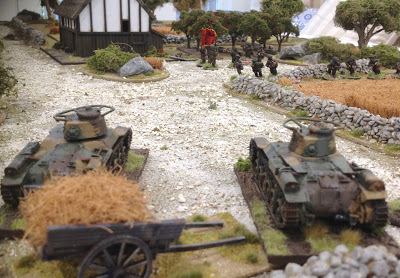