Yesterday Myself, Brian Buskell and Dave Lowe decided to do something a little different for our ACW gaming, instead of the normal set piece battles I decided to try our luck in running a game where a Confederate Cavalry Division of three brigades (ten regiments) and two batteries of artillery conduct a raid into Maryland with the mission of destroying two sections of railway lines.

The Union players mission was two fold, one was to try and stop the raid and destruction of the railway line and two was to kill or capture as many of the pesky ‘Reds’ as possible…..hmmm easy you say? Not really as I though in a few little funnies for the Union player which added a good deal of the ‘fog of war’ into the game. So first after all other movement was conducted on the table, the Union player rolled a six sided dice and halved the result, which meant a roll of six or five gave the Union player three new regiments to bring onto the table. However there was more to come, he then have to roll to see what type of unit it was… a roll of 1 meant artillery, 2/3/4/5 meant infantry and 6 was cavalry. Quality of the unit was then rolled for…1/2/3 meant green/militia, 4/5 meant line/regular and 6 was veteran or elite. Then finally after all the rolls he had to roll to see from which point on the table each unit was to enter, I had four entry points, which were entered on a roll of 1/2/3/4 for each pint and then a 5/6 meant he could choose the location in order to mass troops or units. 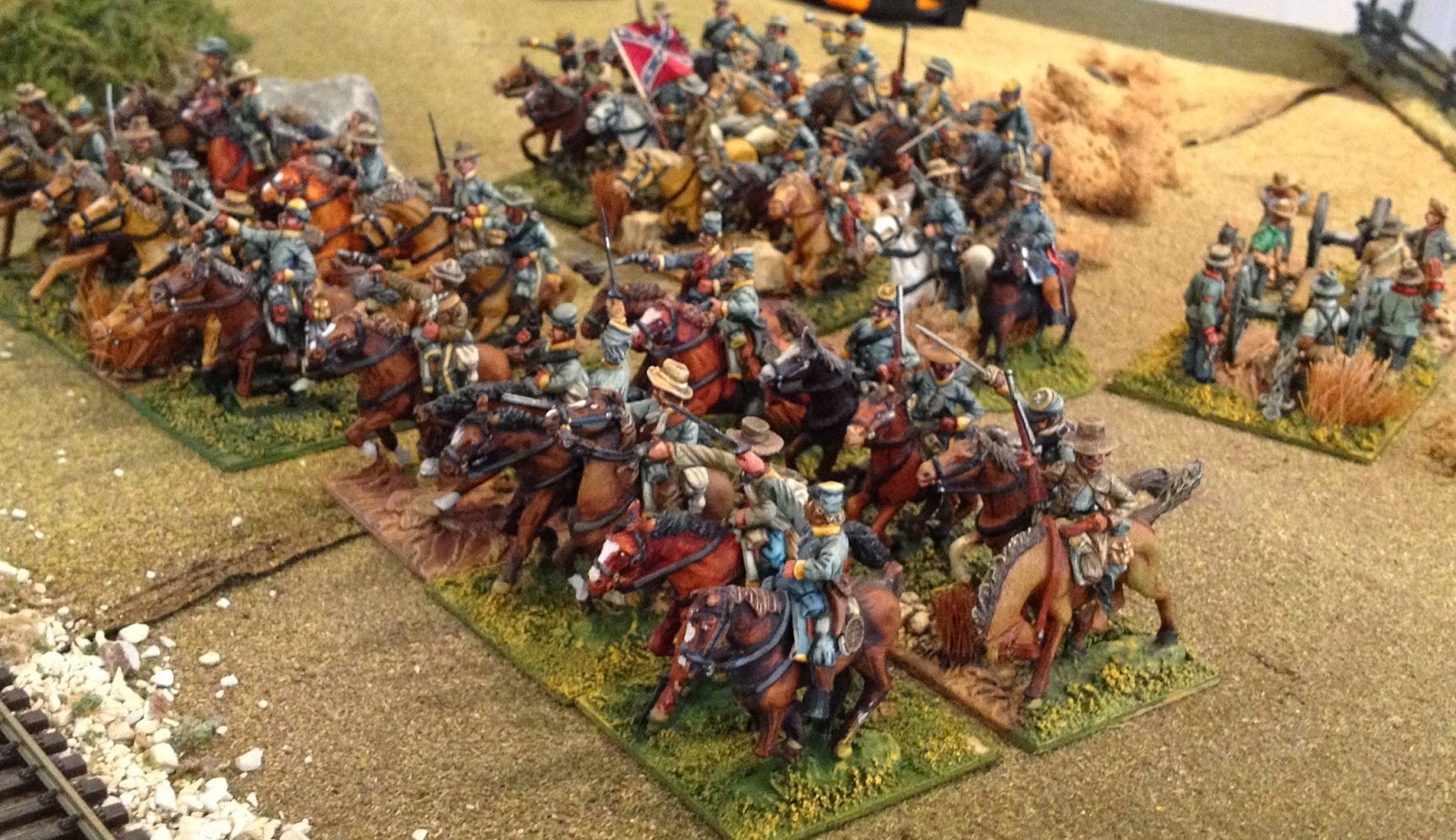 So there was a little messing around with the dice however it worked out well and kept the Confederate on his toes and a little nervous on each roll. For the Confederate player in regards to the destruction of the rail line, he had to dismount one of his regiments and task them to destroy the rail. This meant that with the making of fires, lifting of the tracks, the heating of the track and finally bending the track beyond use would take that unit five turns carry out the task. Each other unit from the brigade had to hold back the ever increasing numbers of Federal troops.

Eventually after eight turns Brian (the Confederate player) managed to destroy two sections of the railway track and completed his mission. However Dave (the Union player) did manage to inflict some rather high casualties on some of Brian’s units which include the capture of a horse battery and a complete regiment of  Confederate troopers on the last turn..but still the track was destroyed and it would take a number of days to repair…so a Confederate victory.

One of two Union cavalry regiments who were the first to the scene. This particular regiment came on as veterans and would eventually capture a rebel artillery battery and defeat a veteran Confederate cavalry regiment…not bad lads not bad at all. 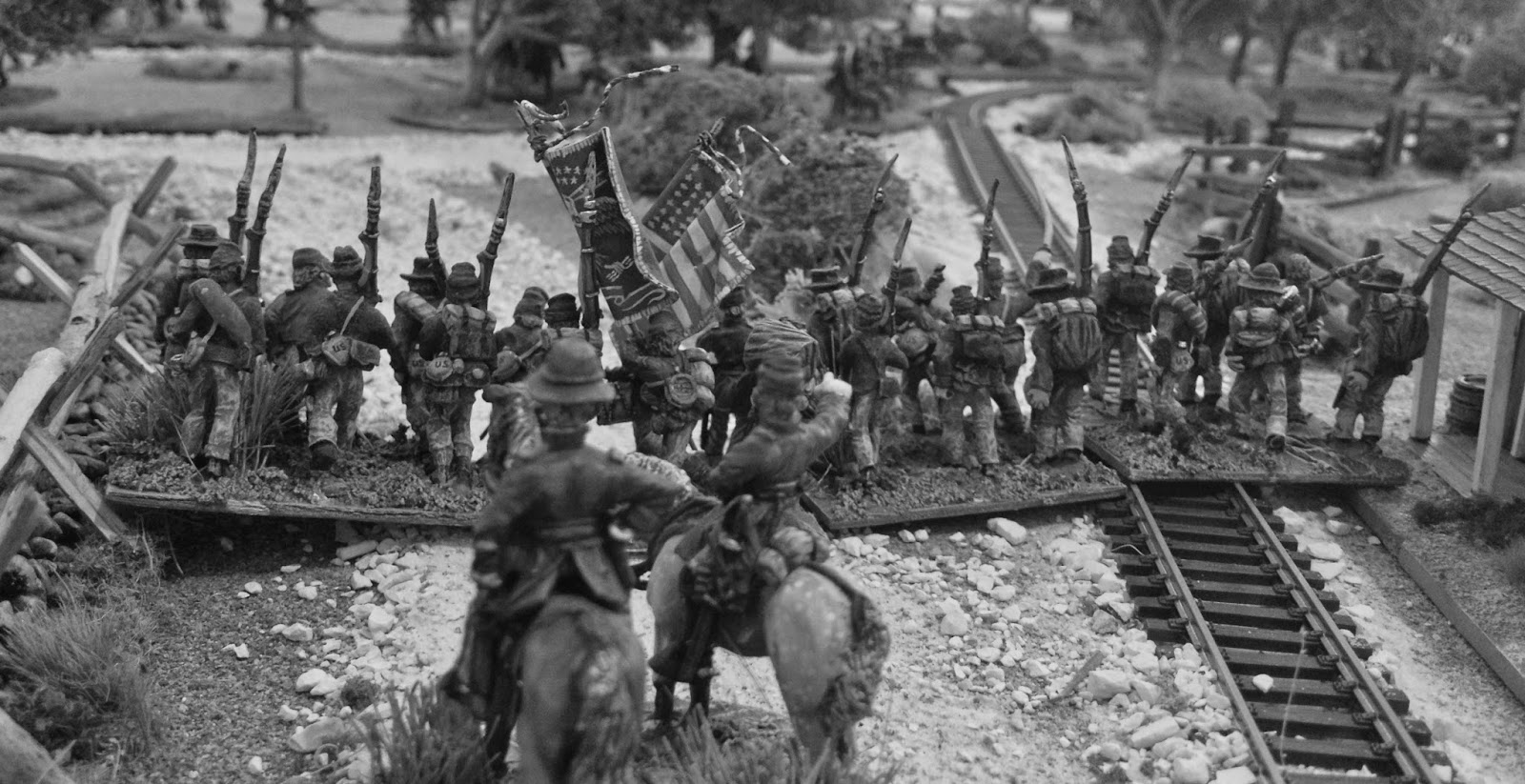 The only Federal unit allowed on the table during the first turn was a local militia unit which was only called together just a few hours before when the alarm was raised that there were raiders in the area. The boys took a few casualties from rebel artillery and small arms but preformed their duty well throughout the game. 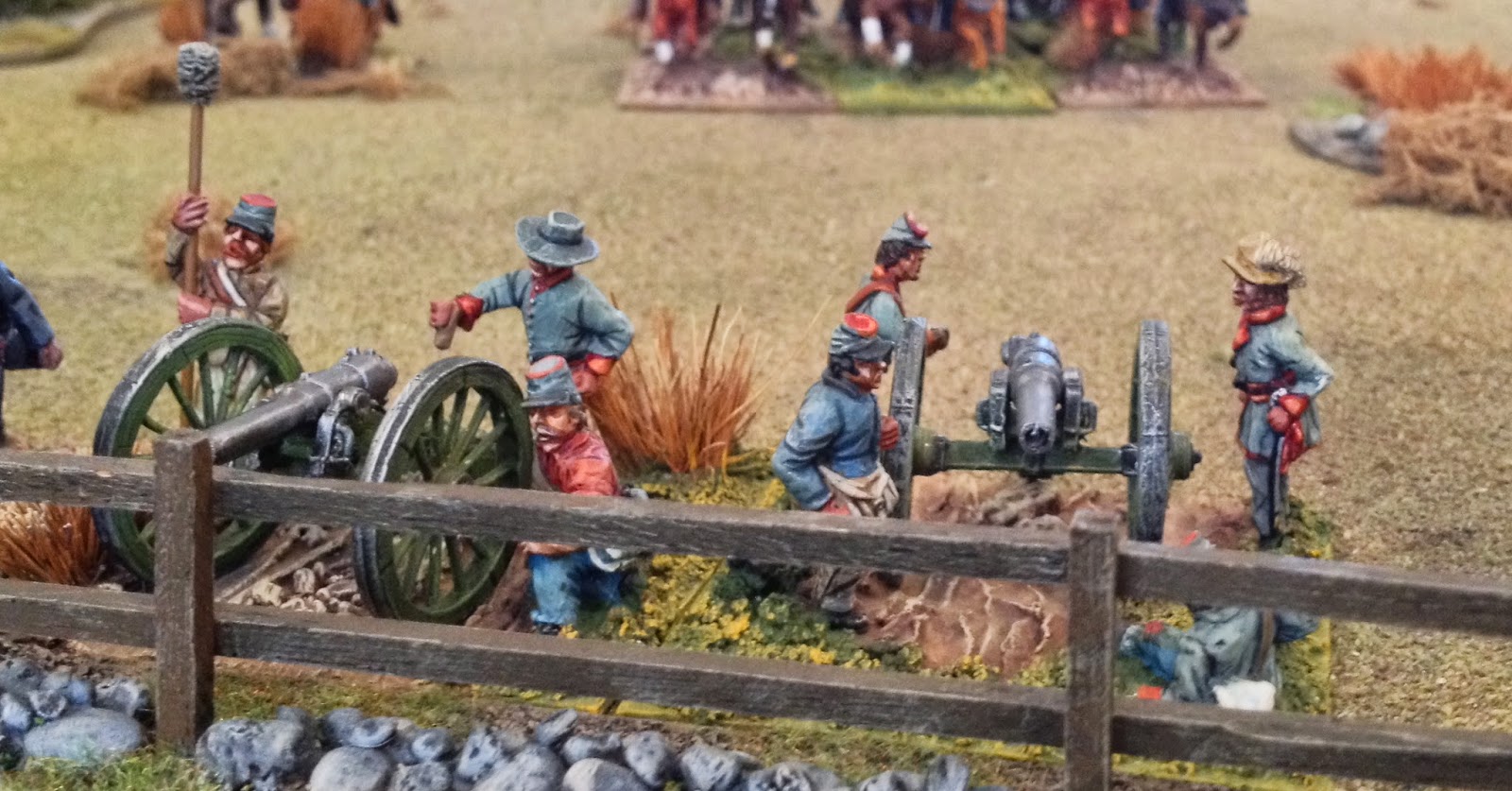 A Confederate horse battery unlimbers on and sends a few rounds into oncoming Federal re-enforcements. 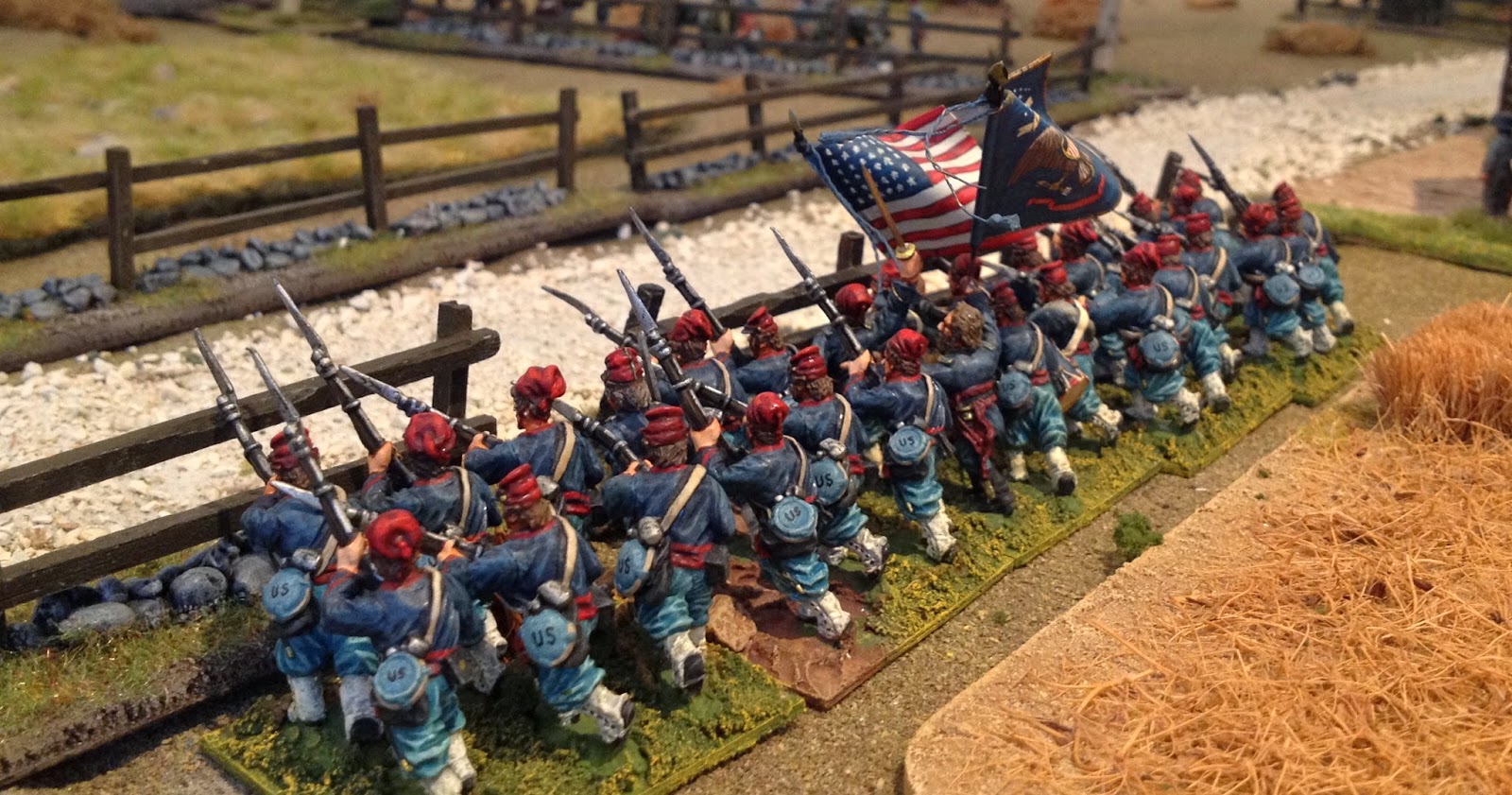 One of two veteran Union regiments to enter the field of battle (I made the veteran units Zouaves so that they were easy to recognised on the table from the numerous other units). However these lads really did not see much action but their presence did I feel force the Confederates to chance the dispositions and withdrawal routes. 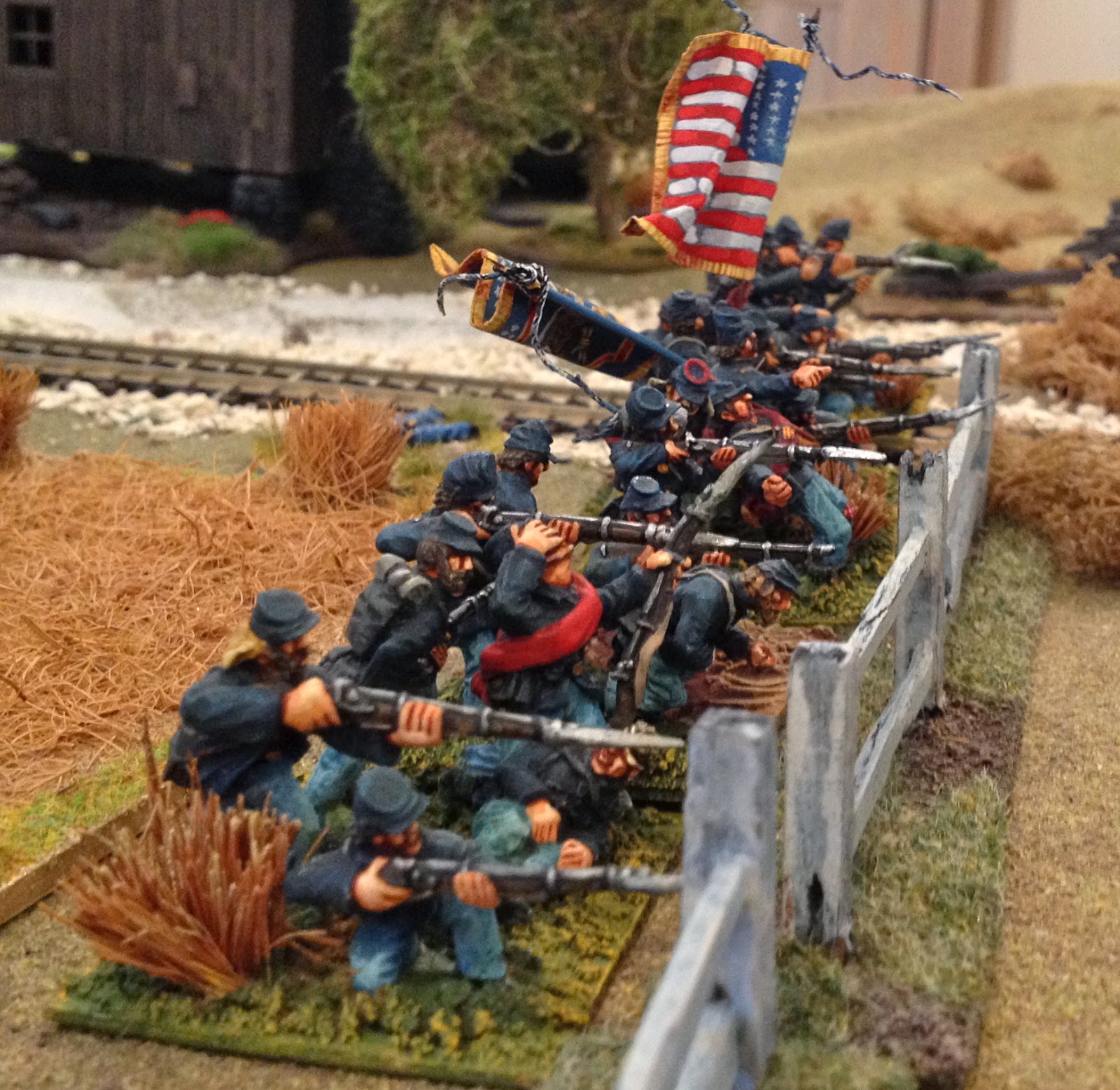 The town militia take up positions behind a rail fence and fire a few volleys across at the rebel dismounted cavalry. 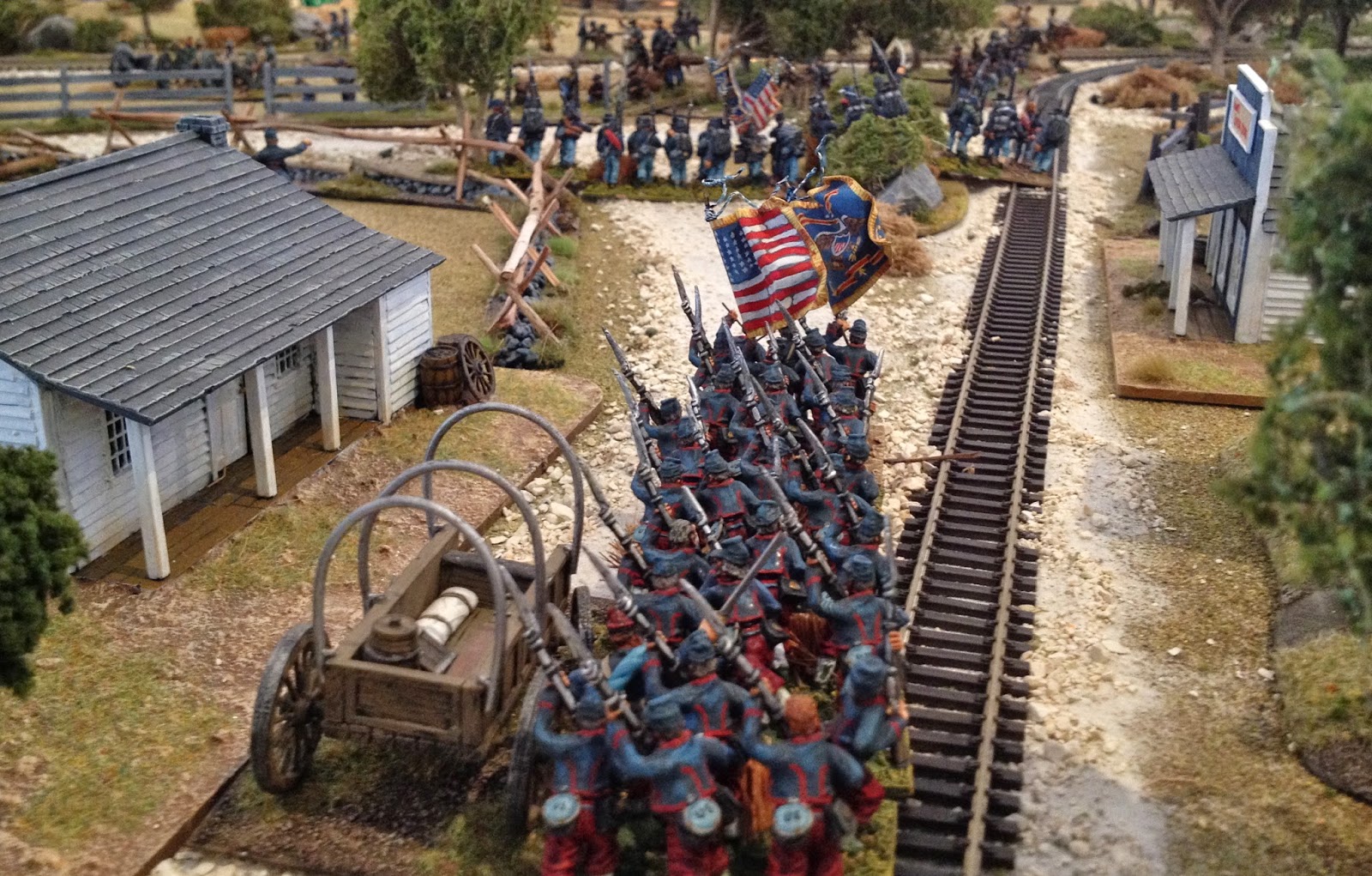 The other veteran Union regiment enters the board in support of a line unit just to their front. 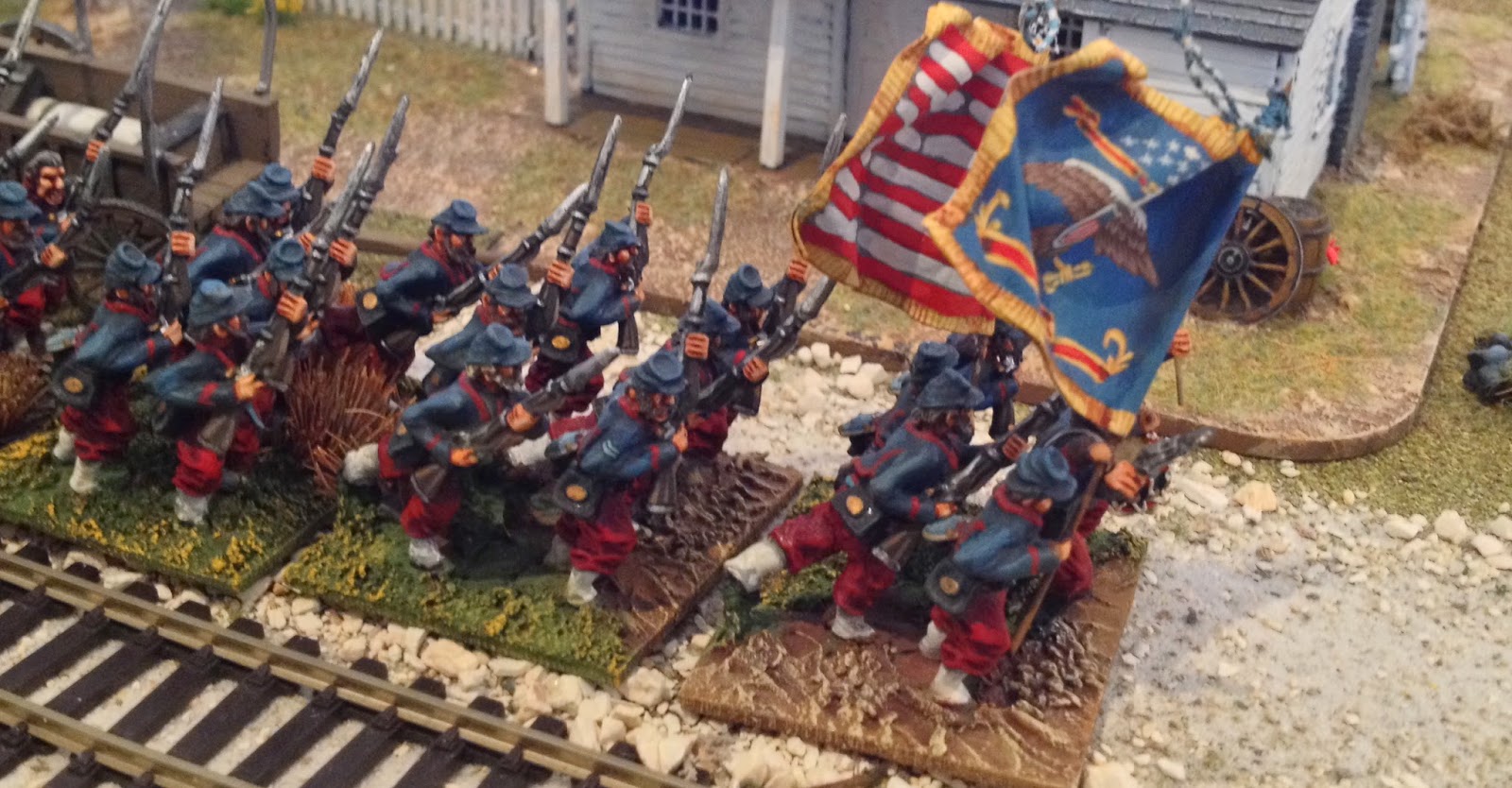 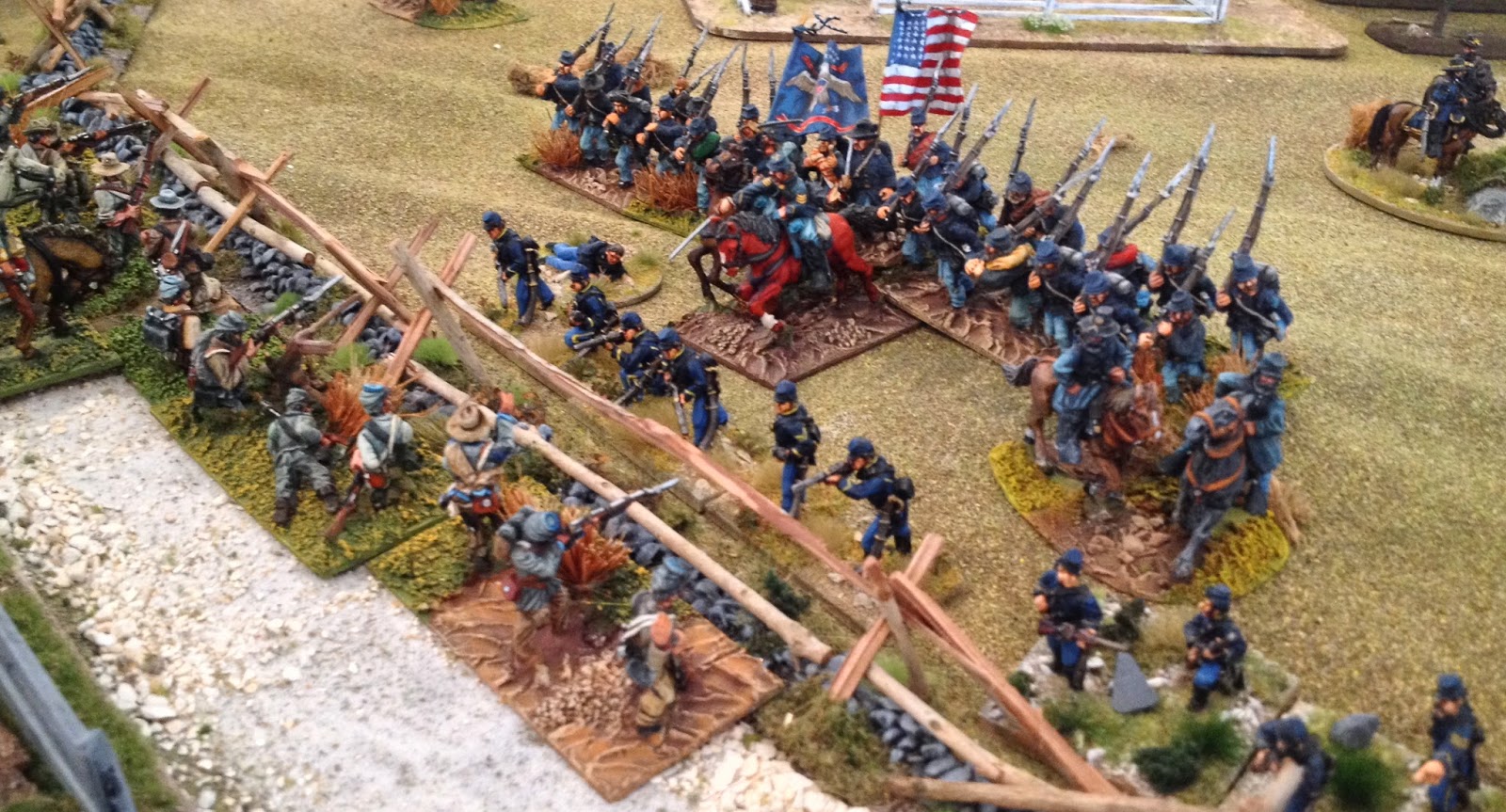 The rebels try a desperate charge into opposing Federal dismounted calvary. The charge was successful however they were soon counter charged by the arrival of three Federal infantry regiments. 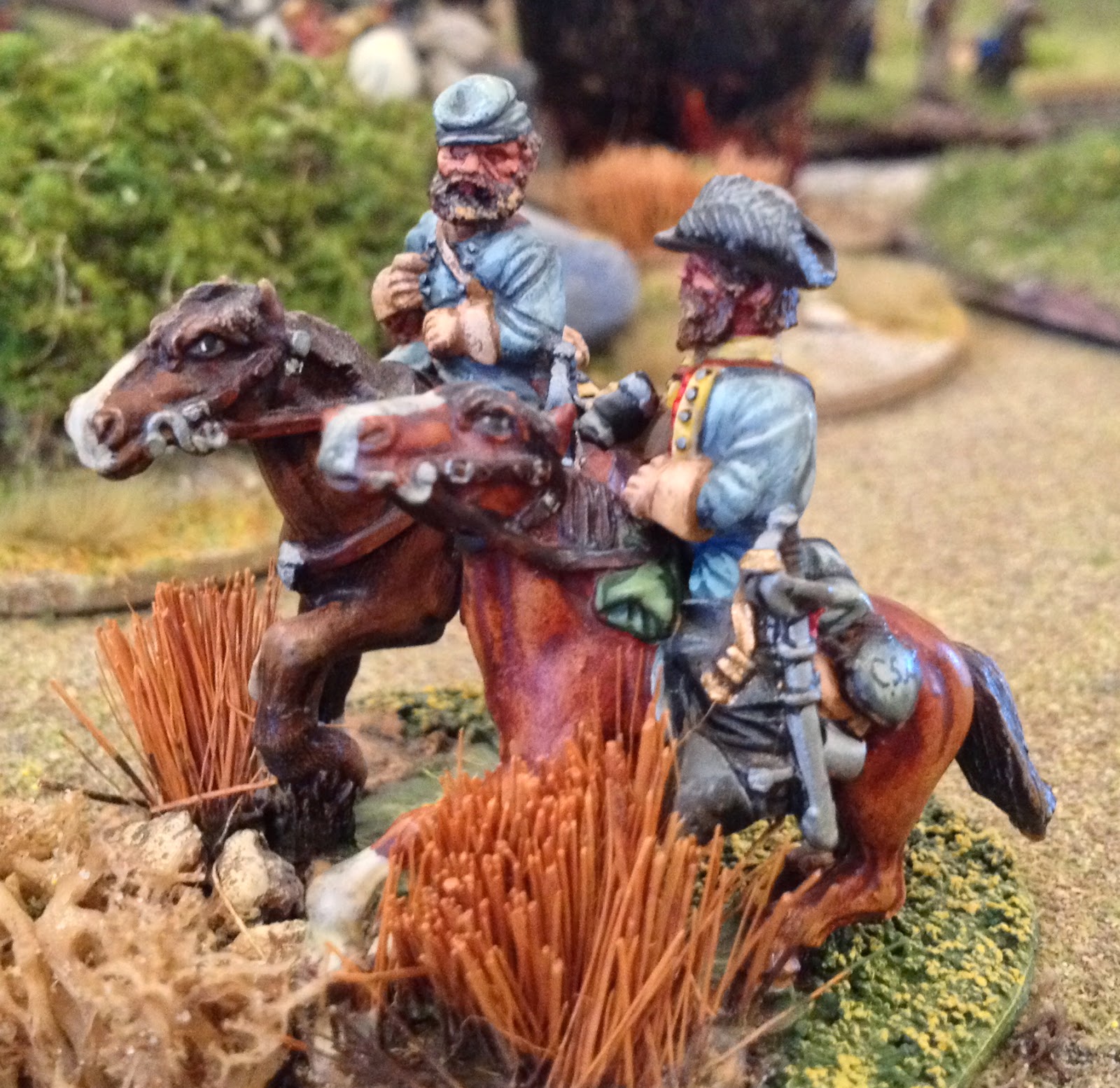 One of the Confederate Cavalry Brigade commanders re-thinks the situation and suggests to the divisional commander that with the arrival of more Federal infantry it might be time to withdraw? 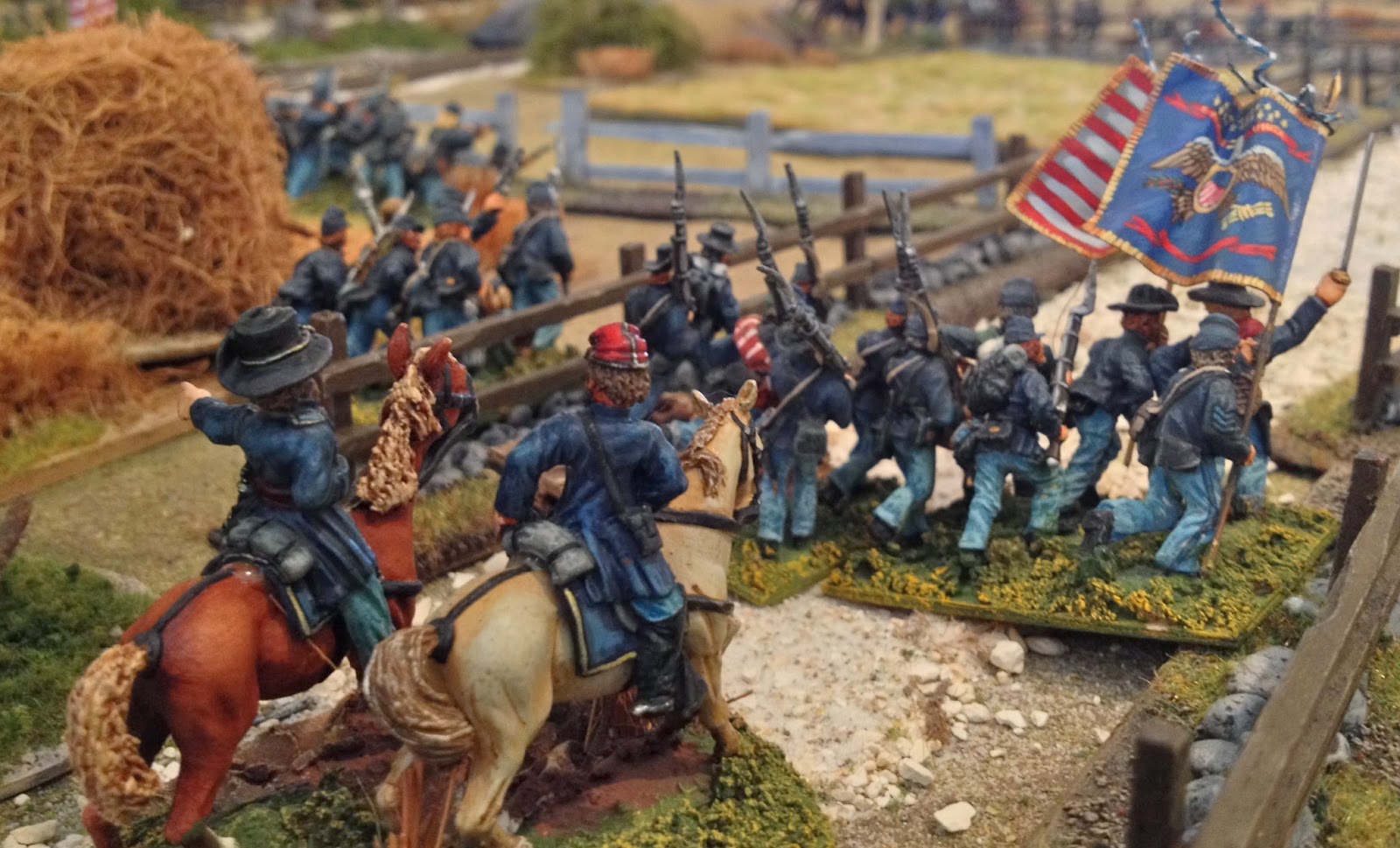 With pressure mounting on every turn and more Union troops closing in, time was running out for the rebels to complete their mission. 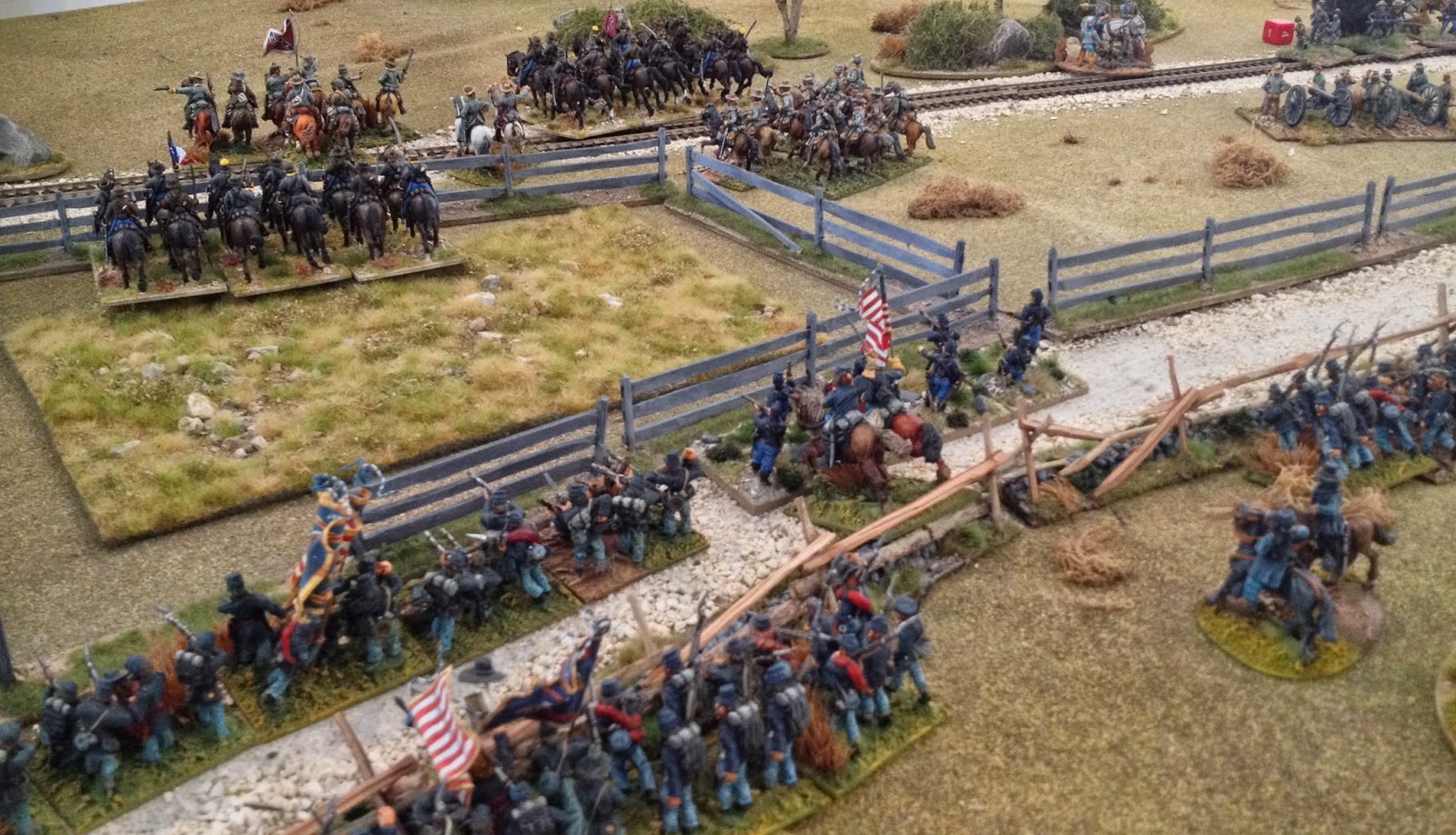 with the presence of a complete Federal infantry brigade plus supporting artillery the Confederate cavalry start to disengage one brigade at a time. 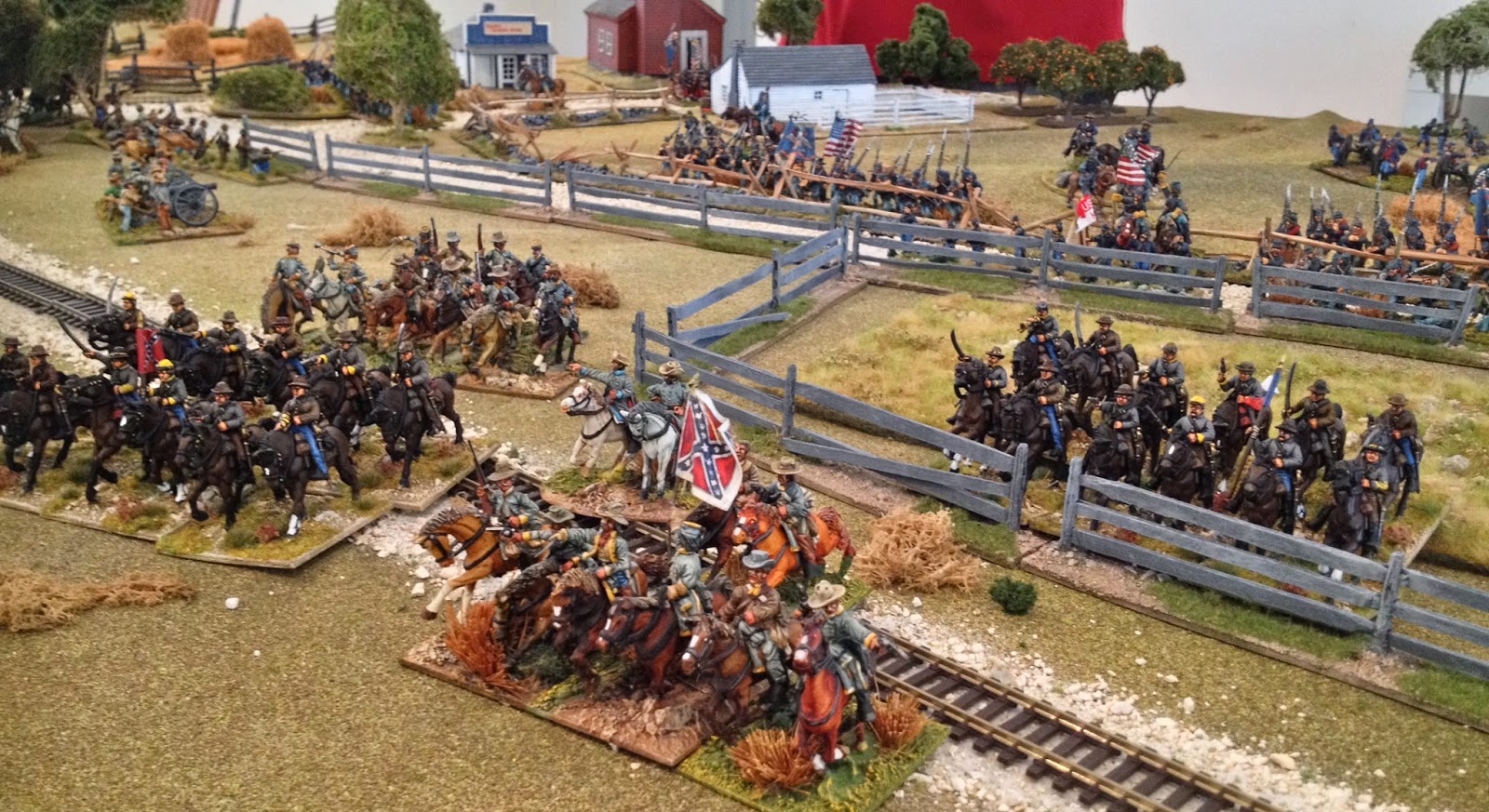 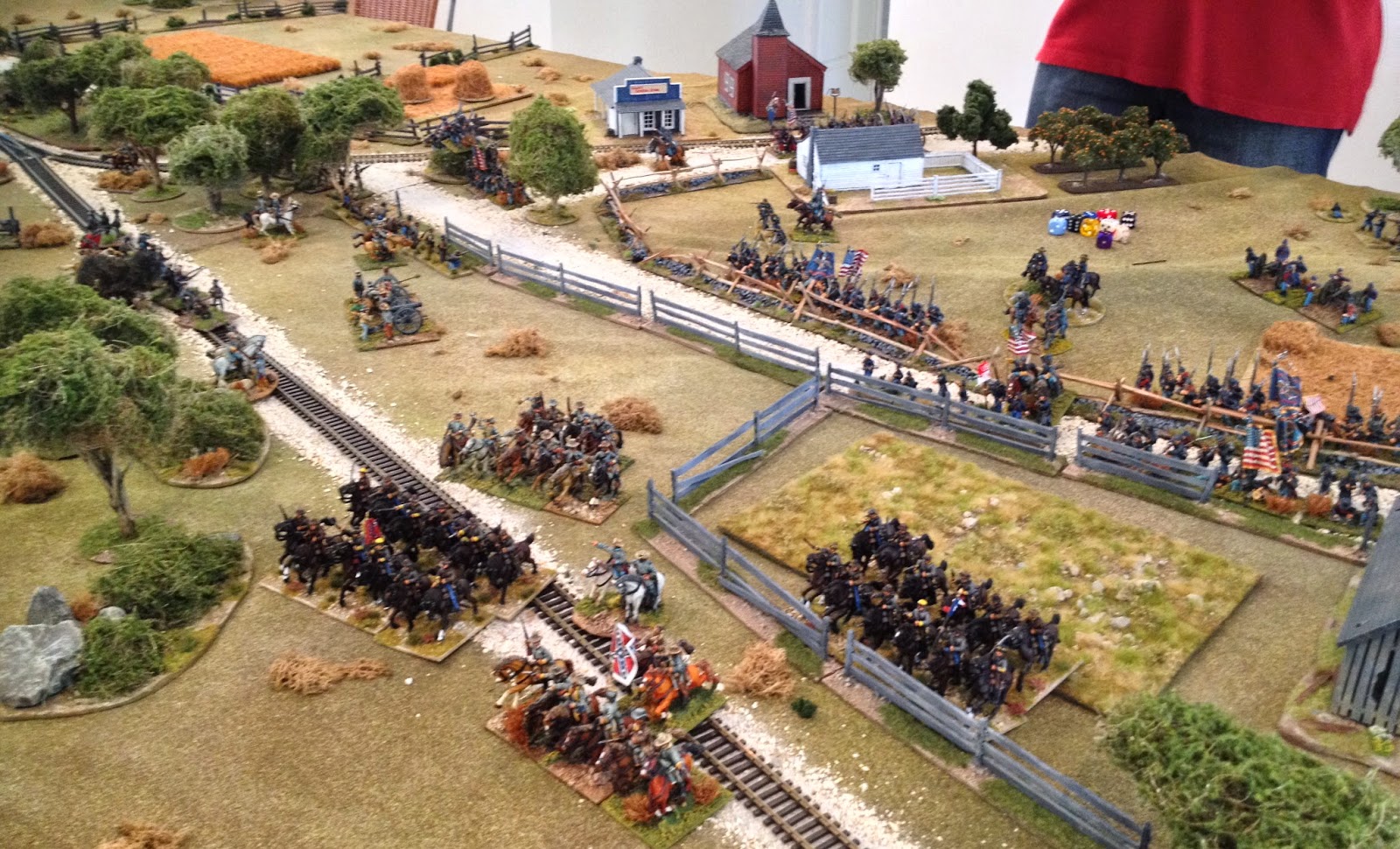 With the rebel right flank withdrawing pressure is maintained on the centre in hope of forcing another rebel cavalry brigade to withdraw…however this brigade held firm a couple of more turns and just long enough to destroy a length of track. 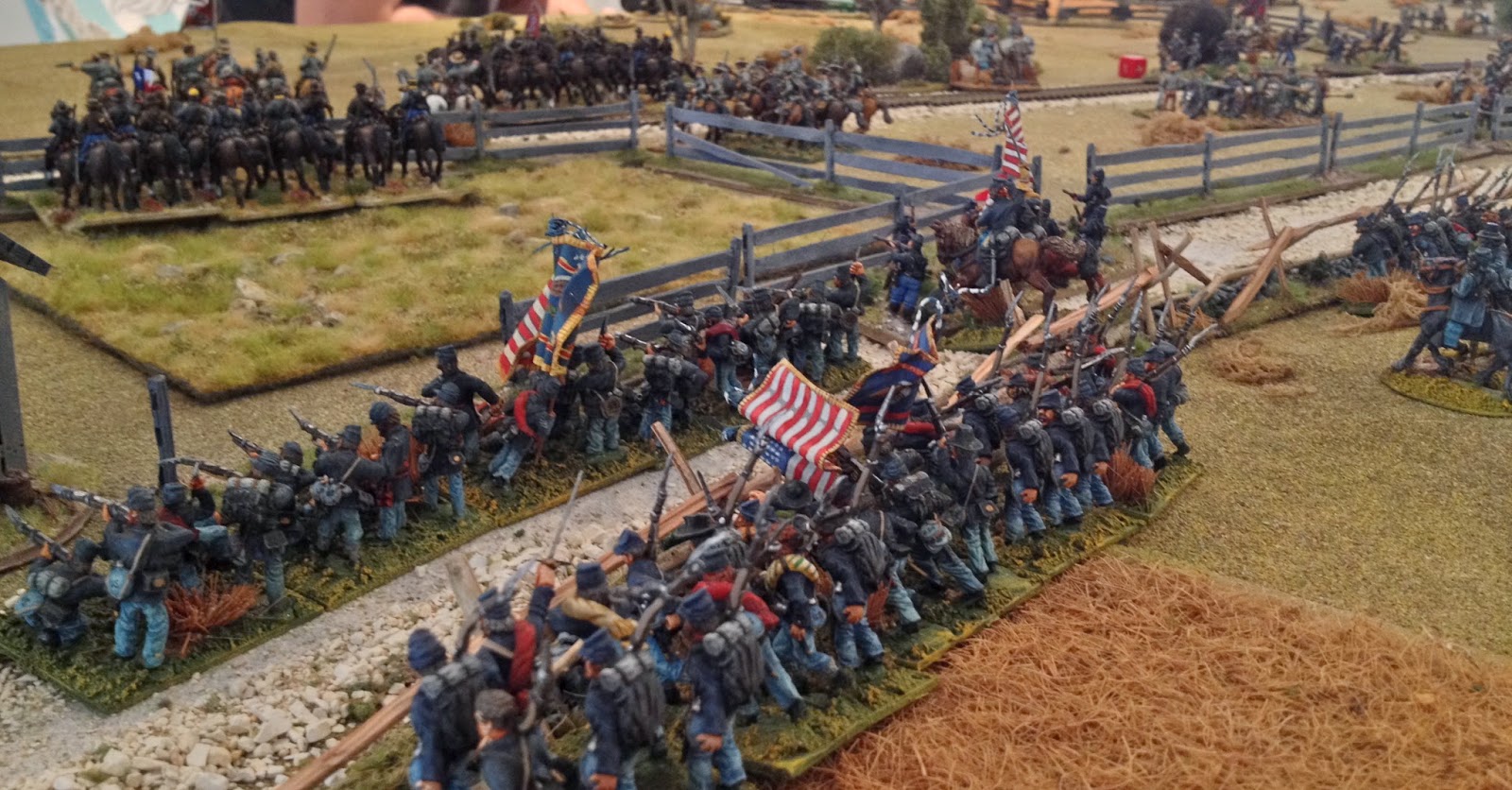 Federal infantry surge forward firing as they go and inflict a number of casualties on the withdrawing rebels. Veteran Union cavalry also pursue but on foot this time..however the horse holders have been called forward and the lads will soon mount up. 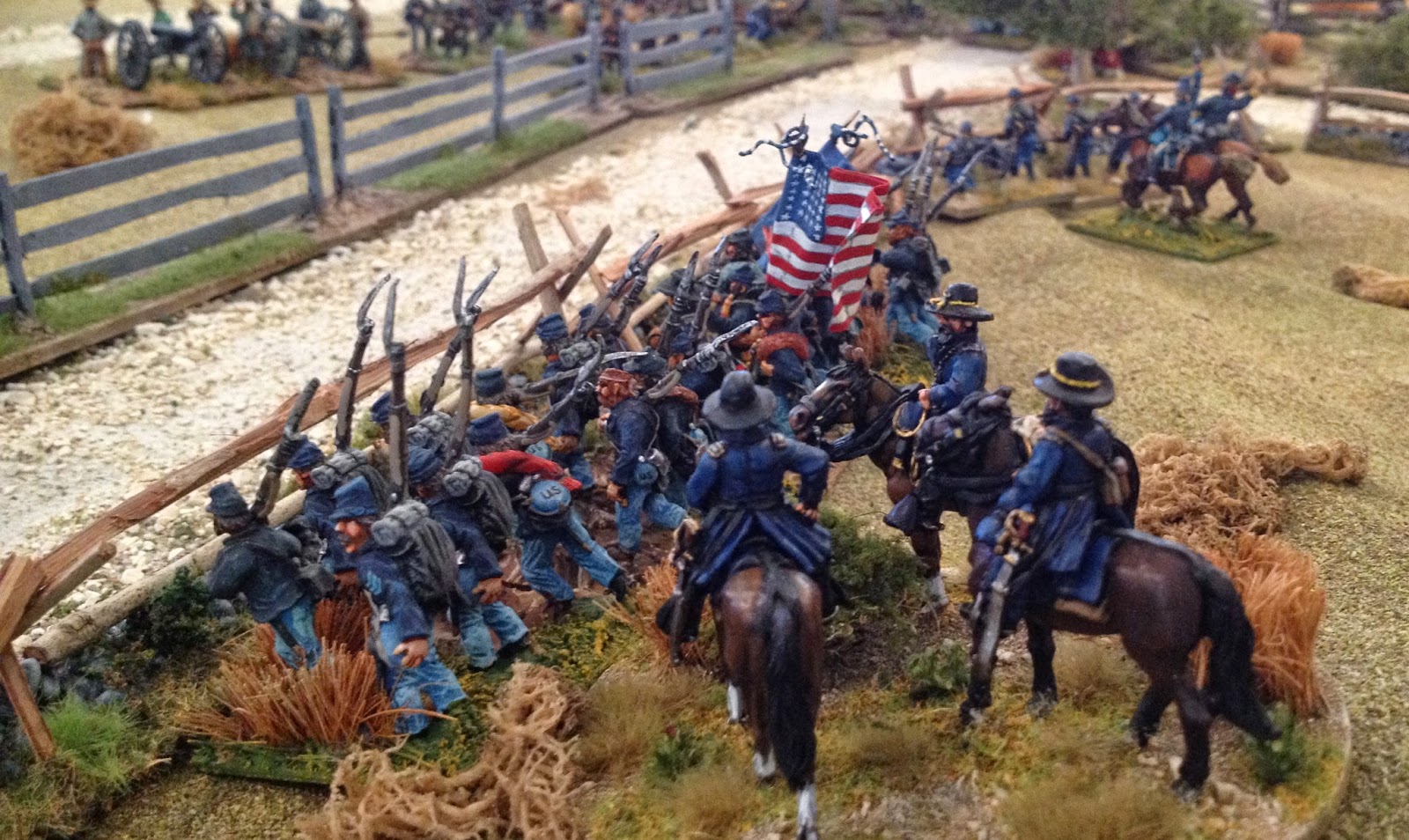 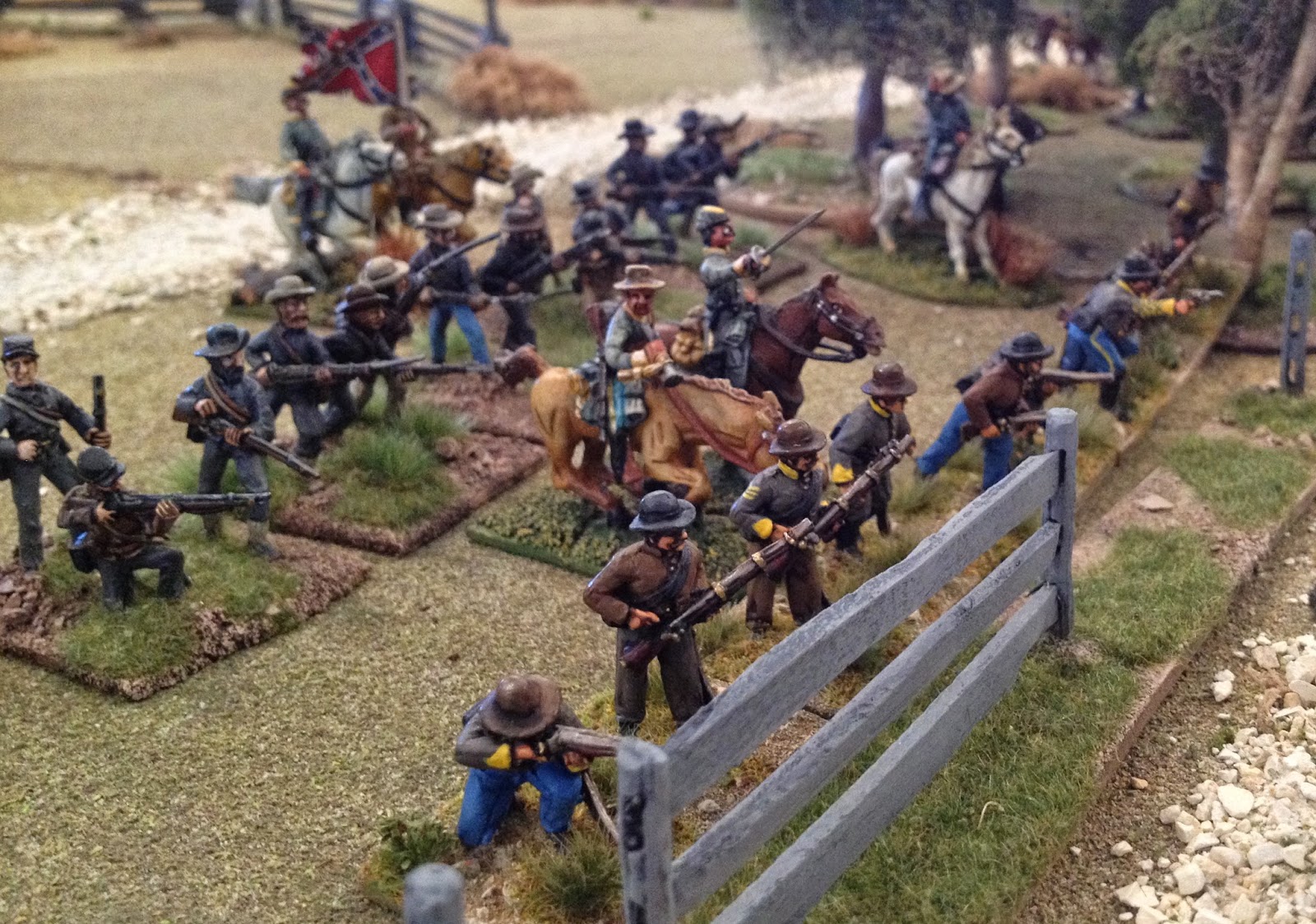 The heavy Confederate skirmish line still holds but only for another few minutes as Union infantry start to make their numbers felt. 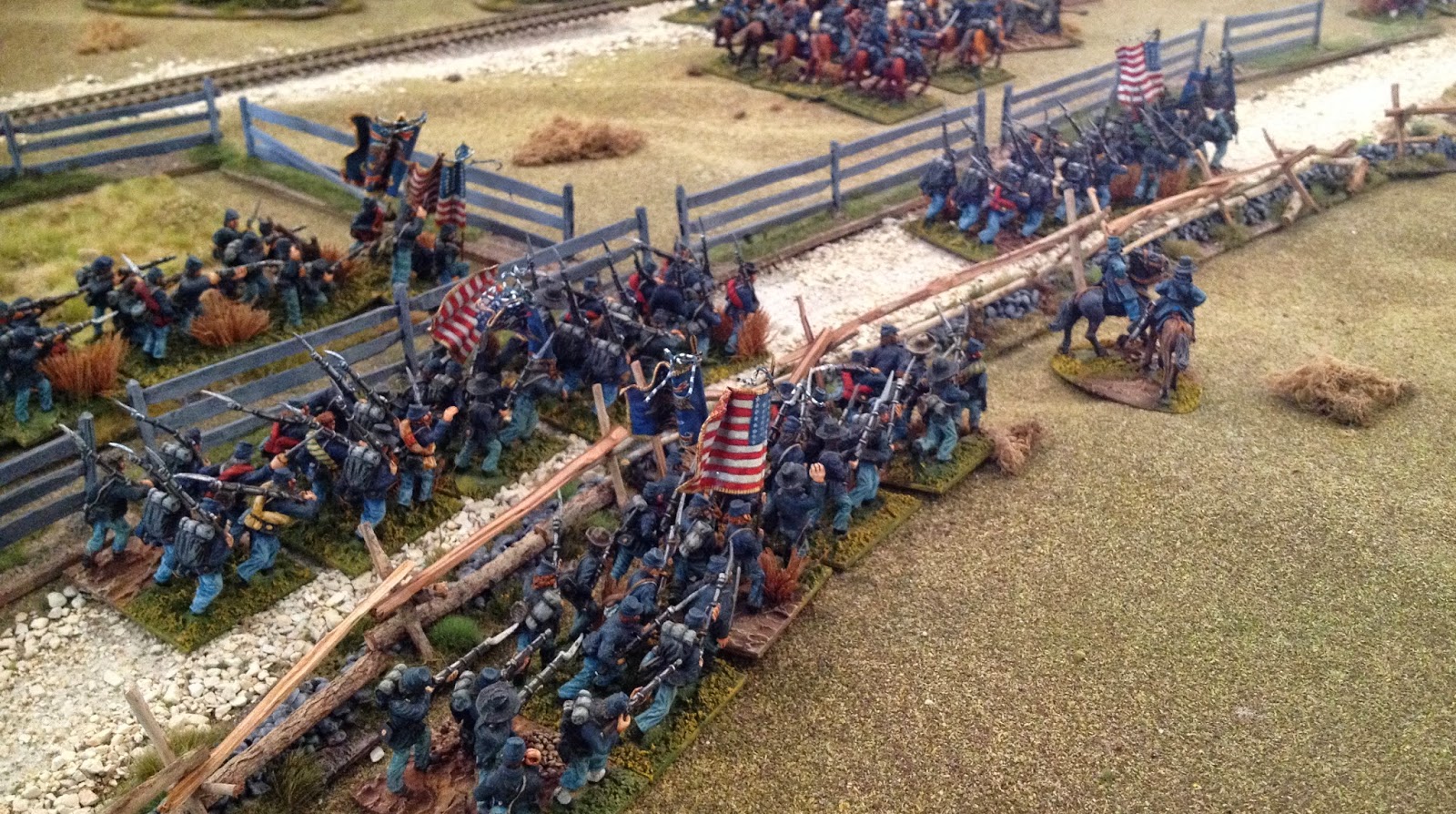 With the Union left secured Dave reforms his infantry brigade into march columns in hope of catching a few more rebel raiders before they leave the area. 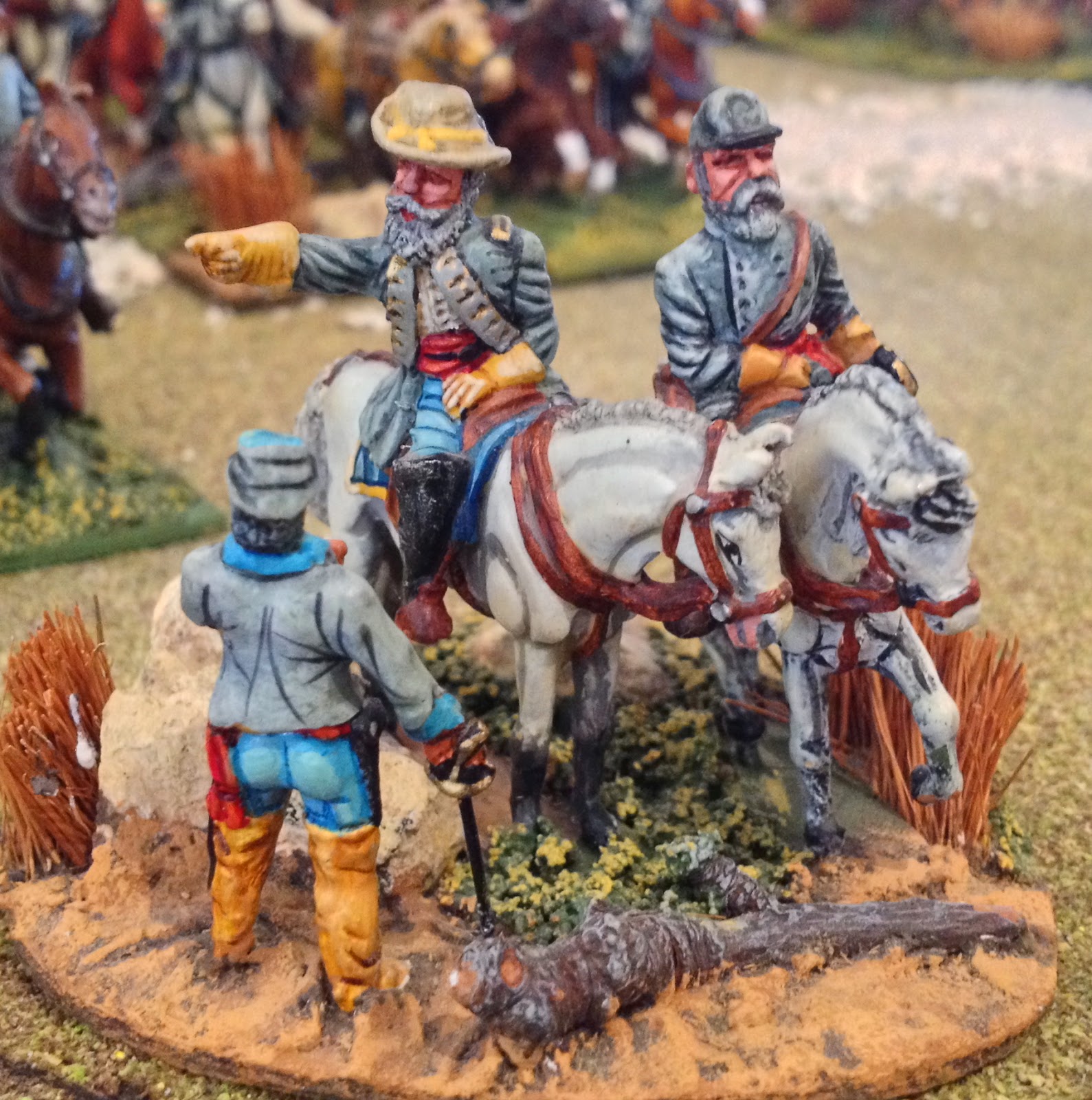 The Confederate Divisional commander noting that enough damage has been done orders the remaining two brigade to disengage. 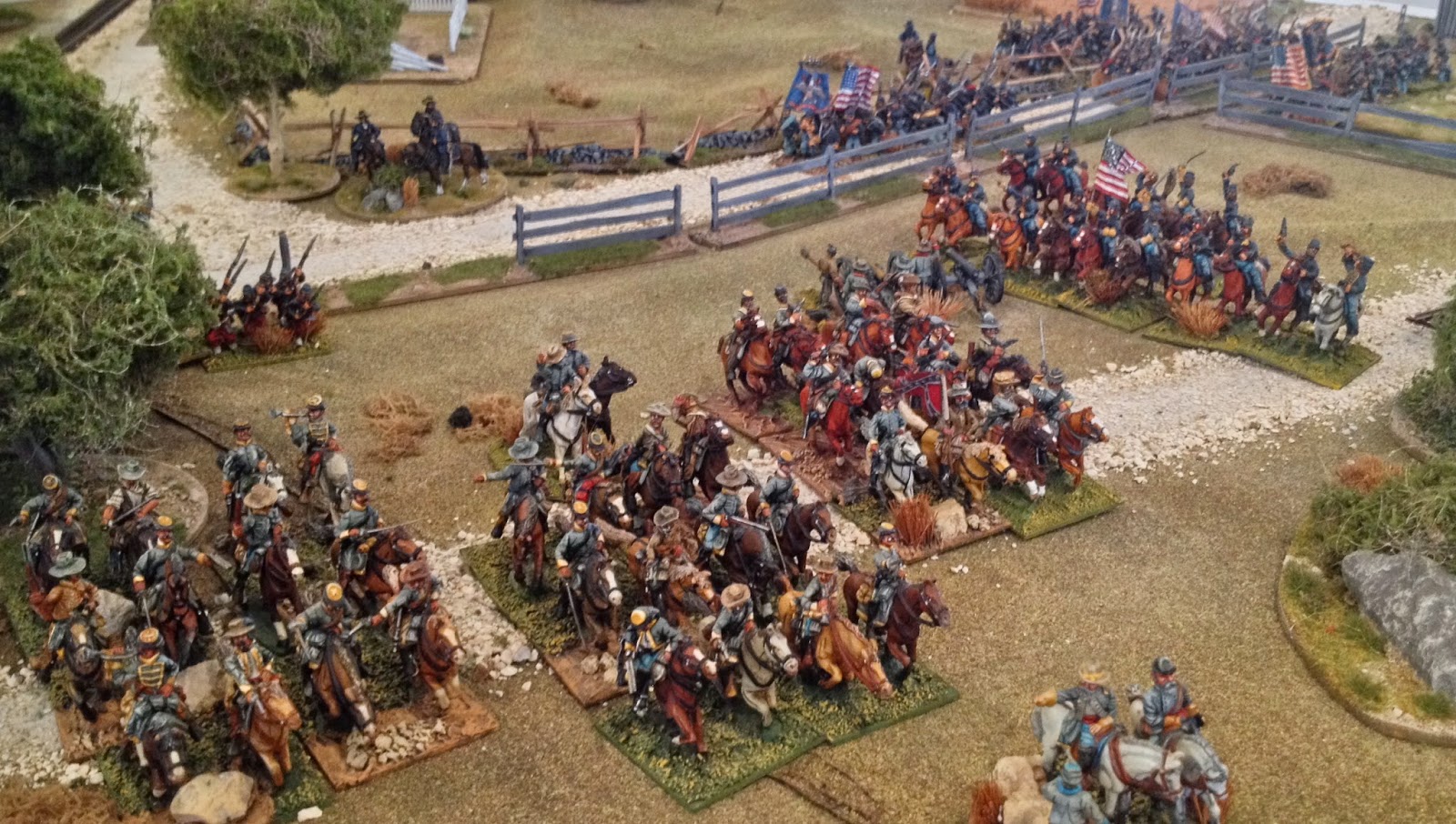 And disengage they do, however one battery is caught in the flank by Dave’s veteran cavalry and are captured. The lads then charged on and hit an other rebel cavalry regiment in the flank capturing a number of their men and forcing the rest to flee. 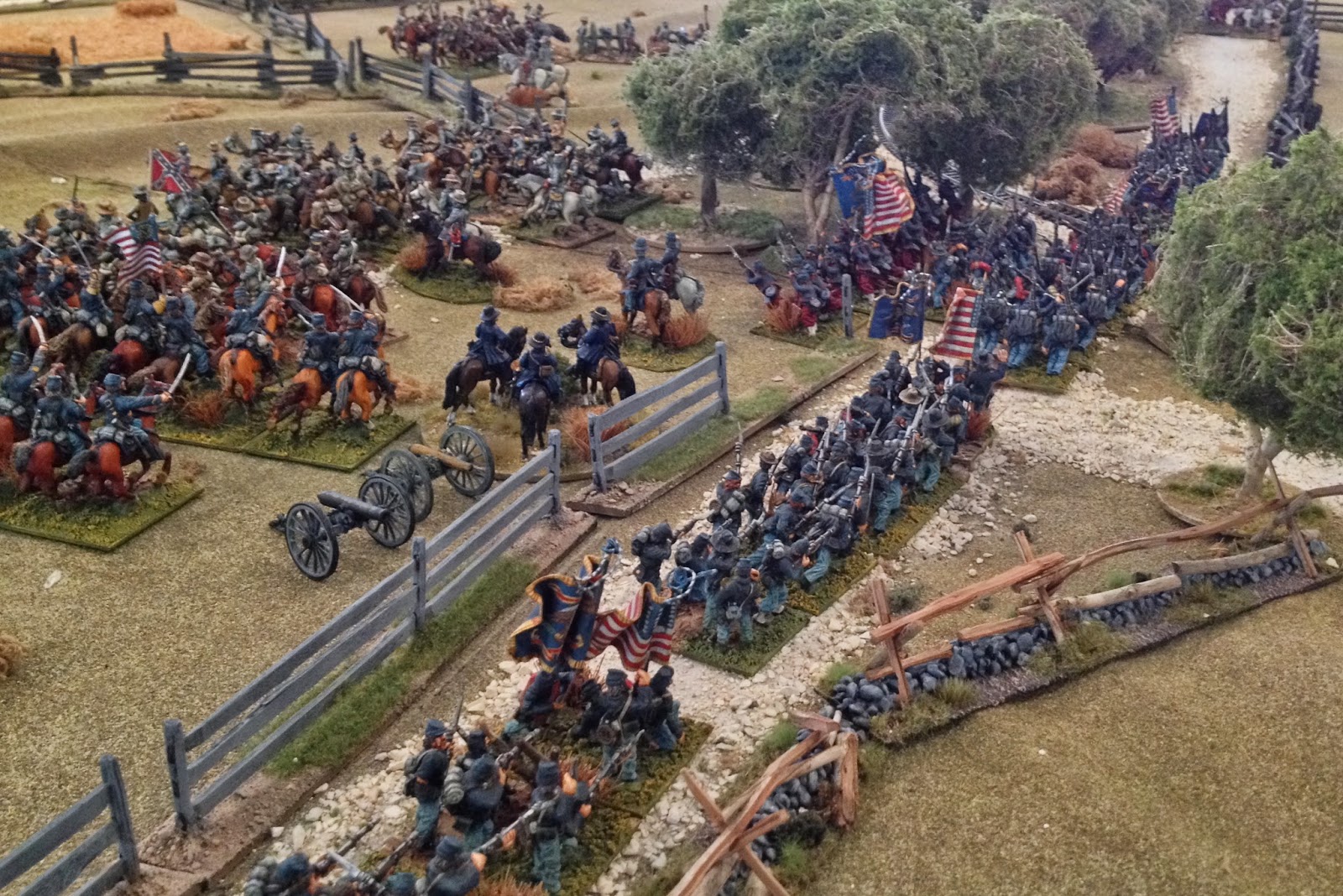 With his cavalry attacking the Confederate cavalry on the left Dave keeps pushing his infantry along the turnpike hoping to cut off the rebels retreat. 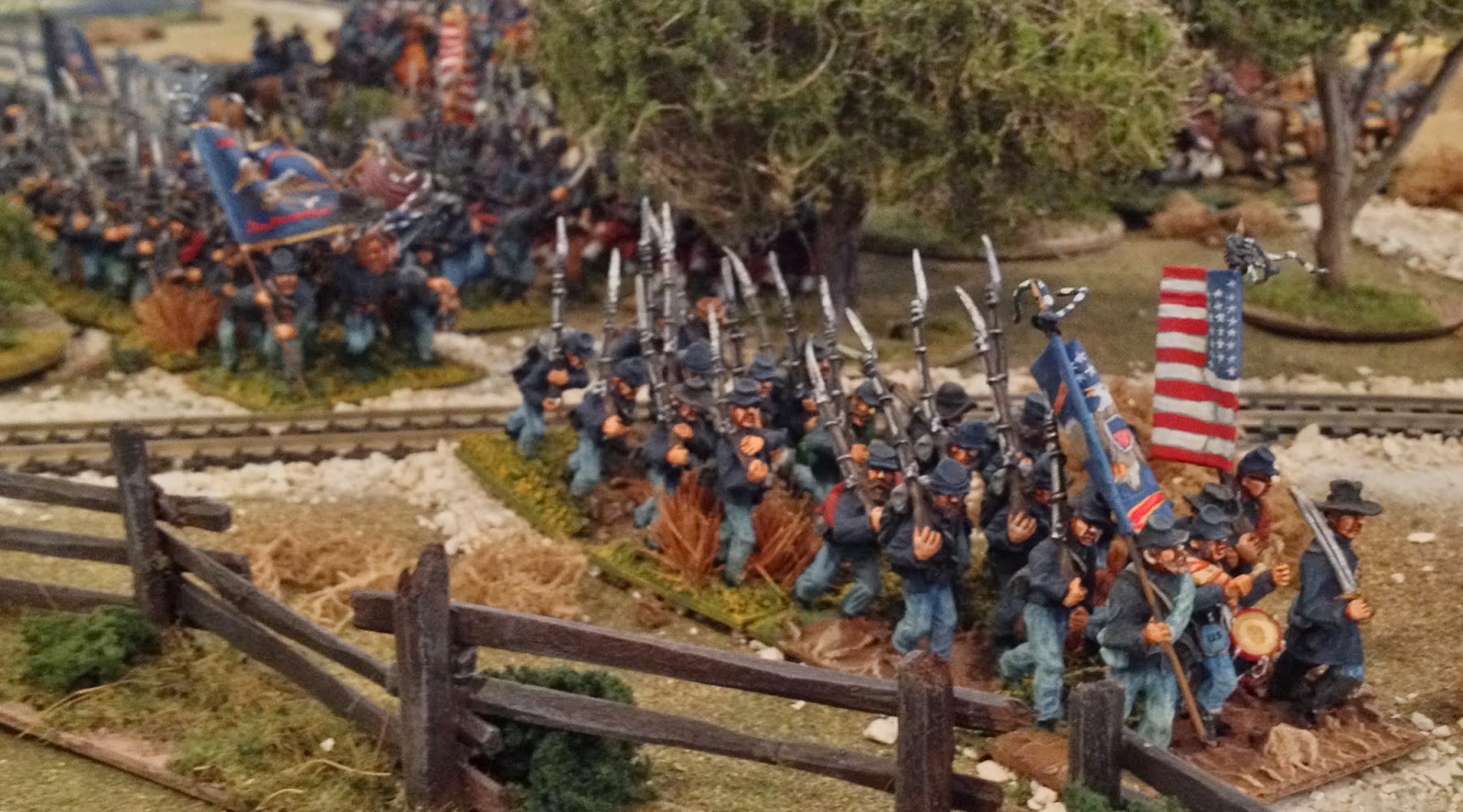 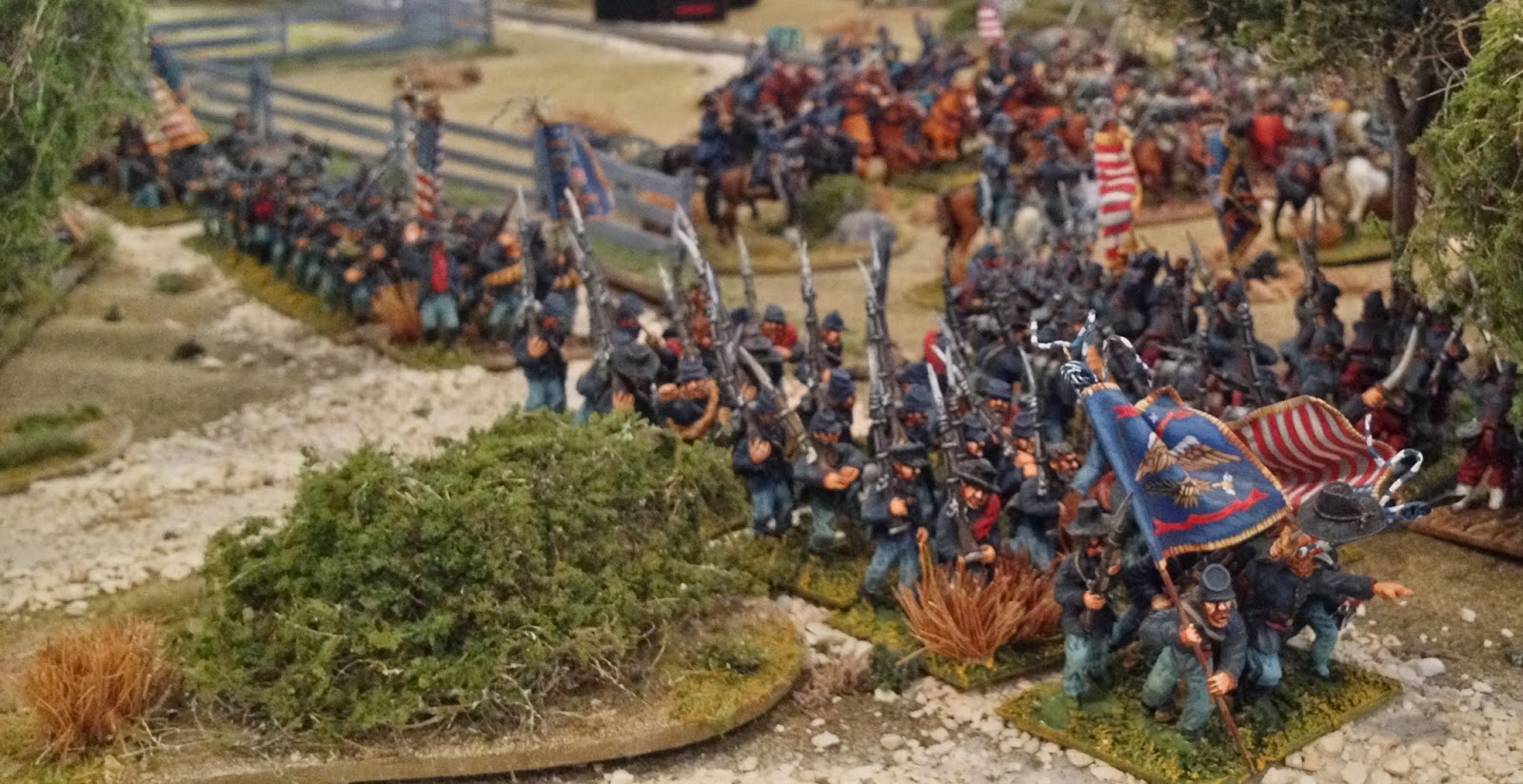 Dave’s troops make it just in time. One of Brian’s units is slowed by the thick scrub and soon realises they will have to fight their way out or surrender 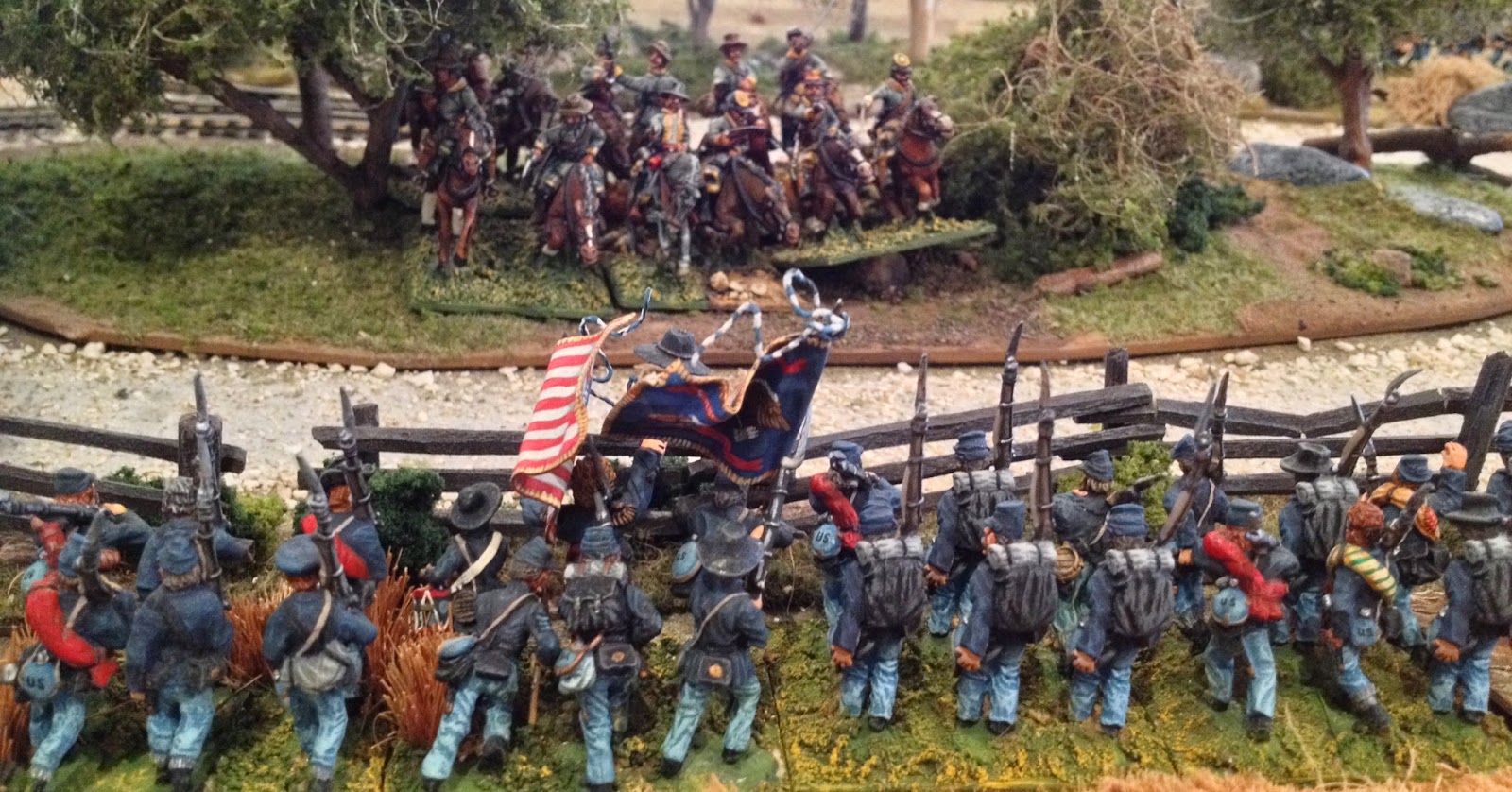 The rebel cavalry charged and pushed back one of Dave’s regiments only to see it reform. Brain’s lads were caught and after making another charge, which failed to break through they surrendered. Thus ended the game, A Confederate victory but one not without loss. 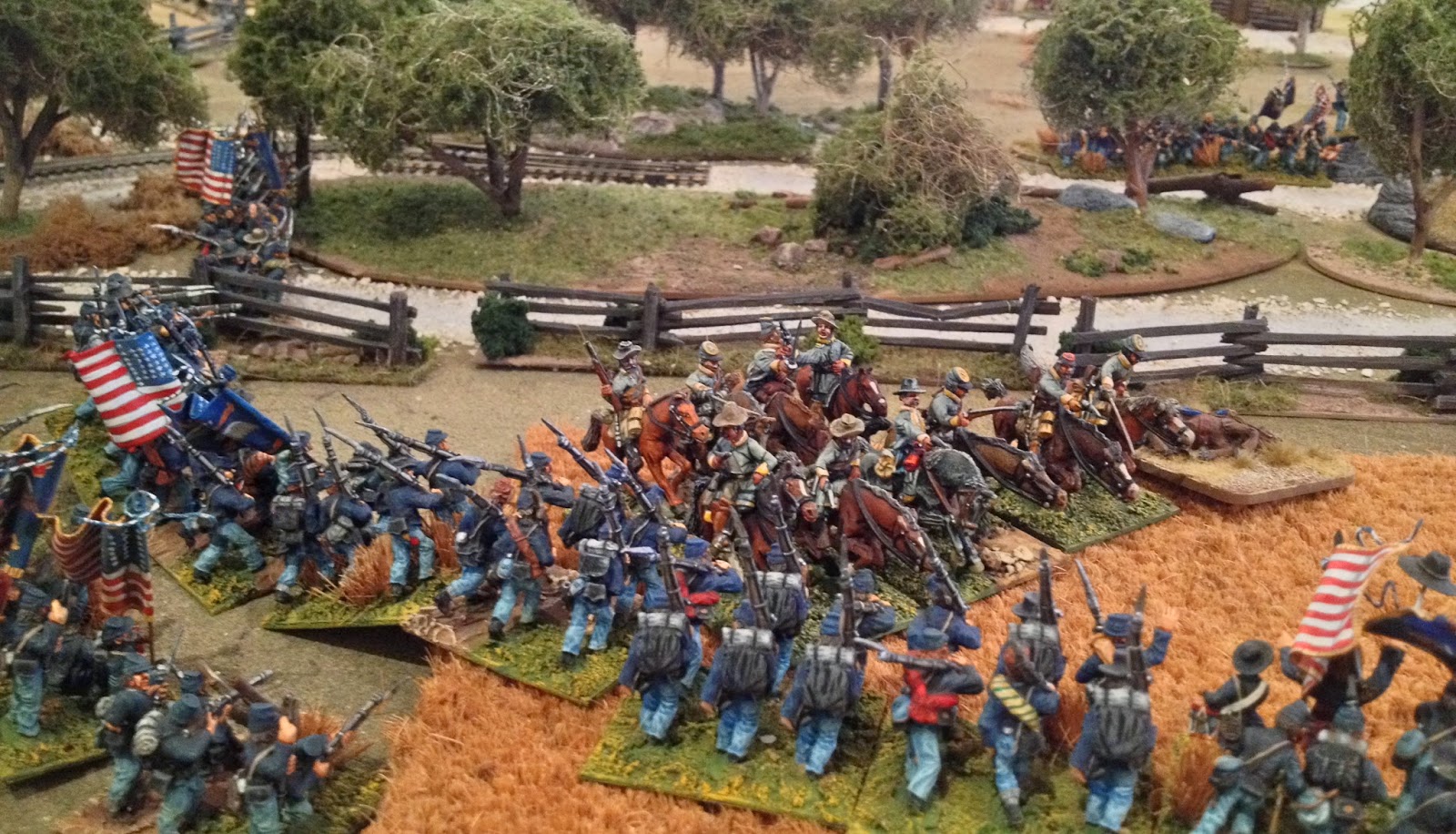