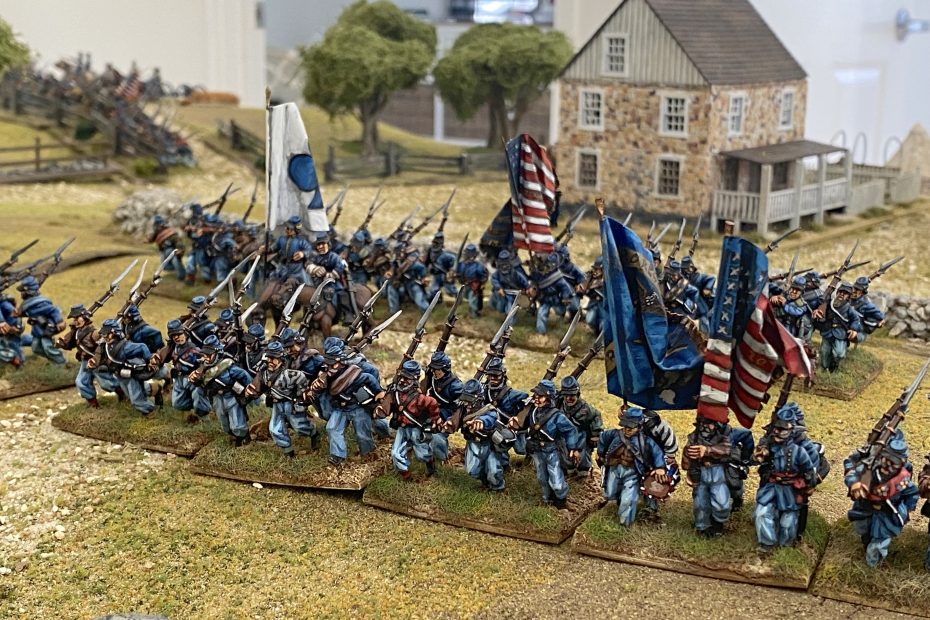 the First Battle of Winchester 25th May 1862

Yesterday afternoon a few of the lads from our club got together to play The First Battle of Winchester. The scenario, initial dispositions and reinforcements game from Book 4 of the Guns of Gettysburg Scenarios for the American Civil War, which are highly recommended. However, after a little converting, we utilised the Regimental Fire and Fury rules but with a few local modifications to speed up the game.

After both sides adjusted their respective Brigades positions the Confederate commanders had the first turn, of which they deployed two additional batteries of artillery the initial deployments on to their right flank to commence firing on the Union troops holding the Camp Hill and the township of Winchester. The Union player however (as per RFF), in their defensive fire phase, was able to perform counter battery fire on the Confederate guns deployed opposite Brewer’s Hill and silenced them with a roll of 10….impressive.

The next two turns saw more counter battery fire from both sides and further deployment of reserve forces. The Union deployed the remainder of Hatch’s Cavalry Bde and the two wings of the 10th Maine, and the Confederate commanders deployed a further two brigades of infantry from Campbell and Trimble’s Brigades. In addition, the Union artillery commander was able silence a further two batteries of Confederate guns with a further two rolls of 10…incredible rolling from Josh.

On turn five another Confederate Brigade deployed onto the table, Fulkerson’s Infantry Brigade, and the Confederate commanders were now able to put a little be more pressure on the tow defending Union Infantry Brigades. However, on turn six the Union commander on Brewer’s Hill, Gordon, went over to the offensive, pushing the attached 1st Michigan cavalry out onto the exposed Confederate left flank and then went onto to advance the whole brigade off Brewer’s Hill and forward onto the Confederate Infantry brigades defending the high ground to the south. With no Confederate artillery to counter the Union advance the Brigade was able to cover the ground with limited loss.

On the Union left the fight was more desperate. Confederate counter battery fire had silenced the only Union Battery on Camp Hill and Trimble’s Infantry Bde was able to advance up on to the hill before a Union charge checked their advance. Over the next two turns there was fierce hand to hand fighting from both sides to try and gain the hill however, by the eight turn the final Confederate Brigade, Taylor’s Louisiana Bde, made it to the field and was able to tip the balance of numbers to the Confederate favour. Tribble’s Bde was able to successfully charge and defeat the two 10th Maine wings and capture a third of the two in the process and 5th New York cavalry failed in their mounted charge against the supporting Confederate battery on the crest of Camp Hill and were repulsed with heavy loss of life and horse. Victory was in the clasp of the Confederate forces on that side of the battle.

It was a different story however on the other side of the battle. The rapid Union advance, and the devastating supporting artillery fire had forced the Confederate forces on that side of the battle to slow their advance and pull forces back onto the revers slop of the hill, allowing the Union troops to capture the crest. However, the Confederate commander on that side was not going to make it easy for the boys in blue and in the last two turns of the game counter attacked and drove the majority of the Gordon’s Bde of the crest and down the other side of the hill.

This unfortunately was too little too late and with the setting of the sun the firing and battle for the day ceased. Major General Banks, the Union Commander, was able to withdraw the remainder of his troops safely away from Jackson’s Army and survive another day.

The battle was deemed a draw or rather a Pyrrhic Victory for the Confederate, though they took one hill, and the Union Army withdrew in the night, they lost three batteries of guns and took heavy casualties from Union counter battery and musket fire in the process.

Thanks to the Union Commanders, Josh and Dave, well played and fantastic rolling from Josh on the Union right flank. And thanks to the Confederate Commanders, John and Rowdy. A great game for all and loads of fun. Hopefully there will be more Valley battles to come.