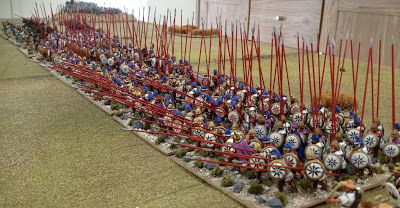 The Conquest of Greece Begins

Yesterday afternoon Myself, Jeff Smith, Dave Hancox and Dave Lowe played a great little game of Impetvs. The period we focus on, for building each side, was around 340BC with Athens and Macedonia struggling for control of Greece. Each side was close to 440pts (give or take a few points). The Athenian Army consisted of: The game concluded with a Macedonian victory, however it was a very hard fought victory at that. The Hoplites proved extremely hard to defeat, especially the Elite hoplite units, who fought with a VBU of 6, where the Macedonian pike where only VBU of 4. The pike, which was able to combine three units in to a large formation and absorb numerous casualties without loosing their Impetus, was the only way to over power the classic Greek hoplite formation. The Light Foot (FL) Thracian units proved good solid troops for both sides and I think if combined into an army would give any army a bloody nose. They fought very well on the flanks of both sides and for the Athenians they help defeat the Macedonian cavalry and tie down two pike blocks. The Athenian battle line, five solid units of hopilite of 24 figures each. The Macedonian General rallies his troops

Four units of Thracian Mercenary Peltasts fighting for the Athenian side. The Macedonian pike block, five large units of 36 pike each. Macedonian Prodromoi lancer proved very solid in the first few rounds of the game but were soon shot down by the Scythian horse archers. Caught with no where to run to the Athenian archers fought bravely before being destroyed by to combined pike blocks. Athenian Hoplites weather a storm of javelins from Illyrian Skirmishers 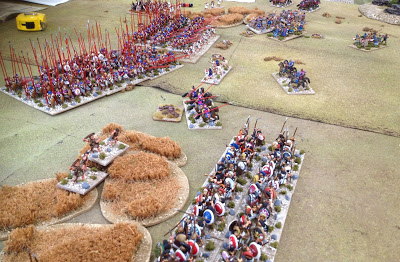 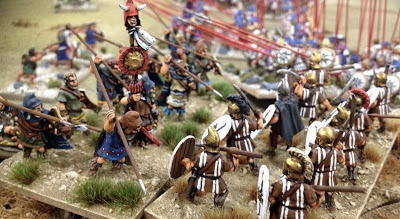 Thracian Peltasts from both sides  clash. 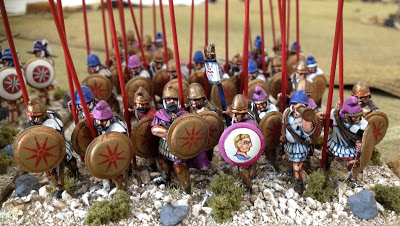 Where did that elephant come from?? Scythian horse archers fire and then latter charge the flank of the Macedonian pike. The Macedonian General is finally overwhelmed by the Greek cavalry and killed as he flees the battlefield. 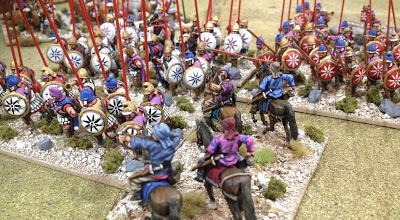 The Scythian horse charge an expose flank, who in turn are charged and defeated. 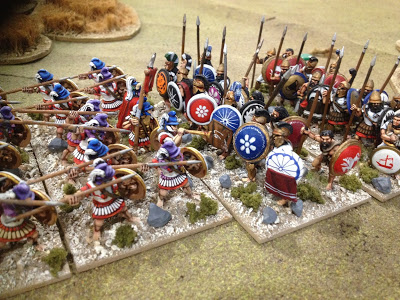 The final few turns saw the hoplite and pike clash and fight bitterly for victory. In the end the ability of the Macedonian pike to absorb numerous casualties brought them victory. 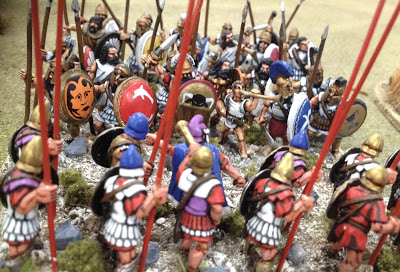 16 thoughts on “The Conquest of Greece Begins”