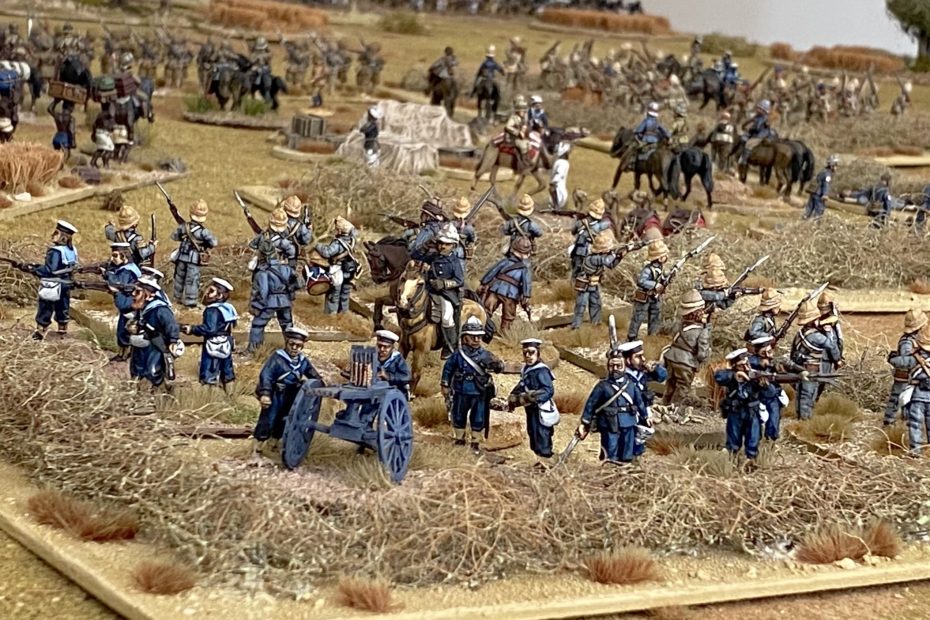 Today I and a few of the lads from the club played a fantastic Sudan game based closely on the Battle of Tofrek, which was fought on 22 March 1885 some 5 miles inland from the port of Suakin on the Red Sea coast of Sudan. A contingent of some 3000 troops from the British and Indian “Suakin Field Force” led by Major General Sir John Carstairs McNeill VC, GCVO, KCB, KCMG (under the overall command of General Gerald Graham) was attacked by a Mahdist force under the leadership of Osman Digna.

Our British forces consisted of:

Our Mahdist forces consisted of:

The main set of rules used for the game was Black Powder, however we utilised the fantastic ‘Random Effect’ cards from the Sands of the Sudan rules. The cards provided that randomness of the Mahdists attacks by rolling a ten-sided dice for each time a unit of warriors came onto the board. The cards also allowed for random events to happen to the British player….which were quite often not to the British players best interest, however the cards certainly provided that little bit of ‘Fog of War’ and keep the British players on their toes as could not always know for certain where the next attack would come from.

The first turn of our game saw five cards drawn for the Mahdi forces and one random event for the British forces…..which unfortunately was a loss of a wheel to their one of two MGs (the British players were not happy). Of the five Mahdist warbands on the table four went charging straight at the three companies of the 17thBengal Native Infantry. One company was hit by a unit of mounted warriors and after a brisk hand to and battle fled the field, however so too did the mounted warriors.

The 2ndturn saw another six warrior units enter the table but this time the majority of them charged and attacked the zareba containing three companies of the 1stBattalion Berskshire Regiment and the damaged MG’s (which was unable to fire). One company was forced out of the zareba and the MG was lost in a fierce hand to hand struggle. Another charge of warriors hit the hard pressed two remaining companies of the 17thBengal Native Infantry, who again after a hard fought and bitter hand to hand battle were overrun with many fleeing to the rear and back to Suakin. It was not looking good for the British commanders today.

The following two turns saw the remaining warrior units charge on to the field of battle, this time attacks were made on a single company of the 1stBattalion Berskshire Regiment, which had been out collecting wood just prior to the attack and further attacks made against the Royal Marine Light Infantry zareba. A company of  the 1stBattalion Berskshire Regiment manage to counter attack the Mahdist troops in their old zareba but were to limited in numbers after the first attack and were forced to retire back to where they started their charge. The zareba soon fell to the Mahdist forces.

The following two turns saw the 17thBengal Native Infantry and the Bombay Native Infantry move from their original positions and advanced towards the struggling two remaining companies from the Berskshire Regiment, delivery rapid volleys fire into the flanks of the charging warriors.  It was also very lucky that the baggage train and camels slowed down the Mahdist warbands. The 6thturn also saw one company of the 1stBattalion Berskshire Regiment, with their commanding officer attached Lt Col A G Huyshe, defeat another determined charge and then fix bayonets and counter charge the retreating Mahdist warriors. Furthermore, the cavalry relief force was now on the field of battle.

The last turn of the day saw the final charges of the Mahdist forces on the Royal Marine Light Infantry zareba.  After some of the most chaotic and determined fighting of the day last remaining MG was soon out of action but the zareba remained in British hands. The 10thHussars then made the final charge of the day and hit a Mahdist warband on their flank and again after some fierce hand to hand the warband fled from the field in disorder. Victory to the British forces but the battle was by no means a victory to be proud of, many fine troops had been killed, horribly wounded or had simply run from the field of battle…..but a victory non the less.

Thanks to Brian Buskell, Dave Lowe, Terry Moran, Tim Jolly and Joshua Robert for playing and enjoying the game and Brian Buskell for making up the numbers of troops on the table. Figures were a mix of Old Glory, Empress Miniatures, Perry Miniatures, Wargames Foundry and Castaway Arts.