What a great way to spend a Sunday afternoon playing a good game of ACW. The Battle of South Mountain – Turner’s Gap focusing on Hatch’s Divisional attack and the Iron Brigades attacks on D.R. Jones’s Division (of Hills Corps) defensive position across the National Road. Hatch has three Brigades with 13 regiments and Gibbon’s Iron Brigade with another four regiments. Jones’s Confederate troops are in three Brigades of 11 regiments (Garnett, Kemper and attached Colquitt Brigades). I have combined a few of the smaller regiments into larger units and provided Hill some additional artillery.

Battle for South Mountain at Turner’s Gap could have gone either way. D.R. Jones all Virginian Brigades under Garnett and Kemper fought valiantly, repelling several charges from the Union forces. However, numbers proved to much for the Confederates and they were eventually forced to withdraw, but only after inflicting some heavy causalities on Phelps and Patricks Brigades.

On the other flank Gibbonn ‘Iron Brigade advanced up through the open fields and up to Colquitt’s Georgian Brigade. The Iron Brigade came in hard and fast, pushing the Georgians back from their defensive position, but in turn they to were pushed back, taking heavy causalities and falling back off the field. Next to attack up the National Road in hope of taking the major objective was Doubleday’s mixed New Your and Indiana Brigade. They to fought hard and again pushed the Georgians back. But again the Georgians rallied and counter attacked Doubleday’s Brigade pushing them back again from the main objective. 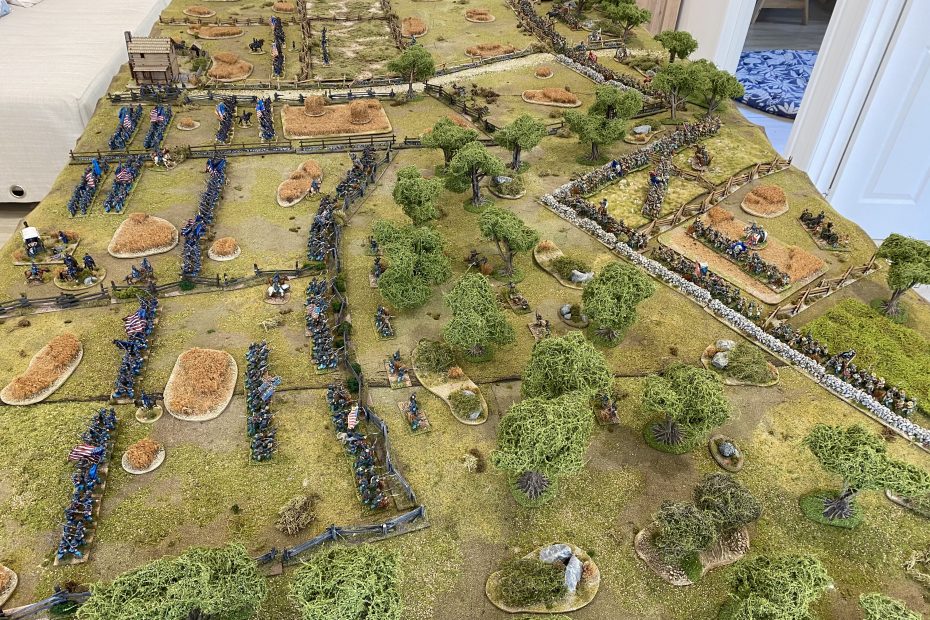