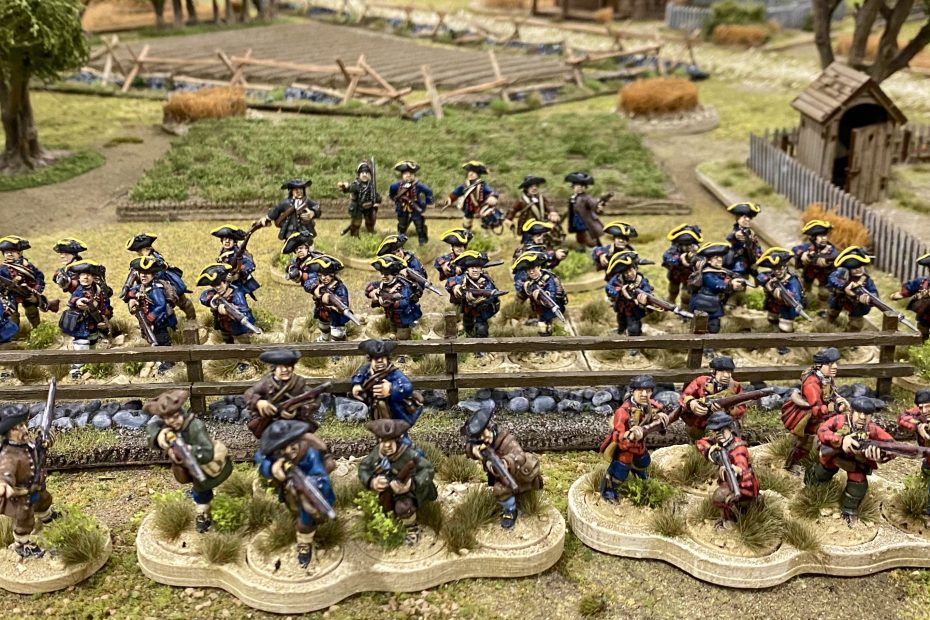 Today Myself and two other lads from the club, Brian Buskell and David Lowe, played a great little Sharp Practice game. The period we choose for the afternoon battle was the French & Indian War and the scenario from the basic rules was to sweep the table. For our game this meant that the French were to conduct a large raid and look for supplies from the three farms that were located in our valley. The British/Provincial forces were to naturally stop that from happening.

The French raiding party consisted of three units of French Marine Infantry (commanded by Capt. Berthier and Sgt Duportail), two tribes of Allied Indians (commanded by Standing Tall and Crouching Beaver), one unit of Coureures de Bois (commanded by Phillip Macron) and to give the raiding party a little backbone two units of Grenadiers trailed alone for a fight (commanded by Major Baptiste). In all the French force totalled around 87pts (including leaders).

As the French were on a raiding parting they were to have the first moves and out British lads had to roll a combined total of 14pts before we could start deploying our units. Thus, the first on the table for the French were the Grenadiers who sent one unit straight in the first house to grab the loot and supplies (luckily on their second turn they followed orders and did not continue to loot….they that would have been funny. The next French unit on the board was Standing Tall with his Allied Indians followed next by my Provincial Regulars under Maj. Adams and Capt. Martin.

The next turn saw both sides deploy more forces including Crouching Beaver and his tribe, a unit of Marines, under the command of Sgt Duportail, my Light Infantry skirmishers commanded by Sgt William Trent and lastly the Coureures de Bios who deployed straight from their deployment point and delivered a volley in to my Light Bobs and knocked out Sgt Trent in the process…..nasty.

The next couple of turns saw my Highlanders under the command of Lt Frazer deployed out into line and deliver a staggering volley into the Coureures de Bios and the Marines, killing a man in each unit. Then on the French left the last two remaining Marine units, under the command of Capt. Berthier, were able to deploy and march quickly into the nearest farm yard and deployed into line, anchoring the French line.

Then it was the turn on the Colonial Rangers who over the last couple of turns add slowly been working their way around the flank of the French left. Sgt Thomas’s rangers were the first to deploy and fired a volley in to the Marines killing a man in each unit. Then they were quickly followed by Sgt Morgan’s rangers who again fired a well-directed volley at the Marines. Capt. Berthier however, was made of sterner stuff and after steading his boys directed a well-aimed volley back at the rangers, killing three.

Next to move was Crouching Beaver’s warriors who with their blood up decided to charge Lt Frazer’s Highlanders, who were now, so they thought, very safe behind a rail fence…….I do not think they had every faced a charge from Indians before and suffer seven points of shook from flying tomahawks (bloody hell) then caught unloaded they Highlanders tried to fight back but then Lt Frazer was wounded and six of their number fell to the fierce Indian assault….my Highlanders ran….and the British left flank was open.

Crouching Beaver however, was not finished collecting scalps that day and in the next turn attached the Light Bobs on their flank…..Sgt William Trent took a hit and went down as too did three of his men…they too were out of the fight.

Seeing all the action on the left flank and Crouching Beaver taking all the scalps Standing Tall wanted to show that he too could take English scalps so with a whoop! He called his tribe to charge the left flank of the Provincial Regulars. Fight the Provincials did but than again another leader was done, and Capt. Ben Martian was dragged away from the melee by his remaining troops….it was not looking very good for Maj. Adams first fight against the French.

But in the end Standing Tall saw his chance and charged the Provincials in the flank again, knocking down Maj. Adams in the process and winning the battle. A great victory to the French and a very successful raid.

Thanks to Brian and Dave for a great game and to John for loaning the majority of the figures.