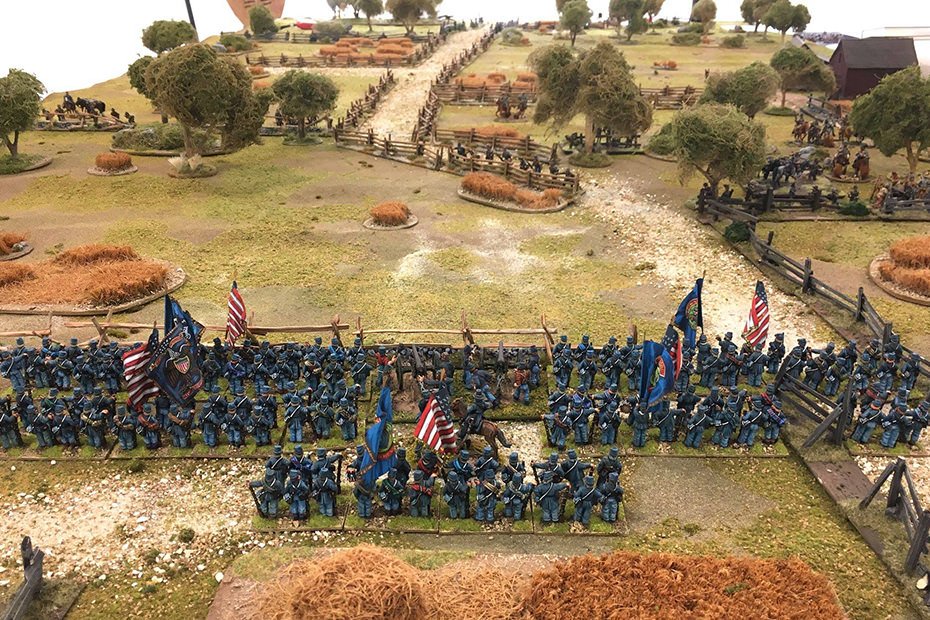 Just a few images from our game yesterday which was based on the Union 5th Corps advance to Spotsylvania Court House on the 8th May 1864. The battle starts with two Confederate Cavalry Brigade slowing falling back from the Union advance in an effort to delay their advance. This, in turn, allows the Confederate infantry to deploy on the high ground called Laurel Heights, where they soon dig in and wait for the Union troops to attack.

The scenario for this game came from Gordon C. Rhea ‘The Battle for Spotsylvania Court House and the Road to Yellow Tavern, which is the second book and a five book series he has written about the Overland Campaign of 1864. A fantastic collection to have and a must read for those interested in the period. Our battle starts with Major General Fitzhugh Lee’s Cavalry Division slowly and skilfully delaying the advance of Warren’s Union 5th Corps. The Confederate cavalry was to delay long enough for the  Brigadier Gen Kershaw’s Infantry Div of the 1st Army Corps to deploy across Laurel Hill and dig-in.

I will have to write up a full battle report tonight for you. Until then please enjoy the images.

The first few images of this post show both Lomax’s and Wickham’s cavalry brigade deployed to slow the Federal advance, which is mainly made up of three brigades from Brigadier General John C. Robinson’s 2nd Div and one brigade from the 1st Div (the 3rd Brigade commanded by Brigadier General Joseph J. Bartlett)

Two Federal Brigade deploy on either side of the Brock Road and advance against the Confederate cavalry.

The determined Federal advance slowly forces the Confederate cavalry brigades to fall back.

Kershaw’s Division advances on to Laurel Hill and starts to dig in.

Union Commanders converse and consider their next move

A desperate charge of Confederate cavalry is stopped by a well aim volley.

Four Federal brigades deploy in support of each other and push the enemy cavalry off the first ridge line.

A charge on the Confederate Horse Artillery fails and the regiment is forced to withdraw from the battlefield. They did not want to give up their guns.

The Confederate cavalry have done their best to hold back the Union advance and eventually withdraw from the battlefield leaving the fight to the infantry.

With the enemy cavalry departed from the battlefield General Warren directs his Corps to take Laurel Hills.

Kersaw’s boys dig-in across the hill, however Humphrey’s Brigade of four regiments is slow to deploy.

Both Confederate brigades are now fully deployed but will they to able to prepare their hasty works quick enough?

Federal Brigade attack across the whole line and take heavy casualties but are determined to take the ridge.

Kersaw’s Brigade has dug-in on the reverse slope of the hill and awaits the Union troops to attack.

Which is not long away. Repeated Union attacks are made on Kersaw’s Brigade (now commanded by Col john W. Henagan). But they can not breakthrough.

But on the right flank of the Confederate line, the other Brigade’s forward regiments have been taking heavy fire and casualties and have not been able to prepare their position.

The weight of the Union attack is too much for the Confederates and the right flank gives way. Laurel Hill is finally taken and Gen Warren has won a victory that will be written about for generations.

Thanks must go to John Maguire and Dave Lowe for playing the Federal Army and Greg Blake for commanding the Confederate Army. All the figures in the game were from John Maguire’s outstanding collection.