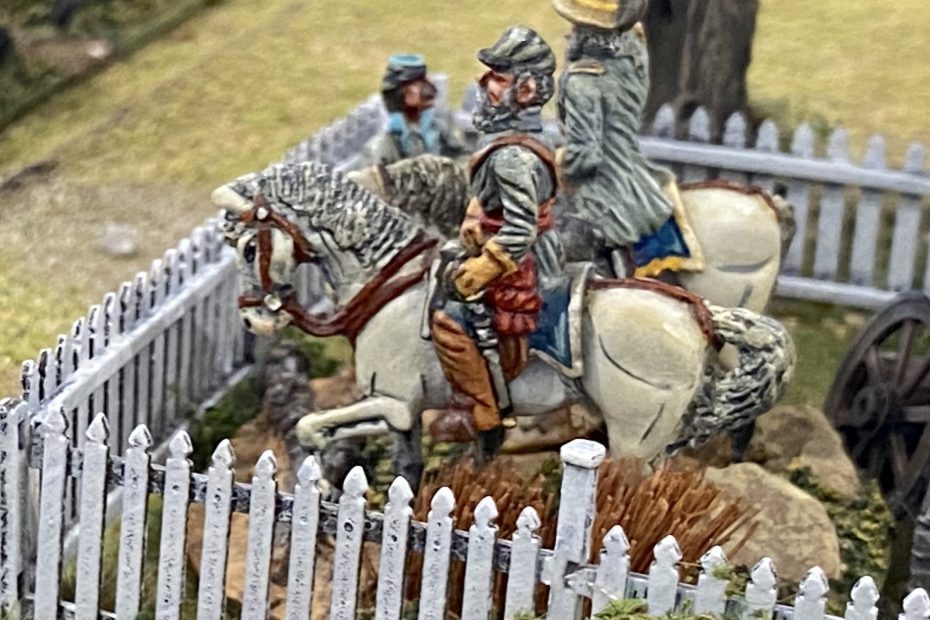 Last Weekend the lads from our local gaming club played a fantastic American Civil War game based on the Battle of Kernstown 23rd March 1862. The scenario came from the Guns of Gettysburg Scenario 4 book, which is based on Stonewall Jackson’s battles. However, Regimental Fire and Fury rules were utilised for the mechanics of the game and it was played in 28mm.

On the Union players side the commanders also had four brigades , three of Infantry (11 regiments), one of Cavalry (two units) and four batteries of artillery. The majority of the regiments were classed as green troops with a splattering of regular battalions to strengthen the Brigades. The Union forces objectives were to hold Pritchard Hill and hold the stone wall that stretched across Sandy Ridge. With two of the Union Brigades already deployed on the table and holding one of the main Confederate objectives, Pritchard Hill, it was the Confederates who had the first more.

The initial move of Fulkerson’s Brigade (two regiments and an artillery battery) was to attempt an assault on Pitchard’s Hill. As you can image the position was strongly held with Carroll’s Brigade of infantry (four regiments) and three batteries of artillery. All three batteries hit Fulkerson’s brigade and caused the commander to rethink his assault. The confederate battery had one gun damaged and silenced in the first round and the front infantry battalion also suffered a few causalities.

Over the next three turn the Confederate commanders were able to deploy the Stonewall Brigade (four regiments) and one four-gun battery. The Stonewall Brigade advanced quickly to secure the stone wall on Sandy Ridge and the artillery deployed in support. The Union commanders though restricted by the scenario the ability to move their troops from Pritchard’s Hill was still able to deploy a forth battery and continued to direct effective artillery fire onto Fulkerson’s small Brigade and the supporting artillery battery.

The next three turns saw a major change in the troops deployed on o the battlefield. The Union Commanders gained another brigade of infantry, Tyler’s Brigade (five regiments), which went straight into attacking the Stonewall Brigade deployed behind the stone wall and in addition Carrol’s Brigade on Pritchard’s’ Hill was now allowed to redeploy in support of Tyler’s attack.

The Confederate Commander deployed his final Brigade, Burks Infantry Brigade and another battery of artillery. The final four turns of the game saw small gains on both sides. Tyler’s Brigade with the support of Sullivan’s Brigade put in a very determined charge on the stone wall and initially pushed Fulkerson’s small brigade back…..but then on during the Confederate turn they counter attacked and drove the Union regiments back.

The Confederate forces though down to low ammunition across both Stonewall’s and Fulkerson Brigade held the line…..they even made a small but determined charge out from the security of the wall and into the Union regiments. Fortunately for the Union commanders the mainly green troops were able deliver some fine volleys and drive the Confederates back over the wall.

However, on the Confederate right flank Burks Brigade was in trouble. The Union commander was able sneak two regiments from Carroll’s Brigade around the Confederate flank and hit Burks in the flank. One regiment was overrun, and another also hit in the flank was pushed back.

Unfortunately, after five hours of battle failing light hindered any further action, except a small cavalry action on the extreme Union left flank, which caused the small Confederate cavalry brigade to fall back. With neither side gaining the main objectives the battle was called a draw by both commanders. Thanks again to John, Brian, Rowdy, Dave and Josh for playing.