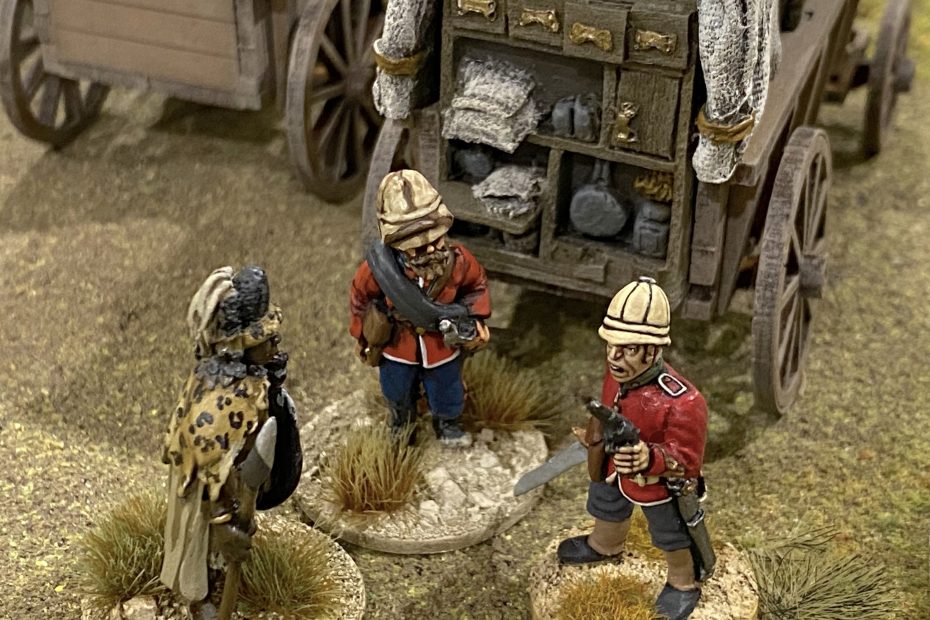 Another great evening of gaming this time taking place in mid-1879 and around the time of the 2nd invasion of Zululand. On one side, the British forces (played by Dave) comprised of five companies of regular infantry, a Naval detachment, two 6pdr guns, two companies of the Natal Native Contingent, a troop of Mounted Infantry, a troop of Lancers, and two troops of Dragoon Guards. For the Zulu’s (commanded by Warrick) forces they fielded three large Impis each comprising of five units each and two small units of Zulu warriors armed with rifled muskets.

The rules for the game were Black Powder, however as I have done before we utilised the great set of cards that come with Sands of Sudan to bring on the random attacks of the Zulus. This worked very well as the British player was almost always caught off guard to where the next attack might come from and then, of course, some random card would come out that affected the British troops movement. This night a wheel fell off a wagon slowing its movement to a crawl and one of the British column commanders suddenly came down with a mild case of heatstroke, which stopped his troops from moving for two turns…..great stuff.

The rest of the game played very well with the Zulus putting on a very strong show of force and overrunning several units of British troops, however, the British were made of sterner stuff and managed to drive the Zulu off with heavy casualties.

Thanks to Dave and Warrick for playing the game and having a little fun. The figures are from a mixed collection of Empress Miniatures, Warlord Games, Old Glory, and Wargames Foundry.