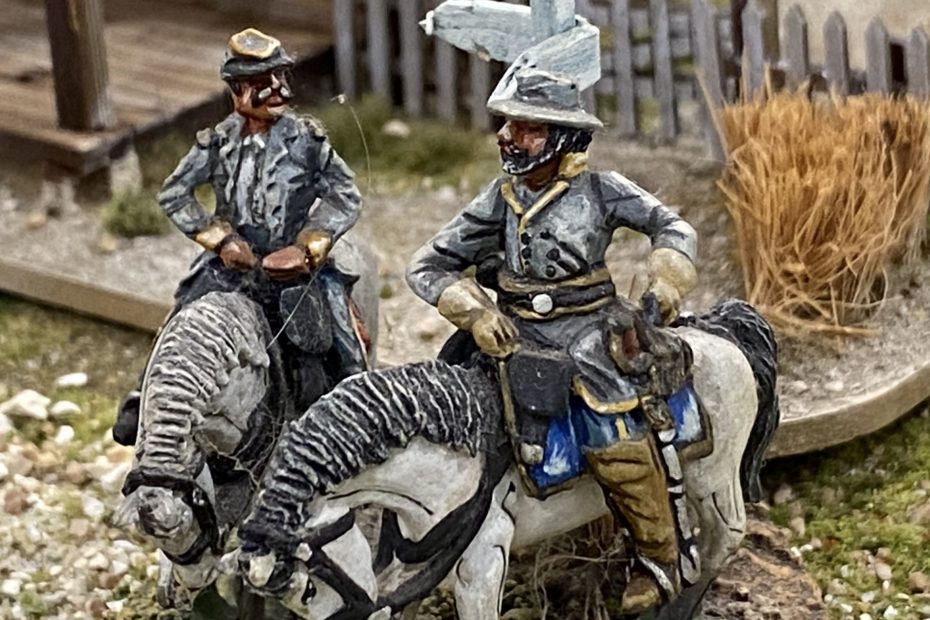 Last Sunday’s small ACW battle which was played as a small part of the Battle of Oak Grove 25th June 1862. Our scenario saw Brigadier Gen. J. Hooker’s 2nd Division, III Corps, making an attack on the Confederate forces alone King Schoolhouse Road. Four Union Brigades under the commands of Grover, Sickles, Carr and Robinson (16 Regiments) against two Confederate Brigades under the commands of Wright and Ransom (10 Regiments). Only one Union Brigade (Grover) had troops of any worth (two regiments of veteran and three of regular line troops) all the other three Infantry Brigades were made up of green regiments.

However, on the Confederate side Wright’s Brigade was all Elite troops from Georgia and Louisiana (one regiment wore the Zouave uniform) and Ransom’s Brigade were all classed as regular line troops. Each side fielded one battery of artillery.

The battle started well for the Union boys however, the woods across their initial front did slow them down a little, but Grover’s Brigade was able to quickly advance almost up to the main objective, which was King Schoolhouse Road. Sickles Brigade however spent the first turn trying to reform after a bad run through the swamps and thickly wooded terrain. The Confederates were also able to quickly deploy, with their artillery scoring a hit on the opposite unite artillery and elements of Ransom’s Brigade moved quickly up to the road and started to engage the Union infantry coming out of the tree line.

On the second and third moves both Ransom and Sickles Brigades were able to advance close to the Confederate troops now lining King Schoolhouse Road. A charge was made by Union General Grovers’s two furthermost regiments, but both suffered heavy casualties from the very accurate musket fire and were forced to fall back to the tree line to recover.Soon after another of Ransom’s regiments was forced back with heavy casualties. It was not looking good for the Union commanders. However, as luck would have it the two reserve Union Brigades of Carr and Robinson moved up to support the Union attack.

Turns four and five saw heavy musket and rifle fire all across the line. The Union commander again tried to breach the Confederate line by quickly rushing Robinson’s Brigade into the fray. Unfortunately, Ransom’s North Carolinians boys were able to hold and finally counter charge with such fury and determination that Robinson’s Brigade of green troops through away their rifles and fled from the field only been able to rally again once they were safely back in Union lines leaving many of their numbers wounded, dead and captured. It was then up to Dan Sickles and Carr’s Union Brigades to try and save the Division from disaster.

Sickles with his full complement of troops and Carr supporting his left flank tried once more to break the Confederate hold on King Schoolhouse Road. The attack quickly saw three Confederate regiments pushed back and routed from the field, however, the remaining Confederate troops managed to move on to the flanks of the Union advance enfilading the Union advance….for one Union regiment the withering musket and artillery fire was just too much and the broke.

Other Union troops held their ground and could not advance any further. Then finally with one last effort the 25th NC Regiment charged into the Union troops cowering along King Schoolhouse Road. It was too much for them and Sickles Brigade began a slow withdrawal from the field. Victory was achieved for the Confederates. They had destroyed two Union Brigades and forced another to withdraw.

The King Schoolhouse Road was still in their possession though at a very heavy price, Wright’s Brigade casualties were over 60% and the Brigade was rendered ineffective for the rest of the campaign. Well done to Dave Lowe and Tim Jolly for commanding the Confederate troops and Brian Buskell for commanding the Union boys. A great afternoon of fun playing Blackpowder 2. Thanks also to John Maguire who graciously allowed the use of his figures.