A Skirmish Between The Lines – ACW

Another evening of Sharp Practices, this time we moved into the American Civil War with the armies compiled from the examples in the main rule set. Dave and John played the Confederate Commanders I the Union Commander. The scenario we picked was ‘Sweeping the Field’, which both sides had a mission of sweeping the field for supplies.

However, only the highest roll (for starting the game, which was the Confederates), started to deploy first. The lowest roll (Union…Me) had to roll two dice for every time a command card was turned and once I had reached a total of 14 I could start to roll.

It was not all bad as I got to deploy one unit of skirmishers and move my manoeuvrable point closer to the rebel flank. By turn two we all had our troops on the board and the first casualties went to the Confederates though they did eventually get one of their skirmisher units into a good position to tie down my skirmishers and force me to deploy my main Union forces on that flank.

By the fifth to seventh turns my Union boys were doing well and inflicting some heavy casualties on the Confederates, however in the next turn the Confederates advance from behind the protection of a rail fence, fired, yelled the Rebel Yell and decimated a Union regular unit, knocking out the commander and breaking the boys in blue.

The Force Moral from this point started to go down fast.The next two moves saw the Confederates advance and wheel onto my main unit’s flank and deliver two well aimed volleys (they used the old four flag cards on me), causing double shock and forcing the boys to withdraw.

By the next turn both my skirmisher units were destroyed and my force in tatters…..with no flags left and the last skirmisher commander killed victory went to the Confederates. Well done John and Dave for a great victory and a great evening of gaming…not to mentioned very entertaining. It was also good to see my buildings finally made it to the table. 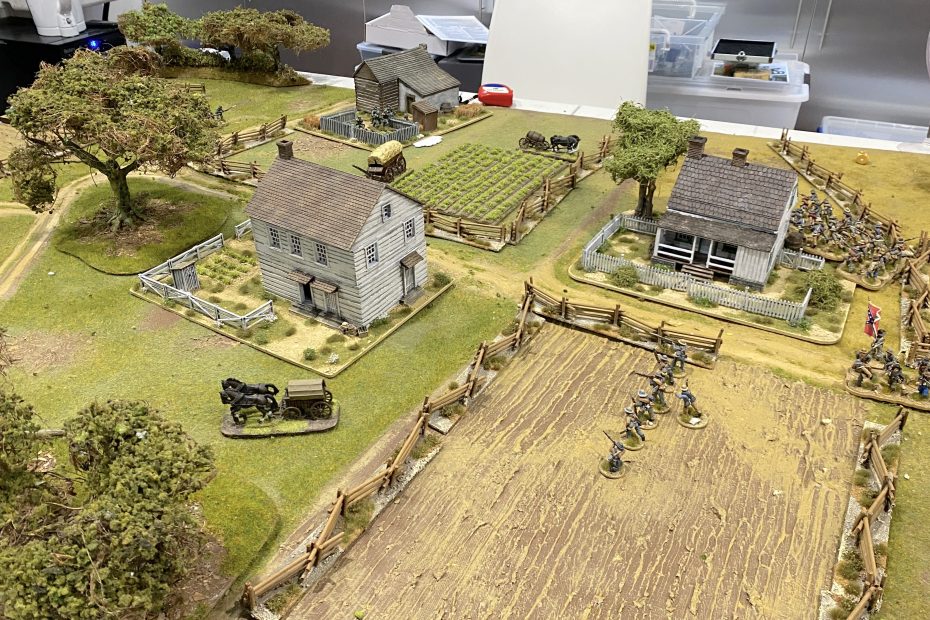