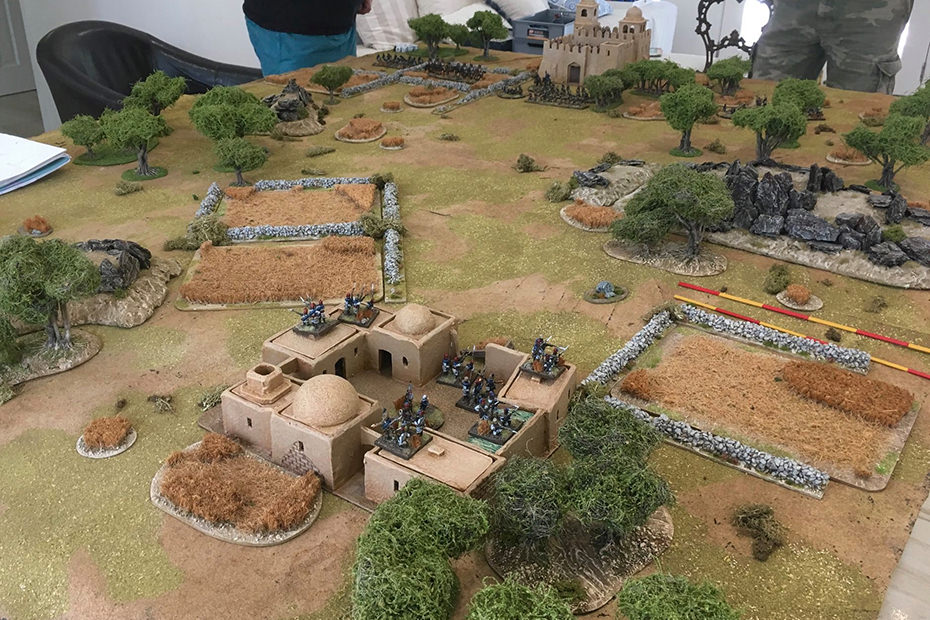 Last Sunday the lads played a great little Colonial game set in the heart of Africa or should I say Northern Eritrea where the Italian Colonial forces were trying to stop the incursion of Mahdists forces into their territory. On one side were three regular companies of Italian infantry, four companies of Italian Ascari infantry, two light Italian guns, a unit of irregular horsemen, and some locally raised warriors levy. On the other side were five warbands of Mahdist warriors from East Sudan, two elite warbands of Sudanese foot soldiers, two Mahdist mounted warriors, and four units of riflemen.

The scenario was for the Italian main forces to move out from the old slaver fort and rescue two companies of Ascari besieged in a small village just to the east of the fort. Dave Lowe and Terry Moran were the Mahdists commanders and Tim Jolly and Myself took the command of the Colonial Italian forces.

The rules were decided to use were based on the Basic Impetus rule set. The Mahdist forces were treated as warbands, all cavalry we classed as CL, and the Italian forces were classed as T units. It was pretty easy to convert the tables to reflect the troops on the tabletop. I gave the warbands the PBW ability and the Elite Warbands had various weapons to allow them to shoot if required. The rifles armed units were given either the range of longbow A or B depending on the troops quality. As we were all very familiar with how the rules worked the game flowed very well.

The game was fairly straight forward with the Mahdist forces charging in the good old fashion of straight up the table. We did expect a flank attacked or two but the Mahdist commanders were not up to it on this day…..thank goodness. The charges were very hard to stop on many occasions and the Italian troops took very heavy casualties in hand to hand combat, losing two companies of Ascari infantry and both light guns. However in the end the firepower of Italian troops proved just too much for the Mahdist forces and they were run off the field of battle. Overall a great afternoon of fun.